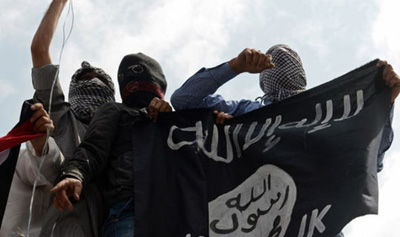 SAN BERNARDINO, Ca 12/3/15 – has anyone noticed what follows every time there is an obviously Muslim mass shooting? The Obama Administration first blames the NRA, and then says to not 'jump to conclusions, that this is probably simply a case of workplace violence...so he saith.

Surely you remember this tactic from the Ft. Hood massacre by a Muslim service officer who was foolishly allowed into the U.S. Military with a position of authority. It took days to finally hear the truth, a truth of which most everyone was duly aware.

These truth delays (think tooth decay) allow Obama to first allow passions to simmer (we must not be angry at Muslims doncha know) while hammering home that THIS is why we must get rid of our guns. This is part of his stalling for time.

As usual, when the San Bernardino Islamic murders took place at a Social Services office, killing 14 and critically wounding 21, the authorities say they have no proof that this was a "terrorist'" attack. (?) Furthermore, they don't know the identities of the shooters nor their race or possible ethnic origin. Yep, they have no idea. Residue of a bull!

First of all, the name of one of the shooters was, Syed Rizwan Farook with the other shooter, a woman, named, Tashfeen Malik. This was learned almost immediately, but they did not want us to know since they had distinctively Muslim names. It was later learned that the female was his wife whom he had met on a dating site. In fact he subscribed to two of them. They were dressed in military combat uniforms (ISIS style) with long barreled military type guns. The murder plan had been carefully orchestrated showing they were indeed on a well planned 'mission.'

FURTHERMORE, it would have been easy to get an idea where they came from. It would have been a simple matter of taking off their black hoods from their heads. Then, while everything was still in action, this report came in.

A Redlands area neighbor who lived four houses from Farook, said that a man working in the area said he noticed a half-dozen Middle Eastern men in the area in recent weeks, but decided not to report anything since he did not wish to 'racially profile" these people, while thinking, "what are these people doing around the neighborhood?" A few people saw this.

Such is the culture we live in, where society has been reminded every day that "if you see something, say something." But people are brainwashed into being fearful of being shunned as a bigot and a racist." This is constantly drilled into our heads.

The old philosophers had opinions about what we call "profiling" and "stereotyping" individuals. David Hume (1711-1776) analyzed the principle which determines one to reach a conclusion:

"The principle is CUSTOM OF HABIT. For wherever the repetition of any particular act or operation produces a propensity to renew the same act or operation, without being impelled by any reasoning or process of the understanding; we always say, this propensity is the act of custom. By employing that word, we pretend not to have given the ultimate reason of such a propensity. We only point out a principle of human nature, which is universally acknowledged and which is well known by its effects. Perhaps we can push our enquiries no farther, or pretend to give the cause of this cause; but must rest contented with it as the ultimate principle, which we can assign, of all our conclusions from experience." This explains why profiling is not a sin.

Vocativ deep web analysts discovered the sickening ISIS posts on web forums where the extremists frequently share information. "Three lions made us proud. They are still alive," one ISIS adherent tweeted in Arabic after the shootings at Inland Regional Center in San Bernardino. "California streets are full with soldiers with heavy weapons. The Unites States is burning #America_Burning #Takbir"

If you doubt the accuracy of this, you can read it for yourself as it was printed, in Arabic, below, as in all the following statements::

"God is great and he the one to be praised for that," another supporter posted in the forum in Arabic. "This is hell with god's will." But the hashtag was primarily used on Twitter where one ISIS extremist taunted the United States with a tweet that read "Let America know a new era #California #America_burning."

Another ISIS supporter posted in reference to the shooting on Twitter, "God is the greatest. May god spread fear in the homes of the Crusaders."

It would have not been complicated to learn that Syed Farook regularly attended the Riverside Mosque. As reported in the New York Daily News, his father stated; "My son was a very religious Muslim. He would go to work, come back, go to pray, come back." Recently he skipped going to Mosque, probably due to his preparing for this massacre. At the same time, Obama is preparing to bring in 100,000 more Muslim "refugees" to dwell amongst us."

Meanwhile, as we wait for the truth to be told by Obama, even though none of us will live that long, the imposter in the White House uses this info-silent time to state over and over: This shows why we MUST have stricter gun control laws.

TRANSLATION: Every citizen must be disarmed to prevent this sort of thing for their own safety. Sure. The goal is to be certain no citizens are armed so that when Obama's comrades force communism and Sharia law on America, nobody will be able to fight back, since only the bad guys will have guns while the law-abiding do not. We must NOT let this happen.

This can and MUST be stopped by getting the Communist fraud out of the Oval Office. The Congress and Senate have the power to have him immediately impeached; Better yet, arrested for treason.

There is more than enough evidence to see this done. It is up to us...yes, US, to contact our congressperson or senator to demand that this be done. Again, I am calling all patriots to respond. The time is now very short before we will all live in hell on earth if Obama manages to pull off what he intends. We CAN stop him. Call, fax, and email.