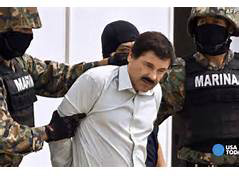 When major drug Kingpin Joaquin Guzman Loera, better known as El Chapo, was captured, there was a startling discovery. A .50 Caliber Rifle, capable of taking down helicopters was found in his armory.

When the Bureau of Alcohol, Tobacco, Firearms and Explosives checked the serial number, they discovered it to have been supplied to El Chapo by the CIA as part of Obama and Eric Holder's "Fast & Furious" brain deficit ploy that would allow criminals to buy guns in Phoenix-area shops with the intention of tracking them once they made their way into Mexico.

How's that again? This is absolutely the nuttiest, most lead-headed plan ever conceived. Think about it: Obama and our government smuggle assault weapons into Mexico specifically for criminals to use, where they would immediately be employed to kill innocent people. This would allow the feds to track down these weapons, so they proclaimed, allowing that then they could go after these criminals, knowing right where these weapons were, by golly.

Slight Pause for Shaking of head and Uttering Oaths.

It is to be noted that the ATF lost track of 1,400 of the 2,000 guns involved in this empty-headed operation. This is the third time a weapon from the Fast and Furious program has been found at a high-profile Mexican crime scene.

So WHO IS Obama? Better phrased, WHAT is Obama? We know that he came from another nation, had such great charisma, receiving such adulation that he became almost god-like and he promised peace and...change. But let's look at reality through these Scriptures:

"But the judgment shall sit, and they shall take away his dominion, to consume and to destroy it until the end. And the kingdom and dominion, and the greatness of the kingdom under the whole heaven, shall be given to the people of the saints of the most High, whose kingdom is an everlasting kingdom, and all dominions shall serve and obey him. Hitherto is the end of the matter." Daniel 7:25-27.

"And through his policy also he shall cause craft to prosper in his hand; and he shall magnify himself in his heart, and by peace (prosperity) shall destroy many; he shall also stand up against the Prince of princes; but he shall be broken without hand."

This sounds like a description of the coming Anti-Christ. Obama has spoken against the Most High, indeed declaring war on God as he thrives to make even the mention of Jesus illegal, has forbidden even military chaplains to mention the name of Jesus in their chapel services and ceremonies including funerals.

He has pushed immorality to a low never before seen in the history of America and he is insisting the entire world follow his example.. He had the White House bathed in the LGBT rainbow colors to celebrate homosexuality and has ordered this to be taught in our schools beginning with kindergarten.

Solid documentation shows that Obama is a homosexual. Indeed, Joan Rivers, seen in a clip below, stated in a news clip that "Obama is gay and Michelle is 'trans,' meaning that she was born a man.

Within 2 months following that statement, Joan Rivers unexpectedly died under circumstances that made no sense. Coincidence? You decide.

America, arise from your slumber. Obama MUST be taken from office without further delay. There are more than enough infractions committed by him including treason, to warrant his removal. The only reason it has not been done is due to the overwhelming number of Communists and Muslims in key positions of government. However it only takes a handful of key members to make this happen. It is up to us to flood the phone lines and emails of those few who ARE true patriots and encourage them to take acion.

Watch the video below for proof that yes, Obama is the anti-Christ. This video is lengthy but proves everything.