February 29, 2016
READER ADVISORY: This column contains disturbing information regarding disturbed people who kill and torture for pleasure. This story is told as it is totally independent of Political Correctness. 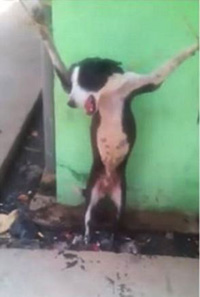 Political correctness is a term coined by Adolf Hitler and re-ignited by Obama. The two men shared a lot in common, being charismatic, dictatorial and both of them were (are) sodomites. For more info on Hitler's homosexuality and those in the Nazi Party, see the book, "The Pink Swastika."

Political correctness forbids the speaking out against any harmful group of people or against a lifestyle that is repugnant to society. For these individuals, rules of decency, restraint, morals and self control are set aside with no criticism or objections allowed as it might "offend" someone.That is the law today.

Islamists are a fanatic group of people who kill others for no other reason than to kill and make others suffer. Their "holy book," the Qur'an, instructs Muslims to kill all Jews and all who do not convert to Islam. Their book tells them it is OK to lie in order to further Islam.

Muslims are not content to merely torture and kill human beings, but they also pursue a mentally insane desire to inflict cruel torture on animals, laughing at the agony they cause them, right up to their deaths. This gives these stone-age savages great pleasure.

Muslims in Iran grab up stray dogs and injects them with acid, then laugh as the dogs cry out, twistIng in agony, as they slowly and painfully die.

Pictured is a little dog tied in a crucifixion position, its little arms stretched out and tied to a wall, crying as it is pelted to death with shoes being thrown at it and burned with cigarettes. That little dog looks like a terrier, the most loving faithful dog anyone could ever have. A little dog who had done no wrong. Dirty rotten BASTARDS!

Don't panic. That word is in the Bible to describe one of questionable birth. That uncivilized race resulted from a sinful bedding of Egyptian slave girl, Hagar, by Abraham, resulting in the birth of Ishmael who founded the Arab nations. That is where it all started. Those Arabs who became Muslims are of uncertain birth, worthy of the name, bastards.

Interesting info: Muslims have no regard for dogs. Sharia Law dictates that no Muslim can travel in any conveyance with a dog, which is why, when Obama goes on a vacation (that we pay for), he has a separate airplane (that we also pay for) for his dog to ride [in] alone. Remember, Obama was born a Muslim, his father was a Muslim and he was raised a Muslim.

We have a photo showing Muslims pushing a terrified little donkey over a cliff as they laugh. They have set a donkey on fire for fun, burned a puppy to death for fun, skinned alive a cat and cut off its head, then bragged about it on Facebook and Twitter; one Lebanese Muslim tried to microwave a screaming cat, cuts off a puppy's ear, and this is only a small sampling of the cruelties these subhumans enjoy. These people are not human beings. They are Satan's demons that were prophesied in the Bible and now, exactly as prophesied, are running loose causing destruction and overall havoc.

Their founder is Satan himself who promises them that 72 virgins will welcome them to "heaven" when they die while killing "infidels." This promise means they can have fresh sex for all eternity, which we are sure is a great comfort to the wives and girlfriends left behind. Their god is an immoral one urging murder of all while causing chaos wherever they go. The true God is one of love,order, mercy and kindness.

Muslims have been manipulated and misled with lies.They will quickly find this out at the end. There are no 72 virgins awaiting them, only eternal flames of fire. It is hoped that at least some of them will wake up. Many have when Jesus appeared to them in their dreams.

First of all, Islam is not a religion. It is a political murderous cult. A religion is a community of people who wish to become better people and claim a particular deity. Islam exists to murder, kill and rape at will. They bomb what they call "soft targets," meaning targets safe to attack without consequences, such as schools filled with children, hospitals and convalescent homes, people who can't fight back. They are, in reality, cowards.

It is nails scratching on the blackboard when publications and politicians call Islam "one of the three great world religions." Islam is not great nor a religion.

Islam is a cult that encourages pedophilia, sex with very young children. Muslims think it is OK to say that a 6 year old girl is 'sexy.' They are free to rape any woman, any child, even toddlers in diapers, without consequences. They have child brides, plural, since they can have three or four. That has become an issue in this so-called "refugee crisis," where Muslims are storming the borders of various counties and demanding not only accommodations and support for themselves, but also for their child brides.

But WAIT! Political Correctness says that we cannot stereotype or profile anyone, no matter what that group does or what their normal lifestyle and habits are, even though their behavior has been observed consistently and they have a propensity to renew the same acts of operation.

Philosopher David Hume (1711-1776) stated: "We only point out a principle of human nature, which is universally acknowledged, and which is well known by its effect. We can assign all our conclusions from experience. Custom, then, is the great guide of human life. It is that principle alone, which renders our experience useful to us, and makes us expect for the future, a similar train of events with those which have appeared in the past."

So what is a Christian to do with these creatures who state they want to kill us all? Well, one woman stated that we need to sit down and talk with them,talk some sense into their heads to make them change...in other words, send social workers to them to determine why they hate us so much, by golly.

Should Christians simply be passive, or indeed, should we fight back. Jesus makes it clear what we are to do. He ordered God's people to fight, conquer and slay people who were determined to harm them. Jesus made it clear in Luke 22:36: "Then he said unto them, but now, he that hath a purse, let him take it, and likewise his scrip: and he that hath no sword, let him sell his garment (cloak) and buy one." Obama, gun grabbers, take note.

And what would God say about this? "Write: for these words are true and faithful." Revelation 21:5

We are indebted to Kelleigh Nelson who hosts the Exposing Modern Mugwumps news site, for alerting us to this story about the cruelty of Muslims toward animals.