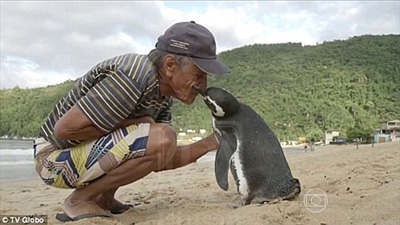 If I had one last thought to leave for the world before cashing in, it would be this: Look for the humanity in every creature....yes....EVERY creature. It is definitely there. And be kind to all of them. What a delight when one discovers this.

It will not only expand your life's horizons, but make you a better person in the process with an unexpected joy. Every creature has a distinct personality that will astonish anyone who takes the time to discover it.

This does not just apply to animals like dogs, cats, horses or creatures like elephants, tigers and chimps, but also to birds, including seagulls. Others, not necessarily considered thoughtful, have proved otherwise as will be seen in these examples:

Not too long ago a diver came upon a big tortoise trapped in netting floating in the ocean. The diver, knowing it was in agony and could die, made his way to the tortoise and with his knife, cut all the cords away, freeing the mammal which then swam away. But...ASTONISHINGLY, it turned around and swam back to the diver, right up to him and put its front feet on the chest of the diver, as if to say "thank you," then swam away. We saw the video which warmed our hearts.

So what about Penguins? We think of them as mysterious and comical, but do they actually have humanity? More than you think, the same as any other creature.

As reported on AOL News, in the year 2011, a Brazilian man from an island village near Rio de Janeiro stumbled upon a little penguin covered with oil from a spill, and starving to death since he could not move effectively.

The man, Joao Pereira de Souza who is 71, a retired bricklayer and part time fisherman took pity on the little bird, took it home and nursed it back to health, named it Dindim, then set it free back in the wild.

A few months later, the penguin returned to visit him, yes, sought him out and went right to him. What is more, Dindim, swam 5000 miles to return to him. He had been in Argentina and Chile to mate, then came back to de Souza. The penguin spends 8 months of the year with him, and then returns to Argentina and Chile. He arrives each year in June, and then goes back out in February.

De Souza said to Globo TV, "The penguin becomes more affectionate each year, as he appears even happier to see me. I love the penguin like it's my own child and I believe the penguin loves me."

The love the two have for one another is shown in the photo. You can see the story along with videos of the friendship at this link: http://www.aol.com/article/2016/03/08/adorable-penguin-swims-5-000-miles-every-year-to-visit-man-who-s/21324843/

And watch for a book with similar stories: Angels Unawares-4 legged ones – What the Church Didn't Teach Me, I learned from my Poodle, which is coming out any day now.