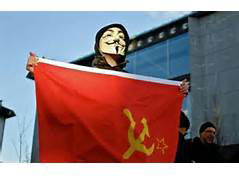 DISCLAIMER: This piece does not signify endorsement of Trump or any other political candidate by this writer. It is an analytical report on the state of a nation in the midst of destruction and distress.

MIAMI 3/19/16 – How many citizens have been angered to the extent that they wanted go nose to nose with the political leaders of today, and confront them over how they have driven our country to ruin, immorality, financial collapse and chaos? And how many would, if given the opportunity, kick them out of office and put someone in who would run it better (which would be ANYONE other than Obama)? The majority of America. that's who.

One citizen did just that, became a presidential candidate and right from the beginning has found overwhelming support of fed-up citizens, millions of Americans who want him and back him.

Even so, Donald Trump has found himself a target of mass protests. There was one today, so vile that the "protesters" cut the head off an effigy of Trump to demonstrate their hatred, as the crowd cheered. Isn't that an ISIS maneuver?

There have been threats to his life prompted by the leftist media with their vicious attacks without letup. Despite his massive support by Americans, they claim that he will destroy the Republican Party and that HE stirs up hate in his own rallies.They make the ridiculous charge that he will destroy democracy.How's that again? This IS democracy. And it is Trump who is stirring up the hatred of Americans? Not quite. It is the paid protesters who stir up the hate, not The Donald.. The solid support he has received from American voters proves him to be a viable candidate.

However, the war declared by George Soros and the Communist Party USA is not a war against Trump. Now think! It is a war against a free people who are determined to not come under Communist domination. Yes, that war is against us, you and me who want a democracy.We are the ones who stand in the way of their goals by wanting to choose our own leader.

They want to put in the person of their choice, who will carry out their ideals, like Obama. THEY want to choose our leaders, instead of us. We have demonstrated that we the people insist upon being in charge of government, which was established in our Constitution, NOT for the government to be in charge of the people. So we are the ones they have declared war against, the American people, since we have shown we will put in the leaders we want.

Let's not allow ourselves to be manipulated by the corrupt media that pushes Communist rule. Think for yourselves and stand firm when you do.

Here is another factor to consider if you vote for Trump. The following have stated that they will leave America and move to Canada if Trump is voted in:

This is an outcome of voting for Donald Trump. Would we really want those people to leave the U.S.? A decision must be made.