Rev. Austin Miles
Radical interpretation of Islam? Not so 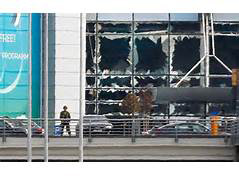 BRUSSELS 3/22/16 – The brutal sneak bombing this morning in Brussels which killed dozens of innocent people has been dismissed by Muslims living in America who, on TV, described these murderous Muslim attacks as only, I kid you not, a "radical interpretation of Islam." Really?

Unfortunately for the world, what was experienced today in Brussels proves that this is an accurate interpretation of Islam, as stated in Muhammad's own words. The "radical interpretation" is not a deviation from the words as they try to convince us. The very words written in the Koran, which is the guide book for Muslims, is exactly as written and meant to be followed verbatim. It is all clearly there. There are no excuses.

These are very evil people who kill at random, murder, rape children (which is OK according to Islamic Law) and it is evil for the sake of evil, the very agenda of Satan himself, which should give a solid clue as to who these stone-age savages really are.

And by the way, those three Muslims who deliberately killed and maimed so many people in Brussels will NOT be met by 72 virgins in "heaven." They will be welcomed by one evil creature surrounded by flames where they will scream in agony for all eternity.

The book of instructions regarding Islam, the Koran, is their so-called, "Holy Book." It instructs Muslims to "slay infidels (anyone who does not become a Muslim) wherever you find them, to lay in wait and kill all Jews, to extort money out of all unbelievers, cutting off heads (and instructing, now get this), that it is proper to lie in order to advance the cause."

All the murderous 'sutra's can be found on Google. They have already been widely published and are easy to find. Yet countries around the world have been conned into removing their borders and welcoming all comers under the umbrella of 'multiculturalism,' since, after all, there are good Muslims, so they say.

The world must close their borders and have strict guidelines for immigration. This has become so out of hand that Islamic training camps have been set up throughout the U.S.! Yes, you read that right.

This is insanity! One is in New York State where no one can enter the gates including law enforcement or our military. Behind the gate, Muslims are training to carry out such carnage as the one in Brussels this morning, which they thoroughly plan to bring to your community.

Of the presidential candidates Donald Trump stated emphatically that he would capture and use water boarding or whatever else is needed to extract information from those captured. He would close the borders and have the military invade the Muslim training camps, tear them down and imprison all those who are being trained. He would show toughness, which does make an impression on Muslims. They are really cowards who run from toughness.

Hillary disagrees, saying, "No, that would not be humanely right, besides this would just propel more recruits for Islam." Yep, a message straight from HELLary. Bernie Sanders did not seem too concerned. Ted Cruz, I am convinced, would take a firm stand in getting them out. John Kasich? Forget it.

And where is Obama? During the international disaster today, he went to a ball game in Havana and is next going immediately to Argentina. He would not interrupt those activities to come back to America and demonstrate some leadership during an international emergency. Even so, he would not do anything drastic to his own people.

The House Speaker long ago should have ordered the Sgt. at Arms to escort Obama out of the Oval Office. There are multitudes of reason to do this including Treason, Derelict of Duty, Giving Aid and Comfort to the Enemy, which only addresses a couple of tangible issues.

But wait, isn't Islam a "religion of peace?" It must be, since George Bush made that reference while standing in the ruins of the World Trade Center Towers. And yet, that is what "moderate" Muslims are trying to fry into our brains.

The only way a Muslim should be trusted is if he renounces the Koran and the mosque, having nothing to do with them and living a trustworthy life. But they can do that only up to a point if they still go to mosque and read The Koran. That point is reached when they are told to serve Allah. Then watch their charming personalities drastically change.