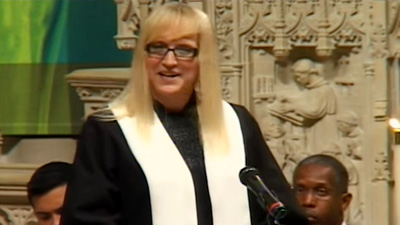 WASHINGTON, DC 4/25/16 – Each day every newspaper will have one or two feature stories about transgender accomplishments. This is the new-age rage in a world gone mad.

Sexual confusion, where each sex thinks they are another sex, while demanding that the people accept who they SAY they are, has now paved the path for those who disagree or even show disgust, finding themselves under the threat of facing costly lawsuits if they don't agree that a clearly identified man is a woman.

Why after all, to not accept what someone says they are is hurtful and discriminating, doncha know, which promotes homophobia and stimulates hatred. So go along with sick perversion or be sued with full government support against the "offender." This has resulted into unprecedented rights to sexual perversion.

The latest is in the Nation's Capitol, where Calvary Baptist Church just installed a transgender man dressing and pretending to be a woman, as the pastor of this Christian church!

This in itself is blasphemy, since the very appearance of this transsexual in robes of a Christian leader, standing behind what is to be considered the sacred pulpit where only the uncompromised Gospel of Jesus Christ is to be spoken, constitutes a sick mockery of God at every service. Yet the Baptists are horrified if they find out someone in the church has been out dancing.

First of all, God did NOT create transgender people. He created man and woman. That cannot be changed and it is a sin against God to try and do so.

Has the church of Jesus Christ totally lost its stirrups? What idiots on the church board would allow this outrageous appointment? This is nuts! And what kind of example does this set for children coming to church? They are to come to Sunday school and church to become enlightened, not confused by seeing a man dressed up like a woman prancing about on the platform.

This newly installed "pastor" says he is a woman, dresses in women's clothing and now, listen closely dear readers; evangelizes for homosexuality. So that now is the Sunday morning message these days? With Obama sitting in the Oval Office, you can bet it is.

This preacher creature recently told a gathering of numbskulls that the "Angel of Reason" told him the Bible was wrong, all wrong, in its teachings on sexual morality."

And it is to be noted that his "hymnal" does not contain worship music or hymns, but music of Bob Dylan, Bruce Springsteen Tupac and Beyonce.

So where is the Baptist Church Officials in all of this? Why haven't they put a stop to this madness before it started?

The Church of Jesus Christ is commissioned to preach morals among other things. It is immorality that has been the direct cause of the chaotic crime-ridden society we now live in. Once immorality, as orchestrated by Obama, became the norm for society, it opened the door for all evil since no one feels any constraints of conduct, there is no right or wrong, and they can take anything or anyone they want for self satisfaction.

There are now no values, and what is worse, no class or decorum among the people, thanks to the rainbow colored building that once was called, The White House.

Pastors, church leaders, church board members and all Christians who are sincere in their beliefs, it is up to you (us) to put a stop to this insanity that has now overtaken America. Put together committees to tackle these kinds of issues that try to contaminate our churches and put the pressure on those who would disrupt the workings and mission of the church.

And there is another very useful tool when people come to disrupt church services with inside protests and demonstrations or simply to be a distraction. There is a law on the books that it is a felony to disrupt a religious service. Do not hesitate to make a legal complaint based on that law.

We can no longer simply sit back quietly as our churches and some of our pastors flagrantly violate the very mission of the church and ministry we have been called to serve.

"WOE unto them that call evil good, and good evil; that put darkness for light and light for darkness, that put bitter for sweet and sweet for bitter." Isaiah 5:20

Our thanks to Lee Duigon for picking this up from barbwire.com and publishing it on americanprophet.org which alerted us to this story.

Photo Caption: Changes at the Pulpit