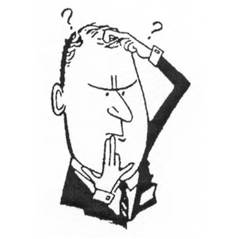 It is always good to start each day with a laugh. Indeed, I would never leave home without it. My first laugh of the day is found in the local morning newspapers, which usually keeps me lighthearted for the rest of the day.

For instance, one news story told of a truck driver in California on a busy freeway rushing to his destination, when the merchandise he was transporting spilled out on the road while rounding a curve, causing a two hour traffic delay. The driver was delivering a truck full of condoms.

With great though and journalistic skill, here was the headline The Chronicle crafted: "Truck Driver Spills His Load on Busy Freeway." I had to pick myself up from the floor when I saw that one. Every day those headlines pop up and some stories are so botched up in general that you can't help but laugh.

Pay close attention to your morning headlines and some of the news descriptions of the happenings of each day and what you detect may make your day a fun day.

My anonymous minister friend, who also has a sense of humor, helped me gather up some real classic blooper headlines. Don't be drinking coffee when you read these:

***Man Kills Self Before Shooting Wife and Daughter

This one I caught in the Tribune the other day and called the Editorial Room and asked who wrote this. It took two or three readings before the editor realized that what he was reading was impossible! They put in a correction the next day.

***Miners Refuse to Work after Death

See if that works any better than a fair trial

I can see where it might have that effect

***If Strike Isn't Settled Quickly, It May Last Awhile

Who would have thought it

They may be on to something

You mean there's something stronger than duct tape?

He probably IS the battery charge

That's what he gets for eating those beans.

Chainsaw Massacre all over again

***Hospitals are Sued by 7 Foot Doctors

Boy, are they tall!

Did I read that right?

The Bible tells us that It is good for your health to have a sense of humor.Take heed: "A merry heart doeth good like a medicine: but a broken spirit drieth the bones"

Have a fun day. MilesTones