Rev. Austin Miles
Do refugees enrich cultures of the world? 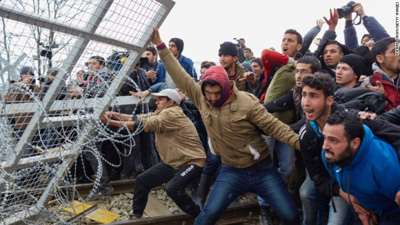 A major problem in countries throughout the world is the flood of Immigrants and refugees demanding to enter any country they wish and be afforded all benefits of the citizens of that country. They are now coming in groups of thousands, overwhelming the borders as they force their way in while demanding that the involuntary hosts of those countries assimilate into THEIR culture.

How different than the early days when immigrants came through Ellis Island. They were a different breed of people. They left everything behind to come here to carve out a new life. Before coming they learned to speak English so they could more easily be a part of our culture.

They did not come for handouts. They did not demand any kind of benefits or special treatment. They fully intended to support themselves and their families and to contribute to their new country. Their first goal was to become a United States Citizen, and studied to pass a test that granted that privilege. The day of the citizenship ceremony was, to them, the greatest day of their lives. They loved America and its flag and would proudly say, "I am an American!"

It would have been unthinkable for a refugee to come to America, and then form mobs to demonstrate against the structure of this country, criticize it, and to publicly burn the American Flag, or to take down a flag and put up the flag of their home country.

Muslims are trying to force their Shariah Law as the law of the land in the U.S. and have set up numerous ISIS training camps throughout America. They have "no go" zones in Europe, their own territory in the various cities. Plus they have brought with them their own perverted culture including having child brides, many as young as seven, and instruct their young men that it is OK to have sex with a child.

One young Muslim raped a 7 year old girl in Idaho and the Obama appointed Regional Attorney General let the rapist walk with no charges.

This letter was recently received from a woman physician in Munich, Germany who sent this message to the world:

"Yesterday, at the hospital, we had a meeting about how the situation here and at the other Munich hospitals is unsustainable. Clinics cannot handle the number of migrant medical emergencies, so they are starting to send everything to the main hospitals.

"Many Muslims are refusing treatment by female staff and we women are now refusing to go among those migrants!

"Relations between the staff and migrants are going from bad to worse. Since last weekend, migrants going to the hospitals must be accompanied by police with K-9 units.

"Many migrants have AIDS, syphilis, open TB and many exotic diseases that we in Europe do not know how to treat.

"If they receive a prescription to the pharmacy, they suddenly learn they have to pay cash. This leads to unbelievable outbursts, especially when it is about drugs for the children. They abandon the children with pharmacy staff with the words: So, cure them here yourselves!

"So the police are not just guarding the clinics and hospitals, but also the large pharmacies.

"We ask openly where are all those who welcomed the migrants in front of TV cameras with signs at train stations? Yes, for now, the border has been closed, but a million of them are already here and we will definitely not be able to get rid of them.

"Until now, the number of unemployed in Germany was 2.2 million. Now it will be at least 3.5 million. Most of these people are completely unemployable. Only a small minimum of them have any education. What is more, their women usually do not work at all. I estimate that one in ten is pregnant.

"Hundreds of thousands of them have brought along infants and little kids under six, many emaciated and very needy. If this continues and Germany re-opens its borders, I am going home to the Czech Republic. Nobody can keep me here in this situation, not even for double the salary back home. I came to Germany to work, not to Africa or the Middle East!

"Even the professor who heads our department told us how sad it makes him to see the cleaning woman, who has cleaned every day for years for 800 euros and then meets crowds of young men in the hallways who just wait with their hands outstretched, wanting everything for free, and when they don't get it they throw a fit.

"I really don't need this! But I am afraid that if I return home, at some point it will be the same in the Czech Republic. If the Germans, with their systems, cannot handle this, then, guaranteed, back home will be total chaos.....

"You – who have not come in contact with these people have absolutely no idea what kind of badly behaved desperados these people are, and how Muslims act superior to our staff, regarding their religious accommodation.

"For now, the local hospital staff have not come down with the diseases these people brought here, but with so many hundreds of patients every day this is just a question of time.

"In a hospital near the Rhine, migrants attacked the staff with knives after they had handed over an 8-month-old on the brink of death, who they'd dragged across half of Europe for three months. The child died two days later, despite having received top care at one of the best paediatric clinics in Germany. The paediatric physician had to undergo surgery and the two nurses are recovering in the ICU. Nobody has been punished – what ???

"The local press is forbidden to write about it, so we can only inform you through email. What would have happened to a German if he had stabbed the doctor and nurses with a knife? Or if he had flung his own syphilis-infected urine into a nurses face and so threatened her with infection? At a minimum he would have gone straight to jail and later to court. With these people so far, nothing has happened – WHY?

"And so I ask...... where are all those greeters and receivers from the train stations? Sitting pretty at home, enjoying their uncomplicated, safe lives. If it were up to me I would round up all those greeters and bring them here first to our hospitals emergency ward as attendants! Then in to one of the buildings housing the migrants, so they can really look after them there themselves, without armed police and police dogs, who, sadly today, are in every hospital here in Bavaria'.

Actually, they have already come to our country.

Obama has no intention of putting a stop to this invasion. Indeed he is encouraging it, and has made it known that he will be bringing in 10,000 more migrants, and working up to a million.

Please vote carefully. Which of the two candidates will put a stop to this? We do know that Hillary will be a continuation of Obama. She will do NOTHING to stop this refugee crisis, indeed, she will encourage it.

There are those who are turned off by Trump's personality. Forget personality and simply focus on the one who WILL put a stop to this invasion of America.