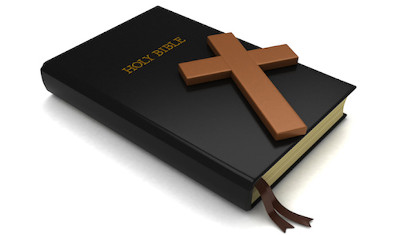 Christian complacency has led to this latest offense against God which is now backed by Obama's robot administration and enforced by the anti God U.S. Government Courts, making it official that God and Jesus must be hidden from sight. This has sadly taken root in the United States Armed Services.

An active duty Marine was recently court-martialed for posting a Bible verse in her workspace cubicle. That verse? "No Weapon Formed Against thee Shall Prosper" Isaiah 54:17.

Her superior ordered her to take it down. She refused and next was subject to Court Martial, which means that one is being prosecuted for a federal crime, and now she has a federal criminal conviction on her record for....now get this...for not removing a Bible verse from the wall of her work space.

The U.S. Court of Appeals for the Armed Forces (CAAF) said the Religious Freedom Restoration Act (RFRA) did not apply in this (Sterling's) case. The CAAF upheld the court-martial and dismissal from the service for this former Marine Lance Corporal, Monifa Sterling who had served honorably.

Attorney Mike Berry of First Liberty Institute said that the court rejected her argument that her faith was protected by RFRA.

According to OneNewsNow journalist Steve Jordahl, Daniel Blomberg, legal counsel for The Becket Fund for Religious Liberty, filed an amicus brief in the case. Like Berry, he believes the decision sets a bad precedent – one that's "very dangerous" for other service members.

The next step being considered is The U.S. Supreme Court.

It is outrageous that a young Marine is court-martialed for using a Bible verse for comfort. Being in the U.S. Military offers many uncertainties in life, so why all the fuss about a helpful Scripture verse that states: "No weapon Formed against thee shall prosper." This writer, a veteran, knows what those uncertainties are while on active duty and that very verse gave comfort to me as a new soldier.

Let's take another look at that entire Scripture Verse that has caused such outrage by the U.S. Government: "No weapon that is formed against thee shall prosper; and every tongue that shall rise against thee in judgment, thou shalt condemn. This is the heritage of the servants of the Lord, and their righteousness is of me, saith the Lord." Isaiah 54:17.

It would be highly recommended that Obama and his manipulated government take this Scripture verse seriously. It is for certain, that he WILL in the future.

Those who reject Trump will go to Hellary.