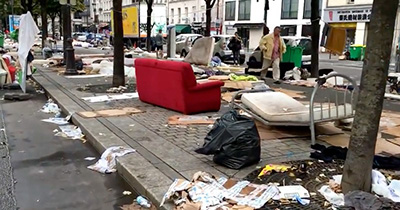 COUNT DOWN! With only a couple of days to go before the election, it is incumbent upon ALL voters, especially those in California, to demand that the State Board of Elections STOP all further voting in that state until each vote (already cast) is thoroughly scrutinized, since Gov. Jerry Brown has sneakily opened the door for approximately 6 million illegals – non citizens – to vote.

Now this becomes a national issue since those who are in California illegally can indeed tilt the national vote in Hillary's favor. See the full documented story at this link:

There has been talk of the breakout of civil war during this election, no matter who is "elected." That is in quotes since the election is absolutely rigged for Hillary (as it was for Obama) to be ushered into the Oval Office in order to complete the destruction of this country. Plus, ISIS has threatened attacks in this country the day before the election. Don't let this stop you from voting. Security will be strong.

Indeed, Saudia Arabia and the Govt. of Qatar are the financiers of ISIS AND...HILLARY CLINTON! Computer Technician Timothy Vaughn Jr., alerted us today about this. Here is that link: http://www.ibtimes.com/clinton-isis-funded-same-money-wikileaks-assange-says-saudi-arabia-qatar-giving-money-2441644

This was all carefully thought out as the countdown to this election began. As pointed out earlier, Obama has orchestrated a crisis scenario that would become a "national emergency" paving the way for him to impose Executive Order 13603. This will put America under military control, and he can then proclaim himself President (Dictator) for life.

This is what we are facing at this moment. Citizens must immediately demand that all votes by illegals be tossed, meaning every California vote must be recounted and confirmed before Tuesday, which could cause a delay in showing results. And yes, Obama has eagerly anticipated this delay.

In any case, all registered voters, especially evangelicals, since their numbers are so high, must go to the polls to show our strength in numbers. Your vote determines the future of the U.S and, we the people. Remember, we are not voting for a person. We are voting for a government.

Voting Hillary? You will get open borders, meaning that anyone at anytime can simply barge into the country, including millions of Muslims, who can set up shop and immediately go on welfare, food stamps,housing, medical assistance and education, at OUR expense, while they orchestrate Jihad upon us from inside.

All this, while at the very same time, we have thousands of homeless veterans on the streets who get no help whatsoever, yet we give help and nurture those "migrants" who do not belong here in the fist place and show up to trash our country.

The results of that can be seen in the photo taken in a city center park in Paris. France was a very elegant country with manners, and a high standard of living. Then the feeble-minded allowed Muslims to come in and take over, resulting in that country becoming a slum. Wrecked! You can find more photos of this on Google. And that is exactly what will happen to America. Multiculturalism does not work. Assimilation does.

Also, vote for Hillary and you are guaranteed no less than 5 million babies who will be viciously slaughtered in the womb since they are considered inconvenient to those who want to live their lives unhindered and free from any responsibility. And that is just a small portion of what to expect if you allow that very wicked woman to become "Commander in Chief." God forbid!

Indeed, those who would actually vote for her, considering what damage she will do to every American, would have to be considered mentally unstable...more accurately....stupid.

Take time to think of these questions, provided to us by Radio Host Bob Boyd of Issues in Education (a program heard on 700 stations), before foolishly allowing yourselves to be influenced by her:

> If you are Gay, why are you voting for Hillary? She wants to bring in hundreds of thousands of refugees that believe all Gays should be executed.

> If you are Black, why are you voting for Hillary? She admires Margaret Sanger and defends Planned Parenthood. They want to abort as many black babies as possible. "Exterminate the Black Race because they are like weeds." Most of those clinics are in Black neighborhoods.

> If you are a Christian, why are you voting for Hillary Clinton? She wrote her Senior Thesis on Saul Alinsky. He dedicated his book "Rules for Radicals" to Lucifer, The Devil? She says he was and still is her mentor.

> If you are a Veteran, in the military, or closely related to a military member, why are you voting for Hillary? She left those men to die in Benghazi and had the nerve to lie about it over and over again. They called for help but the help was told to stand down. And yes, men died including the Ambassador.

> If you have factory job, why are you voting for Hillary? She supported TPP. Factory workers are being laid off because jobs are going overseas.

> Don't forget the deals she made with China. She also welcomes open borders and for illegals to get benefits with YOUR tax money.

> If you are poor, why are you voting for Hillary? She is supporting Wall street and all the big banks. Big banks keep the poor, poor by destroying the poor man's credit by allowing medical bills and collections to affect your credit scores so you can pay higher interest rates than the rich. – Taking as much of the little money you earn.

> If you are a woman, how can you vote for Hillary? She has buried all of Bill's rape victims under the rug. Remember the little girl that was raped? She defended the rapist, got him off, and laughed about it later.

> If you carry a gun, and believe in the Constitution, how can you vote for Hillary? She wants to eliminate the NRA, take your guns, and abolish the second amendment.

> If you breathe, why would you vote for Hillary? She has left a trail of dead people that did not agree with her or knew too much! And these people did NOT die natural deaths.

Forget his personal flaws. Donald Trump is the ONLY one who can put a stop to this destruction of our country.