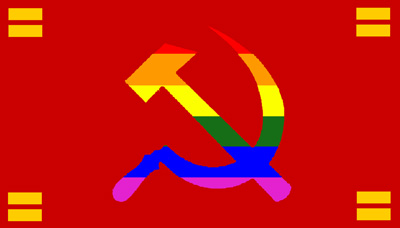 A current movie, Beauty and the Beast subtly introduces homosexual perversion by showing two leading males kissing, which gives new meaning to the description, 'A Fairy Tale.' Notice how subtle that kiss was presented. So subtle that movie goers, including kids thought, 'did I just see that?' This is a part of the gradual indoctrination of accepting sexual deviance. Most films today push immoral and social-political ideology.

This flick was produced by Disney Films that lost its original focus on wholesome family entertainment after the death of the founder, Walt Disney. Disneyland Park has since become a haven for the LGBTQ crowd who work there and who stage their own 'Gay Days' at the park which is packed with children.

When this columnist attended the opening day of Disneyland by special invitation, there was no clue that this fantasy land would go down into the toilet of sexual perversion. Those of us who were there would have been shocked at even the suggestion.

Remember how subtly bad language entered into motion pictures? In the famous closing line of Gone with the Wind, Clark Gable answered Vivien Leigh who was sobbing, "What's going to happen to me?" "Frankly my dear," he said out the side of his mouth, "I don't give a damn!" Everyone in the audience gasped. Never had a swear word been heard in a movie. It was never expected.

Of course that term would be used again, advanced into crude then vulgar terms until today the "F" word is prominent not only in movies but on television and stage plays.

This minister-writer worked in films years ago. They were family friendly then but gradually things began to change. I once got fired from a film in New York because I would not use God's name in vain. Even though I told the producers that I could exhibit the same emotion without cursing God, they axed me and actually brought me up on charges for refusing to say those words.

On the bright side, as a result a rule was established by Screen Actor's Guild that would excuse any actor or actress from being penalized for not doing something they knew nothing about in advance, such as nude scenes or cursing.

The final straw for me was when I was called by my agent to be in a movie to be shot in San Francisco. "However," the agent said cautiously, "there IS a scene where a man would put his hand down the front of your pants." Of course I refused saying, 'that's not for me.' The agent humbly apologized for even suggesting me for that film. The last film I worked in was a Hallmark Christmas movie in 2004. Following that, show business was relegated to the distant past.

None of this cinema manipulation came by accident or simply circumstances. The Communists realized very early on that the greatest teaching tool on earth is not the colleges or ivy league universities, even private tutors, but the motion picture industry, yes the movies, which can dispense more glamorous propaganda than all the learning institutions in the world.

Compelling actors and actresses become desirable on the screen and audiences want to be just like them. Jewish Communists came to this country to establish the motion picture industry. There was a purpose to the McCarthy hearings. The Senator was trying to root out the Communists who would make their propaganda interesting in order to sway theater audiences. He was right as became obvious in the years following.

There was the Hayes Code at one time that kept an eye on movies. Even married couples slept in twin beds. They stated that "no scene should be shot that would stimulate the lower emotions (that means sexual instruments doncha know)."

Like driving out McCarthyism, morals were driven out of the movies with churches and Christianity degraded. The movies have since promoted all types of sexual conduct, adultery, vulgarity and kinky lifestyles along with political doctrine.

THIS is what the Communist producers had in mind all along. A moral society is a STRONG society while a society without morals is a weak society and prone to be overcome by the forces of evil that are determined to put the U.S. under a strict dictatorship. They need a weak society to succeed.

To show the influence of films, notice how in the old days all glamorous movie stars were seen in their films smoking cigarettes and in newspaper photos. They made smoking look chic. The trillion dollar tobacco industry greatly profited by using the movies to promote a product that later proved to be deadly and the leading cause of cancer.

A relative in Switzerland was asked about a photo on display showing her with a cigarette in her hand. "Oh" she said, "I don't smoke, but I wanted to look sophisticated in the photo like in the movies." So there it is dear readers. The movies are there to manipulate us into compliance with the New World Order which can only come about if they make us weak...and we are dumb enough to buy into it.

Movies and now television are more into the shaping of the political scene than any other mission. Madam Secretary and Designated Survivor have each stated to The Hollywood Reporter that they are going to devote episodes to cutting down President Donald Trump. Those 'favorites' will be cut from my viewing list.

Here's a statement in a recent, Holywood Reporter: Few disagree that these programs reflect current events, but more intriguing is how they may influence the real world. Says television critic Myles McNutt, "It seems likely, in the years to come, that we will begin to categorize shows as either complicit or resistant to Trump's presidency."

Now the Big Question: Should Our Tax Money Fund PBS??

It is bad enough that we are so dumb that we actually pay to be manipulated and indoctrinated to all things vulgar in preparation for the New World Order, but in one case, the government TAKES our (tax) money without our consent to finance Public Broadcasting Service, (PBS) and NPR (National Public Radio) which are leftist communication organizations.

PBS, for instance, at this moment is running a series evolving to lesson plans which encourages students to identify with radical jihadists, which is now...sit down...being taught in our public schools. This writer broke the original story when Islam became a required subject for public schools beginning right after 9/11. The current course encourages students to empathize with young Palestinian terrorists who become suicide bombers to achieve martyrdom and would rather die since Palestinians have less land and are restricted.

This PBS Learning Media production, "Dying to be a Martyr," utilizes videos titled, "Martyrdom," "Suicide Bombing," and "Israel and Palestine" as well as providing internet sites and primary sources "to examine the roots of the Middle East Conflict." Students studying these videos in the public schools are asked to be able to understand "why individuals and groups sometimes turn to tactics of terrorism."

This is not fact finding, it is recruitment and indoctrination. And we unwillingly pay for it. Federal subsidies for PBS cost us, the taxpayers, more than $350 Million per year. In 1992, the Sesame Street program pulled in over $100 million every year for licensing Big Bird dolls and other merchandise. The chief executive officer was paid $647,000 a year in salary and benefits. Contributors to one station, WETA in Washington, D.C. sent in $627,000. One in eight of the contributors was a millionaire.

The New York City PBS station, WNET in 1990 paid its executive producer $400,000 in salary and benefits. The taxpayers forked over $30 million in 1989 alone. So why should we be required to pay for it? They can raise their funding themselves which is proven by their telethons.

The dumbest thing we can do is to purchase a movie ticket which finances the Communist agenda which will make all our lives miserable and promotes all immorality with explicit sex scenes. Audiences have become addicted to seeing blood and guts, car crashes, buildings blowing up, ear splitting sound effects and explicit sex scenes. Great stuff to mold your minds.

Instead of paying out your money to see this trash, watch some of the old movies on Turner Movie Classics instead or carefully check what a movie is about before forking over your money to see it. Time would be better spent playing with your kids in the back yard, family get-togethers, going to the park, a sightseeing drive and visiting friends.

As for PBS, we are not suggesting that it should be shut down since they do provide some informative and enjoyable documentaries including travel programs such as those of Rick Steves that are excellent, as well as performance arts including concerts, plays, Shakespeare and operas. PBS is basically worthwhile but we should not be forced to pay for it with our tax money since there are many programs that are not compatible with a huge section of the population. As can be seen by the figures above, they are able to totally finance themselves. We should not be forced to pay any part of it.

As for movies, patrons DO have a choice. And yes, it is dumb...downright stupid to pay to be indoctrinated into lifestyles and politics that are not good for a free society as well as being insulted. We are better than that.

Our thanks to Ralph Reed whose book, Politically Incorrect, provided the PBS financial stats.