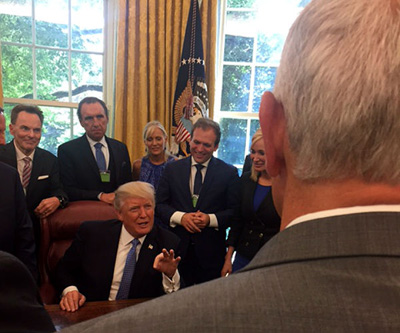 It was a spontaneous event with historical significance. According to Faith Leader Johnnie Moore, a group of ministers were in the White house for an all-day meeting on policy that did not involve the leader of the free world. President Trump learned that they were there and insisted that they come to the Oval Office to say "hi."

President Trump, who has an excellent relationship with faith leaders was more than willing when they offered to lay hands on him and pray for his success and safety as well as thanking God for placing him in the most powerful office in the world by overpowering a totally rigged election. That election was so rigged that the world was shocked when the results came in.

California Governor Moonbeam (Jerry Brown) made a rule that all illegals in the state could vote since voting is taking a valid part in a country you wish to be a part of. And vote they did. Over 2-3 million illegals cast their votes for Hillary. A knuckle-headed Virginia governor ordered a bill that would allow, now listen to this, all convicted felons to vote (for Hillary).That resulted in over 40,000 additional votes for the Hill on the Hill.

(A convicted felon loses his right to vote.) Voting machines, manufactured by George Soros flipped votes from Trump to Hillary...this has been documented. We've done our homework.

Of course the George Soros owned news media pulled every possible slam technique to make every single line with Trump in the story negative. With this latest nonsense one can see that the Soros Democrats can even turn praying for someone into a negative.

Clergy praying for the President of The United States was a part of America from her founding. They wanted a country of morals, integrity, character, honesty, and a belief and love of God, They wanted our lives to be patterned on the principles of The Bible. The founders, many of them clergymen understood fully that a country based upon the above noted principles would be a strong country, even in the face of enemies who may try to do us harm. And no country could defeat us until we began mocking God, celebrating perversion and riotous living while working to get the Bible out of sight.

It became illegal to have Bibles and prayer in schools. The term, Christmas, was banned and Christmas programs became, 'Winter Celebrations.' The following year following the banning of the Bible and Prayer, the crime rate increased over 300%.That percentage has continued to climb ever since.

As the result, our country became a land of chaos. Child rape is not only a common occurrence but indeed an expected one. RECENTLY three immigrant Muslim kids who had been brought into America and put up in an apartment, viciously and violently raped a little five year old girl in Twin Falls, Idaho. Not content with that these Muslim savages also urinated in the little child's mouth.

We have just learned the outcome of that outrage. Those punks did not get one day in prison or even at a juvenile facility. They were simply let go with no punishment. Even more outrageous, the Obama appointed State Attorney General made a public statement that anyone who makes a negative statement about the Muslim refugees will be charged and punished.

This is a result of pushing God, the Bible, morality and Christianity out of our lives. There was a time when people showed respect for each other, were polite, honest and did not parade their sins publicly for the world to see. Talk about thumbing ones' nose at God. That will not continue without severe consequences.

So at last, during the worst time of our history, we saw clergy laying their hands in prayer over our new President. Some photos were taken by Johnnie Moore, a former vice president of Jerry Falwell's Liberty University, one used in this story, and a couple others were released on Twitter. This group inlcuded Vice President Mike Pence and top Presidential Adviser Jared Kushner . Moore is the author of: "Defying ISIS: Preserving Christianity in the Place of its Birth and in Your Own Backyard."

Interesting, it is OK to defile the White House with rainbow colors celebrating the sin of homosexuality covering the People's House, and to bring in anarchists and criminals, but bring in God and all hell comes alive. Here are some of the reactions from the Communist Democrat-progressives regarding praying in The White House:

CNN (Communist News Network) jumped into action immediately when that tweet got out about the prayers in the White House, by tying to convince their sucker-audiences that this proves the allegations of collusion between the Trump Campaign and the Russian government, which authorities believe (no "authorities" listed") conducted a cyberwar and hacking campaign in a bid to disrupt the November election.

How's that again? What does one have to do with the other? This is nuts! So praying for someone proves that Trump colluded with Russia to swing our election over to Hillary? Now we've heard it all. What's more, other idiotic comments state that this entire prayer business in the White House is a cover up for "Russian Collusion," and "this has all knocked the entire White House off Balance," preached The Washington Post and The New York Times--All the fake news that's not fit to print. We suppose this statement would prove that prayer is powerful

It gets even nuttier. When the twitter photo went out, the Dems went into a hissy fit sending vulgar curse words to Johnnie Moore who said these were the vilest messages he had ever received. And this was all over him praying with the president.

The image of prayer in the White House immediately sparked an angry backlash, including allegations that Moore is somehow racist for having a better relationship with Trump than with his predecessor. We knew racism had to get in here somehow.

The Democrats, who are experts at twisting every event in our society, are conniving, cunning schemers who are so uneducated that they have no idea how this New One World Government that they are pushing so hard to achieve will affect their own lives.

They are so misled and uninformed that they would probably try to get rich selling Songs without Words. Wait! Isn't that basically what they are doing now?

What we saw at the White House this past Tuesday was totally correct, proper, and encouraging. I'm sure those pastors who prayed with the President also gave thanks to God for performing the miracle that put him in office, yes, I too believe, with the deck stacked the way it was for the most wicked candidate in history, almost fool proof, that prayers were answered as millions upon millions of people were up early every morning playing an Abrahamic prayer asking God's intervention.

And against all odds, God stepped in and answered those prayers, the prayers that astonished the world. Russia had nothing to do with Trump's victory. It was The Hand of God that stepped in and propelled millions of voters to head to the polls.

Moore said evangelicals "have a wide open door like never before into this administration," and suggested progressives will have to make peace with the fact that the president of the United States openly prays with leading evangelicals. This is good news for millions of people, with the exception of the Democrat Communists, Satanists, LGBT, Progressives and deviants.

"This wasn't the first time, it won't be the last time," Moore said. "And the principle promise that evangelicals have made to the president, the vice president, and the administration is that millions of us will be praying for him every day."

All of us have a profound duty to pray for our president, to get back to church-if you hear a distortion of The Holy Scriptures or any of that New Age crap at any time, RUN, don't walk to the nearest exit, then go find a church that preaches the uncompromised Gospel of Jesus Christ. Then join a Bible study group. Base your life on the principles of the Bible.

We now have a president who will stand with the Christians and the ministers. We have been miraculously given a second chance. Let's not blow it. Let only God be the authority of your life

Our thanks to journalist David A. Patten for writing the original story for NewsMax, one of the very few places where you can read the REAL news.