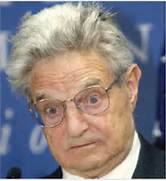 Erasing history is the goal of George Soros. A country that does not know its history has lost part of its soul, which weakens it. Censoring speech, banning books along with current commentaries including some on Social Media, as well as hiding all reminders of the strength of the U.S. are all essential weapons to push America into Soros' New World Order. Reminders of America's strength are shown by statues, photos, and written records, which are all presently under attack.

Statues of historic leaders that have stood for over a hundred years are at this moment being pulled down and pulverized. Kelleigh Nelson, founder of the news-site: Exposing Modern Mugwumps, used this phrase, "Monumental Stupidity" when reflecting on the madness of bulldozing statues of leaders: "Excellent description.

Even simply being white is now under attack. Stanford University has just introduced a new course, Abolishing Whiteness, which is built upon the systematic privileges afforded to whites in Western Society. How's that again? Yes this is STANFORD University where students pay a small fortune to gain their wisdom. And this is an example!

Below is a quote I just found while browsing some books. It is incredible how accurately it explains life and our future. Read this carefully:

"Every record has been destroyed or falsified, every book rewritten, every picture has been repainted, every statue and street building has been renamed, every date has been altered. And the process is continuing day by day and minute by minute. History has stopped. Nothing exists, except an endless present in which the Party is always right."

This book was published on June 8, 1949, 60 years ago. Orwell was dying in a tuberculosis sanitarium when he wrote it. At that time, three men were figuring out how to divide the world, Churchill, Stalin and Roosevelt.

The original ideology behind this impulse may be communist or fascist, or nationalist or corporate or institutional, but the methods by which it proceeds are in each case the same: the stamping out of the capacity for individual thought and freedom, not merely by physical force but by a complete denial of privacy and by the control of all information, even to the extent of policing the language in which thoughts are expressed. Yes, this is Stalinistic.

The world Communist leader, George Soros has funded a 49 page secret war manual for destroying the Trump Administration and regaining Democrat-COMMUNIST control of Congress. This in itself lays the groundwork for Treason and Sedition charges to be filed against Soros. DO IT!

Bishop E.W. Jackson in an article wrote: "President Trump is being attacked by a hostile liberal media, undermined by a Deep State full of Obama/Clinton holdovers and betrayed by some GOP "Never-Trumpers" who will never accept him as president.

Matt Staver of Liberty Counsel wrote in his newsletter: "The battle lines are drawn, and the future of the country is at stake. David Brock of Media Matters, a George Soros-funded leftist "think tank," has issued a 49-page secret war manual for destroying the Trump Administration and regaining Democratic control of Congress."

It calls for impeachment of the President, a de facto coup d'état. Ultimately, this is not merely an attack on Donald J. Trump. It is an assault on the presidency, the Constitution and the people who voted for change. Fair-minded people, whether they be Democrats or Republicans, are shocked by the complicity of the mainstream media in trying to overthrow the President.

It's time for Americans to be heard again in congressional offices, town hall meetings, rallies and on Facebook, Twitter, and other social media. The message is simple. To the President: We stand with you. Demand that George Soros be charged and prosecuted for Treason and Sedition. All the elements are there for that case.

Notice how George Soros deceptively names his non-profit 501(c)3 hit teams to suggest they are patriotic: For example one particularly active one is Democracy Alliance which was formed specifically to undermine the Trump agenda as well as America itself.

A full-on trench warfare against Trump from Day One.

Immediately after the election of Donald Trump, Soros and his wealthy cronies in the Democracy Alliance (DA) vowed to relentlessly fight the President and his agenda.

According to Politico, Soros and other liberal leaders – including Nancy Pelosi, Elizabeth Pocahontas Warren, and Keith Ellison – a Muslim, met to "plan trench warfare against Trump from Day One." They want to make all the decisions regarding our lives.

Plus ... as reported on the Democracy Alliance website, President Gara LaMarche mercilessly derided the President's agenda at a recent summit:

"We now have a President, with the most extreme anti-government Cabinet in generations, determined to advance this agenda at the federal level and undermine democratic norms from freedom of the press to the independence of the judiciary.

These assaults on democratic processes and systems hurt working families, endanger our environment and public health, erode faith and trust in government, delegitimize democratic institutions, and undermine the capacity of government at all levels to deliver basic services. We have much to resist."

That far-left rhetoric is echoed by the mainstream media. As a result, President Trump faces and confronts these distortions daily as he attempts to fulfill his "Make America Great Again" promises.

We must join the President and stand against leftist ideologies, like those espoused by George Soros' leftist groups!

The new Civil War has started. With the riots, destruction and chaos on the streets, is Martial Law far behind? How about Citizen Militias? One thing for sure, it is way past time to arrest and charge George Soros with Treason and Sedition.

Meanwhile, be of good cheer. Hillary Clinton announced that she is going to be a Methodist Pastor. This may cause pulpit palpitations since 'ye shall NOT know the truth and the lie will not set ye free but it will be a high profile church and should attract quite a crowd.