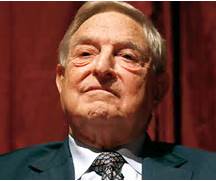 WASHINGTON 9/1/17 – FINALLY! A petition to stop George Soros has been crafted and put up on the White House website. It already has 67,952 signatures in the short time this has been up. Soros, who was born in Hungary, is also a resident and citizen of New York, owning two elaborate homes there, one in Katonah, New York and the other in Southampton, Long Island. I did a column on how and why Soros CAN be arrested and charged with Treason and Sedition. Here is that link: http://www.renewamerica.com/columns/miles/161114

His business office is in New York City located at 250 W. 55th street as well as an apartment in Manhattan. He CAN be prosecuted for Treason and Sedition since he is trying to overthrow the President of the United States and undermine the U.S. Government.

The petition has been filed with the U.S. Government which can be pulled up at this link: https://petitions.whitehouse.gov/petition/declare-george-soros-terrorist-and-seize-all-his-related-organizations-assets-under-rico-and-ndaa-law

"Whereas George Soros has willfully and on an ongoing basis attempted to destabilize and otherwise commit acts of sedition against the United States and its citizens, has created and funded dozens (and probably hundreds) of discrete organizations whose sole purpose is to apply Alinsky model terrorist tactics to facilitate the collapse of the systems and Constitutional government of the United State, and has developed unhealthy and undue influence over the entire Democrat Party and a large portion of the US Federal government, the DOJ should immediately declare George Soros and all of his organizations and staff members to be domestic terrorists, and have all of his personal an organizational wealth and assets seized under Civil Asset Forfeiture law."

There is a spot on the petition link above to sign you name. Every reader should sign this.

George Soros is the one man responsible for all the chaos, confusion, violence, destruction, and obstruction of justice, not only in the U.S., but indeed the entire world. He has manipulated currency in various countries including our own to devalue the monetary system. The 'depressions' we went through were not coincidental. Our economy was manipulated into depression by Soros.

It is he and he alone who agitated the blacks into a race war that would never have happened otherwise. He totally funded the Black Lives Matter violent protests. He has almost 200 non-profit political organizations for the sole purpose of destroying our government and the political system itself so this nation can morph into a Communist nation and be a part of the New World Order where Soros will become the universal potentate.

The Communist Party in America is not as big as we have been led to believe. That was proved in the past election. Donald Trump was voted in by real citizens, millions upon millions of them, mainly Christians, who had been relegated to the shadows, but in mass, charged to the polls and cast their votes, sweeping Trump into the Oval Office.

Communists are good at misrepresenting numbers. Those who lived in the Soviet Union felt that every other person was an active Communist who might turn them in or arrest them. The truth is, only about 2 % of the Soviet Union was Communists but they managed to bully the citizens into compliance. Nobody dared to ask any questions of anyone since nobody really knew who was who. It was all fear based.

Soros is one of the richest men in the world. His personal bank account holds 29 Billion dollars. The interest alone on that amount of money would be a fortune to anyone. Indeed, one could not spend the interest on that money during a lifetime.

Soros owns most of the politicians in D.C. His money put many of them in office. So that will be an obstacle to seeing these charges carried out. I was amazed at the number of Congresspersons and Senators, including John McCain who is owned by Soros. You can see how they all, on both sides, are viciously fighting to block everything President Trump tries to do.

Soros owns and controls most of the news media. It should be obvious when you read the headlines. For example, everything President Trump does, wherever he speaks, there is an immediate story the next day proclaiming; "Trumps Approval Rating Dips to New Low following his speech at ........" First of all, how can they get a poll that quickly? They cannot. I am sick and tired of this residue of a bull following everything President Trump does or says.

Everyone KNOWS how the Soros newspapers and newscasts stated constantly during the campaigns that Hillary's poll numbers outpaced Trumps'. That was a lie. All of those poll numbers were fake to discourage voters from making the effort to vote for Trump. It didn't work. Since Soros owns the newspapers, newscasts and journalists, they will print or broadcast everything Soros tells them to.

The voters, who showed up without fanfare spectacularly dumbfounded George Soros, the Democrats and Communists all over the world. They were dazzled in confusion. If the people in the old Soviet Union would have realized that there were much more of them than the Communists, who had kept them in fear since it was believed there were many more of them.

It is the same today. We totally outnumber the enemy. Let's really make an impression on them by signing the petition to charge George Soros. I urge every reader to click on the link to the petition and sign your name.

Every free American should take part in this. It is OUR battle for the very soul of our country.