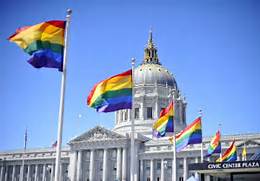 Brown completed his second term having appointed a total of five gay judges, including Rand Schrader and Jerold Krieger. Through his first term as governor, Brown had not appointed any openly gay people to any position, but he cited the failed 1978 Briggs Initiative, which sought to ban homosexuals from working in California's public schools,and to show his increased support of gay rights,the Governor also signed AB 489, The Consenting Adult Sex Act, which decriminalized homosexual behavior between adults, adding to his reputation. He also signed AB 607, which banned homosexuals from receiving civil marriage licenses, in 1977. He is a thicket of contradictions.

Our thanks to journalist Jesse McKinley for providing these facts:

SAN FRANCISCO – On a Tuesday, when Jerry Brown – California's once and would-be-future leader – declared he was running to win back his old job, he brought with him more than questions about his age (71) and his record of political service (40 years and counting. He brought Moonbeam with him, too.

For the uninitiated, 'Governor Moonbeam' became Mr. Brown's intractable sobriquet, dating back to his days as governor between 1975 and 1983, when his state led the nation in pretty much everything – its economy, environmental awareness and, yes, class-A eccentrics.

The nickname was coined by Mike Royko, the famed Chicago columnist, who in 1976 said that Mr. Brown appeared to be attracting "the moonbeam vote," which in Chicago political parlance meant the young, idealistic and nontraditional.

The term had a nice California feel, and Mr. Royko eventually began applying it when he wrote about the Golden State's young, idealistic and nontraditional chief executive. He found endless amusement – and sometimes outright agitation – in California's oddities, calling the state "the world's largest outdoor mental asylum."

"If it babbles and its eyeballs are glazed," Royko noted in April 1979, "it probably comes from California."