December 22, 2017
Where are the Einstein's of today is a lament we hear often, or an Alexander Graham Bell or a Thomas Edison? No such individuals are visible today...at least that is the thinking of most. Anyone looking for such geniuses would of course be seeking a man who might fit the bill.

But how about a woman?? Yes, a woman! Why not a woman? 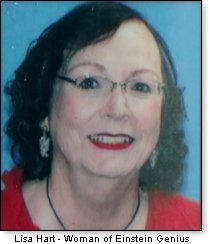 We have discovered just such a genius woman, a skilled engineer who designed and built a power monitor for the space shuttles' computer power supply. This became part of the shuttles' test platform. It automatically detected the sleep mode from the operating mode and adjusted the overload point accordingly, it was also self-testing which was a big plus to NASA.

After that Ms. Hart worked for a company as a contractor developing test system hardware and software for testing the radiation detectors used by the NASA deep space probe. She was then recruited by the Army Corps of Engineers. They sent her to Washington, D.C. to work on one of their projects, which was a vital machine that nobody....NOBODY...could fix. Liza COULD and DID. Within six months the machine was up and running. She designed a completely new control system and built it.

At the time, the company [that] the Army Corps of Engineers sent her to, said the machine was looking at variable densities for detection of Contraband. Liza, the female Einstein of our time, figured that machine might also work for explosives detection.

Her new idea combined spectroscopy, broad spectrum and x-rays, which was an entirely new idea. The company who had the machine brought in the bomb squad who tested it with live explosives. It worked.

There had also been a problem with the X-ray tubes that could not handle the high voltage (160.000 volts) which caused some of the tubes to blow up. Yet that high voltage was needed to produce the X-rays needed. A catch 22 if there ever was one. Instead of throwing up her hands, Ms. Hart simply shifted her genius brain in gear and went at it.

She came up with a new X-ray Tube Assembly Design. This resulted in a patent and that design is still used to this day and machines that came from that are in place at international airports.

This is only A SMALL PART of the various inventions created by Liza Hart who holds patents on them, many which have saved lives including medical devices while working with a heart doctor. Her inventions have been so significant to the world that she is now a part of history.

This columnist first met Liza Hart at the PTL (Praise the Lord) television studios in Charlotte, North Carolina over 30 years ago. Ms. Hart was an engineer for the TV program who was able to immediately fix any problems that arose regarding transmission, sound, camera dysfunctions, or any other gremlin that could possibly interfere with the smooth transmission of the program to the world.

Here is GREAT news for farmers, landscapers, gardeners and those who use a tractor lawn mower. This brilliant brainy woman has just created an invention just for you. Yes and it could indeed save your life.

Tractors, motorized lawn mowers can tip over, and many deaths have taken place during that tip over. Indeed, in one year alone, there were 34,000 rollovers and 401 people were killed as their vehicle turned while going up a slope and flipped over.

Ms. Hart designed a rollover/tip-over alarm that warns the driver that the laws of gravity are about to prove their effectiveness. However, before it gets to that point, the alarm goes off and the motor shuts off. And this is accomplished by a small device that is attached to the tractor or mower called a Tip Over Alarm. and it is not that expensive. This is to save lives and injuries,plus humiliation if your neighbors witness it.

Ms. Hart has just formed a company called, TipOver Solutions. Here is the website for all information: http://www.TipOver.solutions. (Don't forget that dot after "Over"). This column does books, concert and film reviews and is reviewing a product for the first time, one that will prevent injuries and even death amongst people I especially love, since I am still a farm boy at heart.

You can also call Ms. Hart for further information. Her number is: 423-579-2786. This number is ONLY for business inquiries, not marriage proposals. Hear?

Readers can get further info and put in an order for the life-saving device which will be shipped out after the holidays, meaning January or February. Save this article.

A further note on this remarkable woman. She is highly respected by all the pastors in her area and is a certified prison chaplain, holding Bible classes for inmates. She has a tremendous positive effect on everyone she meets and deals with. We need more like her.