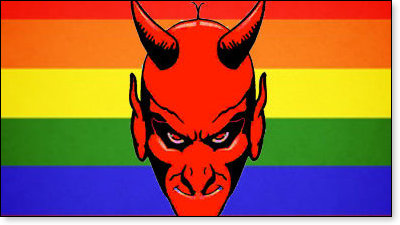 This is a column I never expected to write. But how could it really NOT be expected as the stage was being carefully set to sodomize the world. Little by little this LGBTQ band of perverts began to become more and more visible. And the public just sat and watched. The churches were silent. Not a peep from the pulpits.

Then the Pride Parades emerged, where, with police protection, they sashayed down the main streets of the various towns and cities with elaborate floats with the participants in bizarre costumes and makeup, with some of the participants chanting...."We are queer and we are here."

Who are they to welcome incoming students? They had no official position there. But they are driven by assumption that was never stopped or even challenged.

She made several references to her sexual orientation, saying things like, "I don't want you to see me as just another queer writer."

I asked the psychology professor, whom I was sitting with, if she kept referring to herself as a "queer writer," attempting to convince the audience, or...herself that it was OK to be what she was proclaiming.

The Psyche professor agreed with me that this was exactly what was going on. This showed she was not that secure in her lifestyle choice.

Next, transgenders in full regalia were allowed to read stories to children in libraries. I guarantee you that nobody would be allowed to have a spot in a public library to read Bible stories. I know because I petitioned to do so but was refused.

That same week, the NAMBLA, (North American Man Boy Love Association) that is working to make pedophilia – sex with children LEGAL- was given a 'community room' to have their demented meeting. Yes that was perfectly OK for our government but never to talk about the Bible.

The sodomites had the audacity to go to Zondervan book publishers and demand there be changes in the Bible that would delete all references to homosexuality. I kid you not.

They began to interrupt church services. At St. Patrick's Cathedral in New York City they crashed a mass taking place, throwing condoms to the congregation. And who can forget the scene in San Francisco when these deviants, dressed in their gaudy clothing and make-up came in and demanded to be served Communion. This is blasphemy.

And by the way, it is a felony to interrupt a religious service. Preachers, remember this and file charges if this happens in your church.

It has reached a point that if anyone does not agree to participate in sin, such as churches allowing same sex 'marriages' to take place in their sanctuaries or providing services like baking a cake with an LGBT message, those who refuse to follow their orders and join in the "celebration," can be ruined by the government.

Even knowing the fatal risk of sodomy they are still so consumed by perverted lust that they simply can no longer control themselves. They are enslaved.

Governor Moonbeam of California recently announced that he would require regular LGBT classes of study in the public school system, even though he, nor anyone else, will allow parents to see what is actually being taught. Hiding something like this proves malfeasance.

Now the closets are empty as all the perverts have come out. The latest is: Colleges offering courses on....now sit down...Queering the children, The Bible, and, the most shocking of all....the queering of...God! They are all guilty of blasphemy and will all go to hell for it.

Sixteen colleges have now signed on with these lug-headed bastards. Don't get your knickers in a twist over this word which is in The Bible meaning questionable birth details. It is accurate as these people are in Satan's family, not God's family.

According to the college,, the course "explores secular philosophies of queer and post-colonial theory as well as their critical and constructive application to religion," focusing on topics like "the sexual ethics and ritualization found in the S&M community, transgender Christs, and the mestiza (or mixed) cultures of Latin America."

Harvard University – yes HARVARD – Divinity School offers a course on "Queer theologies, Queer Religions" this fall, and how it relates to "larger aspirations of queer religion or spirituality in America."

The course information of Harvard states: "Students will begin by sampling the efforts to revise traditional Christian theologies in order to accept or affirm same-sex loves." There it is in their own words.

And there are many more outrageous statements coming from this bastion of higher education.

The most outrageous of all comes from Swarthmore College with courses named; "Queering the bible, and Queering God.' What???

Gwynn Kessler, the Swarthmore religion professor teaching the course had this to say:

"By reading the Bible with the methods of queer and trans theoretical approaches, this class destabilizes long held assumptions about what the Bible-and religion says about gender and sexuality."

The University of Pennsylvania's "Gender, Sexuality, and Religion" course will read religion through a variety of feminist and queer theory lenses.

University of San Francisco has the course,"Christian Feminist

of central Christian insights about God.

The City by the Bay adds, "We will also look at the central significance of gender to the field of religious studies generally, with particular attention to non-binary genders."

The real kicker is the statement that God is neither male or female. This is the basis for Queering God as they proudly proclaim.

And this is the new, modernized church coming your way? Or is it already here?

Pastors, this cannot be allowed to happen. Too many have simply stood aside and watched as this blasphemy and war against God has multiplied, increasing so much that it is now at a point of no return unless stern measures are taken.

This article has been written to fulfill a commission given to all ministers when they are ordained. The commission to be a defender of the faith.

See this story I wrote a couple of years ago about a boy named Trevor, a wonderful kid who after going to a public high school and college denounced God, turned on me the best friend he ever had, and became part of the LGBT crowd. This can happen to any and all of your children you surrender to government schools. Here is the link: http://www.renewamerica.com/columns/miles/160607

Pride Parades must be stopped, introducing sick sexual practices in public schools must be stopped, that is NOT why children are sent to school. This has been Satan's greatest victory. It is now up to the pastors to preach the Word and MAN YOUR PULPITS.

WHAT WE CAN DO: First of all, saturate your lives with God. There are plenty of good Bible-believing churches everywhere. Without God in your active lives, you can be yanked in any direction evil people pull.

Meet with your pastors to encourage them to start a Christian School. It is not difficult to do. And help support that effort by volunteer work. It is the life of your children at stake.

Be alert and ready to defend your family.