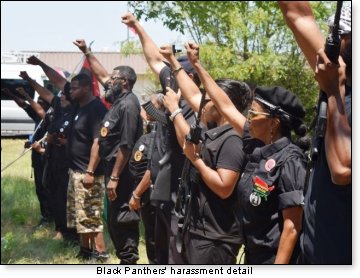 This columnist believes that the 'race wars,' did not naturally happen. The black race was agitated, probably by George Soros, who was reaching for any method that would weaken The United States of America. This manufactured dissension caused more and more demands by blacks to white citizens. It has reached the point that the big question now is: Will anything satisfy the black race?

This will help answer that question:

We want full employment for our people and we demand the dignity to do for ourselves what we have begged the white man to do for us.We believe that since the white man has kept us deaf, dumb and blind, and used every "dirty trick" in the book to stand in the way of our freedom and independence, that we should be gainfully employed until such time we can employ and provide for ourselves.

We want tax exemption and an end to robbery of THE BLACK NATION by the CAPITALIST.

We want an end to the capitalistic domination of Africa in all of its forms: imperialism, criminal settler colonialism, neo-colonialism, racism, sexism, Zionism, Apartheid and artificial borders.We believe that this wicked racist government has robbed us, and now we are demanding the overdue debt of reparations.

A form of reparations was promised 100 years ago (forty acres and a mule) as restitution for the continued genocide of our people and to in meaningful measure and repair the damage for the AFRICAN HOLOCAUST (Maangamizo/Maafa).

We believe our people should be exempt from ALL TAXATION as long as we are deprived of equal justice under the laws of the land and the overdue reparations debt remains unpaid. We will accept payment in fertile and mine rally rich land, precious metals, industry, commerce and currency. As genocide crimes continue, people's tribunals must be set up to prosecute and to execute.

All have taken part in the AFRICAN OFFICIAL NBPP BLACK POWER MANUAL HOLOCAUST and the slaughter of 600 million of our people over the past 6,000 years in general and 400 year in particular. We know that this is a reasonable and just demand that we make at this time in history.

We want decent housing, fit for shelter of human beings, free health-care (preventive and maintenance). We want an end to the trafficking of drugs and to the biological and chemical warfare targeted at our people.

We believe since the white landlords will not give decent housing and quality health care to our Black Community, the housing, the land, the social, political and economic institutions should be made into independent UUAMAA "New African Communal/Cooperatives" so that our community, with government reparations and aid (until we can do for ourselves) can build and make drug free, decent housing with health facilities for our people.

We want education for our people that exposes the true nature of this devilish and decadent American society. We want education that teaches us our true history/herstory and our role in the present day society. We believe in an educational system that will give our people "a knowledge of self." If we do not have knowledge of self and of our position in society and the world, then we have little chance to properly relate to anything else.

We want all Black Men and Black Women to be exempt from military service.

We believe that Black People should not be forced to fight in the military service to defend a racist government that holds us captive and does not protect us. We will not fight and kill other people of color in the world who, like Black People, are being victimized by the white racist government of America. We will protect ourselves from the force and violence of the racist police and the racist military, "by any means necessary."

We want an immediate end to POLICE HARRASSMENT, BRUTALITY and MURDER of Black People. We want an end to Black-on-Black violence, "snitching," cooperation and collaboration with the oppressor.

We believe we can end police brutality in our community by organizing Black self- defense groups (Black People's Militias/Black Liberation Armies) that are dedicated to defending our Black Community from racist, fascist, police/military oppression and brutality. The Second Amendment of white America's Constitution gives a right to bear arms. We therefore believe that all Black People should unite and form and "African United Front" and arm ourselves for self-defense.

We believe that all Black People and people of color should be released from the many jails and prisons because they have not received a fair and impartial trial. 'Released' means 'released' to the lawful authorities of the Black Nation.

We want all Black People when brought to trial to be tried in a court by a jury of their peer group or people from their Black Communities, as defined by white law of the Constitution of the United States.

We believe that the courts should follow their own law, if their nature will allow (as stated in their Constitution of the United States) so that Black People will receive fair trials. The 6th Amendment of the United States Constitution gives a man/woman a right to an impartial trial, which has been interpreted to be a "fair" trial by one's "peer" group. A "peer" is a person from a similar economic, social, religious, geographical, environmental, historical and racial background. To do this, the court will be forced to select a jury from the Black Community from which the Black defendant came. We have been and are being tried by all white juries that have no understanding of the "average reasoning person" of the Black Community.

WE DEMAND AN END TO THE RACIST DEATH PENALTY AS IT IS APPLIED TO BLACK AND OPPRESSED PEOPLE IN AMERICA. WE DEMAND FREEDOM FOR ALL POLITICAL PRISONERS OF THE BLACK RED AND BROWN NATION! We want land, bread, housing, education, clothing, justice and peace.

And, as our political objective, we want NATIONAL LIBERATION in a separate state or territory of our own, here or elsewhere, "a liberated zone" ("New Africa" or Africa), and a plebiscite to be held throughout the BLACK NATION in which only we will be allowed to participate for the purposes of determining our will and DIVINE destiny as a people.

FREE THE LAND! "UP YOU MIGHTY NATION! YOU CAN ACCOMPLISH WHAT YOU WILL!" BLACK POWER! History has proven that the white man is absolutely disagreeable to get along with in peace. No one has been able to get along with the white man. All the people of color have been subjected to the white man's wrath. We believe that his very nature will not allow for true sharing, fairness, equity and justice. Therefore, to the Red Man and Woman, to the Yellow and to the Brown, we say to you "THE SAME RABID DOG THAT BIT YOU, BIT US TOO!" ALL POWER TO THE PEOPLE!

The SOLE PURPOSE of a Black Panther

The SOLE PURPOSE of a Panther is to be a REVOLUTIONARY in the Black/Afrikan People's liberation struggle, and to mobilize the masses towards self determination. A Panther MUST be a vanguard example at ALL TIMES. In order to accomplish this great and divine mission...

* Respectful and courteous to all people and demand the same in return.

* Militant – Always engaged in war for the minds and hearts of black people, while carrying one's self in an organized and orderly fashion.

* Humble – Willing to release any arrogant attitudes or superior ideas of one's self.

* Disciplined – Willing to sacrifice your lower or personal desires for the greater good of the mission.

This is all it will take to have a civil discourse between the races.

***(Editor's note: This was published as written, including sentences in all caps. It is doubtful that this "constitution" was written without a lot of help by someone who is determined to create a race war in order to weaken America.