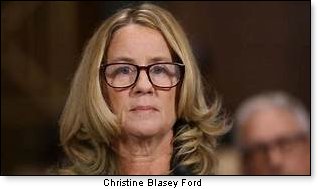 Who can forget Christine Blasey Ford, the dim-witted blonde with the mature face and little girl voice who blatantly accused Supreme Court Candidate Brett Kavanaugh of the unthinkable? It was an orchestrated effort to torpedo his appointment to the High Court. First of all, she is a Democrat who wants to sabotage anything Republican.

Question: So what was the motive behind her desperate attempt to keep Judge Kavanaugh off the Supreme Court?

Why was it so important to her?

"Corcept Therapeutics (Corcept.com) manufacturers and markets an abortion pill drug called mifepristone, and Christine Blasey Ford is a co-author of at least eight published scientific papers produced by the pharmaceutical giant to promote its pills. You can see Blasey's name listed on several publications at this Corcept.com web page detailing their research papers."

You ask why Dr. Christine Blasey-Ford would do this? Here are 4 reasons:

1) She owns a major portion of the company that makes the morning after abortion pill and she is afraid Kavanaugh will overturn Roe v Wade, therefore making her million dollar empire go caput.

2) She's a professor at the same college (Palo Alto U) where Diane Feinstein's husband, Richard Blum, is on the board of directors. She has worked with Blum on the "resist Trump" movement for two years.

4) Feinstein and Chuck Schumer appointed lawyers to set up three GoFundMe pages for her the week BEFORE she testified, which are currently up to over a million dollars for her to keep as payment for her testimony.

No doubt more info will be coming as this writer has a "Secret Source." Don't believe for one minute this "professor" came out of nowhere.

Now the real issue concerning Professor Ford. Not only has she hurt a very good man and his family, but in doing so she committed a serious sin in the eyes of God who commands us not to bear false witness against anyone. And she received over a million dollars to do so making it doubly offensive to God.

She may think now that she was clever but ahead she will face God and the horror of the "White Throne"Judgment just before the trapdoor opens and she is plunged into the pits of hell and remain there forever.

False witness causes loss of reputation, divorce, job loss, harassment, harm by others, destruction of families, tearing down of relationships, humiliation and in general puts the victim in what seems to be, hell – where she is now headed.

This is not preaching.....this is a reality. And that million bucks will do her no good there.

Direct appeal to Ms. Ford: Please spend some time alone and think. Think about God, He is real. Talk to a pastor, let him tell you about Jesus. Accept Jesus as your Savior after confessing your sin and asking forgiveness for that sin. He will forgive you. Also confess your sin to the entire Kavanaugh family and ask their forgiveness. We can almost guarantee that they will forgive you.

You cannot keep that ill-gained million dollars. You must give that to the poor, like a homeless shelter or to homeless veterans' housing. THEN you can attain salvation, forgiveness, start all over, and you can be assured that as you do, a peace will cover your face, making you an attractive woman. Again, Please Ms. Ford.....T H I N K. And Christians, pray for her that she will come to Christ.

READERS, please redistribute this story widely so it will eventually come to her attention.