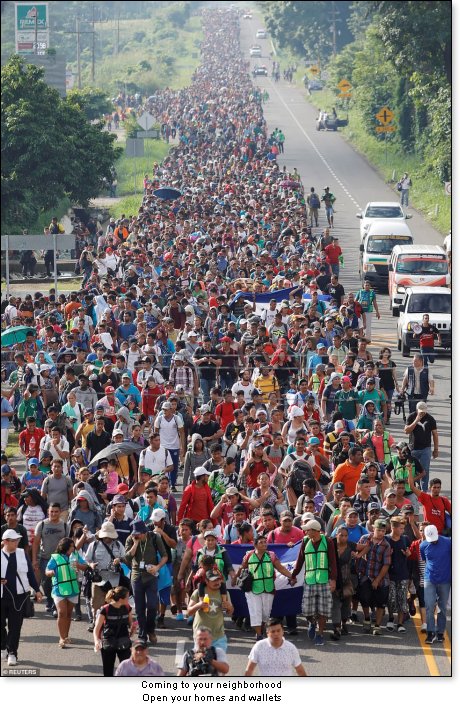 Birthright Citizenship means that whatever country a baby is born in, makes it a citizen of that country. This subject has been in the news constantly since the Caravans, including thousands of illegal immigrants, began pushing its way from lower Latin countries to the U.S.

Pregnant women, mostly unmarried, want to make it to this country before the baby is born so they can enjoy citizenship privileges, by the baby instantly becoming a citizen, which includes all the perks: Welfare, Food Stamps, Full Education. Housing along with other privileges including cell phones, are given to the parent(s) as well as the newborns.

This has become so outrageous, that several years ago a Social Worker told me that they now give out Broadway Theater tickets to those on welfare. What? The welfare people have their pick of theater they would like to see while the working stiffs who pay taxes cannot afford to go. This is nuts!

"Well," she said, "the welfare people should not be deprived of going to the theater just because they are poor with no money to buy tickets!" Well that makes sense doncha know.

Broadway tickets have always been much higher than any other performance event. Today those tickets START at $150.00 in the way up nose-bleed balcony, with prices going up on the main floor starting at $300.00 to $1000. We understand there are $1500 dollar seats.

Yep, welfare families who will not work can attend the luxury of theater, but those who work for a living are turned away since they cannot afford the tickets. Is it just me, or is there something twisted and wrong with this system?

So how many countries offer Birthright Citizenship to newborn babies of tourists and illegal aliens?

Only one! The United States of America!

NO OTHER COUNTRIES (ZERO-NONE-ZILCH) gives birth citizenship; The U.S. 'Stands alone.' There used to be all kinds of developed countries that gave away their citizenship as freely as we do in the U.S. But one by one they all have recognized the folly, recklessness, lunacy, stupidity of that policy.

SOME OF THE MODERN COUNTRIES THAT RECENTLY ENDED THEIR BIRTHRIGHT CITIZENSHIP POLICY: Canada was the last non-U.S. holdout. Illegal aliens stopped getting citizenship for their newborn babies in 2009.

Australia's birthright citizenship requirements are much more stringent than those of H.R. 1868 and took effect in 2007. The United States is the 'laughing stock' of the modern world. Only the U.S. Values its citizenship 'so lowly' as to distribute it promiscuously to the off-spring of foreign citizens visiting Disney World on tourist visas and to foreign citizens who have violated their

promises on their visitor, work and student visas, who stay illegally in the country, as well as to those who sneak across our borders.

It's not just Mexico and South America who are sending illegals across our borders. Currently, the CBP (Customs Border Protection) reports that of those apprehended illegally crossing the border, China is number one.

Wake up America! END BIRTHRIGHT FOR TOURIST, FOREIGN CITIZENS AND ESPECIALLY 'ILLEGAL IMMIGRANTS.' Illegal aliens from China, India, Russia, the Middle East, and a host of other nations are flooding the United States. Ironically, most often these 'illegals' and/or their offspring are given positions at the front of the line for Government jobs, contracts and assistance.

Look around you! We are giving away our culture, and economic and fiscal strength because our borders are not secure and we bestow citizenship irresponsibly.

George Soros and the Communist Party has stirred up this entire illegal mess in an effort to drain the strength of America, making it weaker while positioning it for Communist take-over which has been their goal all along. We must not let that happen.