December 23, 2018
MYRA – (Note To Readers: This story was first published on December 20, 2001. It has been picked up and re-published all over the world every year since, becoming a Holiday Tradition. Hallmark contacted the writer and asked him to appear in the Holiday movie, Single Santa Seeks Mrs. Claus, playing the Mall Santa that magically receives the gift of sign language. That movie is aired every year.) 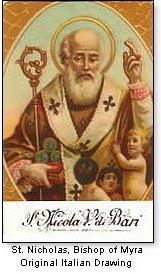 He is lovable, congenial, giving and jolly. What's more he knows everything, as any child will readily testify. He is a colorful old man, whose visits are eagerly awaited by millions of children each year and who, for a little while, makes the world a much happier place

Is Santa Claus a good influence on children, or a bad influence whose image merely commercializes Christmas and who takes the reason out of the season, as some charge?

Where did Santa come from? It will surprise many to learn that Santa Claus (as we know him today) came out of the church itself through the charity of a very devout and caring priest. Now bear in mind that this is a true, historically documented account.

Approximately 200 years after the birth of Christ, a meeting of the elders of a little church in Myra, Turkey had just been called to order. They needed to appoint a bishop but no fitting candidate could be found. So great was the need that they decided to pray.

Out at sea, a ship battled a raging storm. The crew valiantly fought to keep it afloat. Trunks were being thrown overboard to lighten the load as frightened passengers held onto whatever they could to keep from being swept overboard while others huddled in their cabins. The ravaging waves tore some wood from the sides of the ship.

"Nicholas...NICHOLAS!" someone yelled frantically. It had been noised about that a man named Nicholas, who was known to be a man of God, was on board. Out of a cabin, in response to the call, came a man with a long white beard. Holding on to the rail of the tossing ship, he began to pray for the storm to cease. As he prayed he lifted his hands heavenward. Miraculously, the storm calmed. The crippled ship drifted into the harbor of Myra.

The elders of the little church in Myra suddenly stopped in the midst of their intense prayer, opened their eyes and looked around at each other, startled at a message from God that had come to each of them in the form of a vision; they were to appoint as their bishop, the first man named Nicholas who would, within the hour, enter the church to pray.

As the leaning ship hobbled into the port and was docked, Nicholas disembarked and made his way into the village to seek a church. He wanted to give thanks to God for His intervention during the storm that could have killed everyone on board.

Finding the church, he eagerly approached it. The heads of the elders turned toward the door as it slowly opened. The stately man with the snow-white beard entered, and, focused on the altar, made his way down to the front and knelt in a prayer of thanksgiving. As he rose to leave the elders approached him. "What is your name?" asked one. "Nicholas." was the reply.

"God has sent you to us to be our new bishop," said another. The group joyfully fitted the surprised Nicholas with a long red priestly robe and miter. Nicholas quickly became known as, "The Bishop of Miracles," because of so many spectacular answers to his prayers.

Unlike most priests, Bishop Nicholas was wealthy through family inheritance. In his mind, wealth came from God and belonged to God. The very reason for his existence was to serve God. And that is how he lived his life.

Nicholas became increasingly concerned about a custom in Turkey. If little girls did not have a dowry so that they could marry, they would be sold into slavery, which included prostitution. Bishop Nicholas had given away most of his own fortune so he went about and managed to collect gold from admirers.

On December 6th, under cover of darkness, he wrapped the gold coins in several little bags and visited each home that had a daughter without a dowry, dropping a bag of gold through the windows of each, which landed on the hearth where the little girl's clothes would be drying. When the gold was discovered the next morning, the family rejoiced. Their little daughters were saved from slavery.

Nicholas continued what was to become an annual tradition. Nobody knew the identity of the mysterious benefactor who would slip around the village on that date each year. On one such night, as Nicholas put his arm through the window to drop the bag of gold, instead of it landing on the hearth, the bag fell into a stocking that was hanging in front of the fireplace to dry. It was found the next morning, to the delight of the family. Which, by the way, is how the custom of hanging up Christmas stockings came to be.

Shortly before Nicholas's death, which occurred on December 6th, the date of his annual visit, it was learned that he was the individual who brought so much joy to so many families.

Five hundred years later, in the 9th Century, Nicholas was canonized by the Roman Catholic Church, hence the name, Saint Nicholas. And since the celebration of Christmas came after the life of St. Nicholas, he actually preceded Christmas, as we know it today.

As the story of St. Nicholas spread, French nuns in the 12th Century began making annual night-time visits to poor families with children, leaving fruit and nuts, which these families could not afford.

The nuns made their gift-giving rounds on what became known as, "St. Nicholas Eve," December 5th. The tradition spread throughout the Old World and across the ocean to the New. Many people to this day celebrate Christmas on December 6th.

St. Nicholas became the Patron Saint of many countries including Russia, becoming a major ingredient in the Russian Christmas celebration. England made St. Nicholas, "Father Christmas." Germany picked up on that title, and in France he became known as "Papa Noel."

As the various forms of Nicholas began to emerge in the secular world over the years, some unanticipated problems arose: protests which came out of...the church! Martin Luther pounded his pulpit proclaiming that the true Christmas message was being lost by the Saint Nicholas connection.

The Dutch came to the rescue and adopted what they believed to be a more religious view of Nicholas that would satisfy the critics. The Dutch-German Protestant Reform Movement brought with it the idea that the Christ child should be the standard bearer for Christmas. The German word for Christ child, "Christkindl," evolved to, "Kris Kringle," yet another version and another irritant for Luther.

In 1822, on the night before Christmas, which the world began to celebrate on December 24th, Clement Moore wrote a poem about the gift-giver for his six children. That poem, "The Night Before Christmas," was published the following year in the Sentinel of Troy, New York. Up to that time, Nicholas had taken various forms. He was portrayed with a black beard, then a white beard. He was shown dressed in everything including buckskin.

Mr. Moore defined Nicholas once and for all and renamed him, Santa Claus. He had, no doubt, been influenced by the Dutch who named him, "Sinter (Saint) Klass (short for Nicholas) and that had become, "Sinterklass."

Others who spoke broken English, knowing that gold had been found on the hearth by the fireplace, started a new legend. The gift-giver came down the chimney and would land in the cinders of burning embers, so they called him, "Cinder Klaussen," which would in Moore's hands become, Santa Claus.

Clement Moore's poem made Santa famous. He even named the reindeer. Not only did he name them, he made them fly. He might have taken that idea from the poet, Washington Irving, who wrote a book in 1809 about a Dutch Colonist's dream in which St. Nick came riding over the tops of trees in a wagon wherein he brings yearly presents to the children.

An artist named Thomas Nast, who was a Harper's Weekly cartoonist, began to show what Santa looked like. He dressed him in red, which had been the official color of the priestly robes worn by St. Nicholas and went further by making Santa plump and jolly.

To show how much of a church connection to Santa there is, Clement Moore's father was the Episcopal Bishop of New York, and, Clement Moore himself was Professor of Theology at Union Theological Seminary.

In 1897, a little girl named, Virginia Hanlon, had been told that there really was no Santa Claus. She was so disturbed about it that she wrote a letter to the editor of The New York Sun, whose name, by the way, was Francis P. Church...can't get away from that connection. He responded with a story titled, "Yes Virginia, there really is a Santa Claus." And the world breathed a sigh of relief.

It is interesting to note that the clearest image of Santa came not from the church, or from a poet, but by, of all things, a soft drink company advertisement! That drawing, known as 'the Coca Cola Santa,' created and drawn by Haddon Sundblom, made him totally definable. And the elves? Well, they were first seen in Ireland as Leprechauns.

As for the commercialization of Christmas, there still is a bright side. It is the one time in the year where we can hear songs proclaiming the King of Kings and Lord of Lords, with others heralding the birth of The Holy Child, Jesus Christ our Savior coming through the loud speakers of the malls and shopping centers of the secular world (even though that is changing as the secular world is trying to strip all mention of Jesus Christ out of Christmas).

Homes are still decorated with lights to proclaim Him. And people are a little nicer to one another at least once a year. So maybe this commercialized version is better than having no celebration at all.

Extra Note: Since the first publication of this story, a Christmas war has been declared with the goal of making the word Christmas illegal. They are even trying to abolish Santa.

Check the link below regarding the Christmas wars with a brief personal message from Santa that will help put it all in perspective.

Rev. Austin Miles is the author of the new book, God and Animals-What The Bible says about Animals and Heaven.