Rev. Austin Miles
Crying over an obituary of a female I didn't know

November 15, 2019
It is never certain what my emails will bring in each day. With one to three thousand emails a day, there is bound to be something that this writer will react to.

Bella first became known personally by an organization called Wildlife SOS in India two weeks ago. They rescue animals who have been exploited, mistreated and were subject to unspeakable cruelties by the humans who had managed to take possession of them.

During her short time with Wildlife SOS, she managed to carve out a permanent place in the hearts of every staff member there. Bella was so loveable even though her body was battered for 60 years, that is 60 YEARS of neglect, cruelty and greed. All this so human beings could generate curiosity money so they did not have to work.

Lazy BASTARDS! Don't get your Depends in a twist since that is a BIBLICAL word, which means 'of unclear birth details.' There is both evil and good in this world. The evil, all orchestrated by Satan, has no regard for any living being. These so called people are described quire clearly in John 8:44 which begins, "Ye are of your father the devil, ( and it goes on to say; " and the lusts of your father ye will do. He was a murderer from the beginning, and abode not in the truth, because there is no truth in him. When he speaketh a lie, he speaketh of his own: for he is a liar: and the father of it."

We are the children of God, and evil doers are children of the devil. So there is a question of unclear birth details. And this is where the biblical word, Bastard comes into view. So don't scream and run with this column's use of the word.

When she was found Bella was emaciated and gaunt and her sunken temples revealed what she had been through. She was covered in lacerations, bed sores and infected ulcers.This revealed that Bella knew only captivity. She did not know freedom, she did not know home. Even though she had a capacity for love, she never experienced it. Bella is just one of the many, many elephants that fight this brutal battle AT THE HANDS OF HUMANS, EVERY DAY OF THEIR LIVES. And this must stop!!!!

This writer actually feels sorry for those of you who have never known an elephant. These magnificent creatures are very family oriented, have an extraordinary love of one another and feel pain, fear and anxiety the same as we do. Remember this. I have been personal friends with elephants over the years. My book, God and Animals, What the Bible says About Animals and Heaven can be obtained on AMAZON. You will never look at any animal the same way again after reading it.

At least, Bella had a couple of weeks of a good, caring life when she was rescued by Wildlife SOS. In the obituary for Bella, the SOS staff wrote: "I will remember Bella the way I last saw her, munching on sugarcane and curiously walking around on soft mud. She was as strong as ever as she ever could be, balancing a lifetime of physical and psychological torture on her weak limbs.

"She breathed her last at 1:18 PM on 14th November, 2019, surrounded by the people who cared for her and respected her strength in the way she truly deserved.

"Somewhere, you take a huge piece of my heart with you, Bella, and I don't really need it back because you will be the strength and inspiration behind everything that I do for the welfare of the wild."

We Miss You. Wildlife SOS.

And from me...Rest in peace Beautiful Bella. 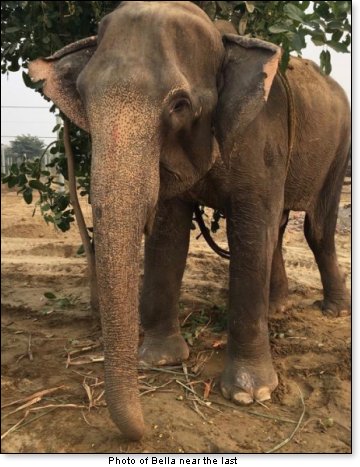 This columnist cried again just writing this. READERS, help us. by writing your representatives and ask that they sponsor a bill making it a crime to harm-mistreat an animal. This should be a felony. I already have a couple of representatives who are willing to assist in crafting this law. You can do the same.