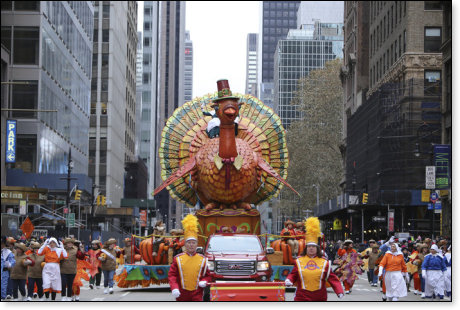 NEW YORK CITY 11/28/19 – HOORAY! Today's Macy's Thanksgiving Parade was a PARADE! They seemed to have taken a mental enema several years ago when the marchers in the parades dwindled while the new look included outright promotions for questionable Broadway shows. This means they created a complete scene from several of them which was performed in front of the huge store on 34th Street.....trendy Broadway shows that is. Trendy means crude immoral scenes with the LGBTQ message prominent.

An early on "parade" treated us to Kinky Boots, a very perverted production that could only be enjoyed by queers. The entire performance area in front of Macy's consisted of sashaying, sodomites swishing across the area wearing short shorts with thigh high red women's boots that generously showed some thigh flesh.. It looked absolutely ridiculous because it was. And think too, the parade features the most moral and generous figure in the world, Santa Claus. Think about it, he was never known to cheat on Mrs. Claus. Sadly, everything before his much heralded entrance seemed to center on rebellion of all decent things in life. Remember, this parade originally was heralded as "for children" and was beamed throughout America on NBC TV.

Another offering, courtesy of the show, "Prom", was set in high school where the annual prom was being prepared. A lesbian female student demanded to be able to bring her girlfriend as her partner to the prom. There were, of course dramatic moments as the naysayers and Christian teachers stoutly stated their objections for a two-girl "couple." But alas, the storms quieted down and the fresh Spring air along with warmth filled the consciousness of the world and the lesbian and her girlfriend were welcomed on the Prom dance floor as everyone cheered. Yep, they became heroes for exhibiting vulgarity. They were sexually confused but their message went out loud and clear to the crowds on the street (2 million this year) and through the NBC TV Network.

Broadway shows need promoting since the price of seats, beginning in the balcony (the nosebleed section) begin at over $150.00. Yep, "The cheap seats." On the main floor the prices are significantly higher. with front row and close to front row seats costing over $1.500 dollars...15 HUNDRED BUCKS To see dirty-old-men entertainment? That is, unfortunately, life today.

My family avoided Macy's following Kinky Boots. A parade means just that....a walking extravaganza featuring bands, baton twirlers. marching in time to lively musical compositions. The bands do intricate formations and are always entertaining to watch. Remember the music of John Philip Sousa? A wide range of music can be employed for these marching parades. And the rat-ti-tat sounds of the drums is a lift-up pep inspiring experience. When they cut down the marching bands and offered instead LGBTQ insights the parades were no longer parades but propaganda displays.

This columnist wrote a few stories over the years of the outrage of this "family" store and their desire to pervert the world. However, the critical columns about them betraying the public, especially children, seemed to have reached the right department, the memo was sent out, and this year, the event did indeed did resemble a family Christmas Parade.

It is to be noted that his writer does not hate gays. Everyone to his own hobby. However I don't want anyone shoving their personal lifestyle into our faces and demanding we accept it and even participate in it.

Pushing the "gay" agenda is especially hurtful to those who have been violently sexualized by a gay scoutmaster, teacher, music instructor, 'funny uncle' or any other misfit. All men should concentrate on keeping their zippers zipped. Take a look at Santa and Mrs. Claus. They both seem very happy, jolly and loving. They have eyes only for each other. We could all learn a lot from them. And as this Christmas approaches, let's keep our eyes on the real reason for Christmas, Jesus Christ.