December 27, 2019
Even though Jordan and Egypt are considered 'allies' of The United States, they are still controlled by Islam. This means it is a mistake to trust them. The United States unwisely sent them bomb-sniffing dogs to 'protect the people.' It was reported that the State Department repossessed 10 dogs from Morocco after learning that the dogs were NOT being used for their intended purpose. Should this be any surprise. Doesn't Muslim history stand for anything?

There was a cost to this knuckle-headed scheme which would somehow buy favor with Muslims. When the dogs are sent to these countries, it costs the U.S. State Department $500.00 annually (starting in 2017), as well as $540.00 to keep a veterinarian (which started in 2018). Knowing Muslim history, that money was not used for the animals but to help further Islam.

What is worse, reports by a whistleblower shows horrific animal abuse. The Wall Street Journal reported that two dogs died in Jordan as a result of neglect and mistreatment this year, including one death caused by heat stroke and another by poisoning from an insecticide. A veterinarian testified that heat stroke was a preventable and especially terrible way for a dog to die.

What is worse, the dogs were not fed properly, many being reduced to skin and bones. We have a photo of an emaciated dog on duty for the Muslims that we felt was disturbing enough not to publish. No dog should ever be sent to an Islamic country.

In addition, three out of 10 dogs provided to Egypt in August of 2018 died. Now get this: The Egyptian authorities have REFUSED to grant U.S. personnel access to the dogs we sent or their kennels. So in typical Muslim fashion they are hiding their dastardly deeds. And we, the stupid Americans do not challenge this? We simply take their word that everything is hunky dory? NONSENSE!!

First of all, why should we risk the lives of dogs to protect the lives of those who hate us? And why should we pay the bills for it? Especially when it is known that Mohammed did NOT like dogs. The Hadith and other sources record this distaste of their "filth' and even the notion that a dog walking in front of a Muslim praying negates the effect of those prayers. He even called for killing them.

From Abu Dawud #2839: Abd Allah B. Burhaffal reported the apostle of Allah as saying, "Were dogs not a species of creature I should command that they all be killed: but kill every pure black one.

The Hadith's note for #2839 says: "The prophet did not order the killing of all the dogs, for some are to be retained for hunting and watching. He ordered to kill the jet black ones. They might be more mischievous among them.

This is only a few of the "laws" for Muslims regarding dogs. It gets even worse as one digs deeper. The original writer of this story; David Paulin, said this: "To me, dogs are one of God's greatest gifts to us, once humanity had the wit to use our gift of intelligence to breed dogs from wolves. The notion of mistreating, or inflicting suffering on these noble bests is so repulsive to me that I cannot credit those doing so – individually OR CULTURALLY – with basic humanity.

This writer offers a big AMEN to that. Jesus created all the beasts of the earth including us. Jesus loves the animals He created. We should do the same. 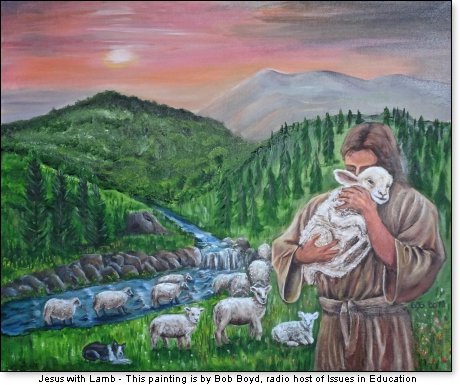