January 8, 2020
SYDNEY, AUSTRALIA 1/7/20. There has already been enough money made through the "Climate Change" hoax. Al Gore earned over a million dollars to front and promote the scam. If they pull off a "world tax" to save us from climate change he will get over a billion bux. That 'world tax' would be to save us from perishing on a scorched earth which is bound to happen doncha know.

So to blame "climate change" on the fires in Australia and the ones in California with a flaming illustration is just plain nuts...instigated by nuts. NASA told me that hot and cold temperatures are controlled soley by the sun. Period!

Literate folks who read news accounts thoughtfully, know that not long after 9/11, Muslims bragged that they will destroy the non-Muslim world by fire! This writer saw and heard this on the TV News. They also said they would poison our food. How would they do that? By more Muslims taking flying lessons to fly crop dusters. Instead a spraying nutrients to the crops that feed us all, they would spray poison.

Yet they are populating vast areas in the United States, allowed to come and go into this country as they please, where they have brought in violence, child rape and murder, turning formerly peaceful areas into areas of stress for citizens. They have made it clear that they want a national caliphate, meaning all areas they occupy, under Islamic control.

They have 26 Muslim training camps in the United States that no U.S. citizen can enter including the police. These camps where only militant Muslims gather and train, are strategically located. One, for instance, is located close to New York City and another near Washington, D.C.

And what are they trained for in these camps that nobody, but them, can enter? They are trained to kill Americans and take over The United States.

The fires in California burned down an entire town, Paradise, California, and in the Hollywood area, mansions of the stars were destroyed. These fires were breaking out everywhere, apparently on their own. They managed to blame one of them on a campfire even though the ones in that area at that time were never found. Convenient.

The Daily Telegraph reported that they now know how the Australian fires started. You will not see this in most newspapers. They were deliberately started by two Muslim teenagers living in Australia with their parents. Those teens, Fadi Zraika and his brother, Abraham were seen, now get this, LAUGHING as they left court yesterday and walked out free. Got that? Walked free after setting Australia on fire. 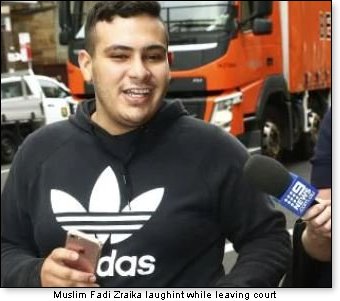 Hundreds of people have been injured, lost their homes and all their possessions and over a million animals that lived in the forests were burned to death. A horrible death that should never have happened. Yet these two Muslim punks who caused all of this can walk out of the court that did not punish them, while laughing. Yes, smirking laughter.

The Muslims at least keep their word. They stated that they would burn down the non-Islamic world and that is what they have been doing. And yet our borders stay open. President Trump wanted to put a ban on further Muslim entry to this country, but received so much flak from do-gooders that he reversed that ban. Those same do-gooders preach about how we need 'diversity' in our land. That has not enriched us but has resulted only in people antagonizing and fighting with each other.

Years ago when I went to Europe frequently, it was amazing to enter each country and see distinct people living there, with their distinct personalities, speech habits and culture. Those countries were not a mixed batch of humanity with various habits and traditions that they tried to push on each other, but united in their specific culture.

And this answers the entire immigration discussion.

Let me add, that I never met a Muslim I didn't like. They are very hospitable. It is not necessary to count your change when doing business with them. When I visited a tent out in the deserts of Israel, they invited me in, insisted on serving me a meal and we had a great discussion.

The problem with them is their religion that they were persuaded to accept. They were misled by recruiters. That is the problem. But God has a way of reaching people no matter who they are or where they are. Millions of Muslims have experienced a visitation from Jesus Christ in their dreams. These experiences are real since hundreds more have had the very same exact dream. And it was so real that they had to flee from their homes since their families would kill them for leaving Islam.

I have met former Muslims who are now Christians including a couple of them working at Liberty University. They see the absolute truth of the Bible and could never go back to what they now recognize as a false religion. They really get into the Bible and become great bible teachers. I wish Christians would embrace our religion like the misinformed Muslims embrace theirs. If Christians became more dedicated the better life would be.

It is to be noted that many Christians have been taken in by cults and false Christianity with many losing the goodness of the faith. They eventually find the truth and get back on track and testify in churches about their mistake. And their entire countenance is peaceful and happy.

I pray that the Muslims, who can be charming, will get on the right track, and what great neighbors they would be.