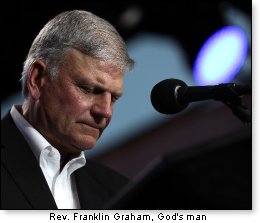 Franklin Graham was scheduled to preach the Gospel of Jesus Christ in the United Kingdom. What a treat this would have been for the UK. What a gift this would have been for everyone fortunate enough to be at his meetings. Rev. Graham is the founder of Samaritan's Purse, where ministers who have been trained for the work of a chaplain go to areas where disaster has struck, not only bringing hope, but portable hospitals, food, medicine, and shelter to deal with the elements.

All who go to these areas are volunteers with one desire in mind – to bring hope to all who have been devastated by the cruelty of nature. Rev. Graham and the volunteers go to these places to bring encouragement to all during the worst time of their lives, while expecting absolutely nothing in return. They are there to GIVE. We've heard many testimonies from people stating that there is no way they could have made it, physically or mentally, had it not been for Samaritan's Purse and Franklin Graham.

Rev. Graham's UK tour, scheduled to begin in June, was to include Glasgow, Newcastle, Sheffield, Milton Keynes, Cardiff, Birmingham, and London. Over a million people were looking forward to the visit. Everything had been planned and prepared. However, let us give credit where credit is due.

There is an entity who wishes only harm and suffering amongst the people of the world. He wants nobody to be happy, or prosperous. That is why this entity spends extra time trying to sabotage marriages, wanting only to see strife in the home, which also affects the children of those families so terribly that many grow up to become criminals and con-men.

While this entity is very real, he is clever enough to try and convince the world that, now get this, he does not exist. That is the most preposterous lie ever devised. This can be said without wavering since the most famous book in the world, read by millions of people all over the world, advises us to avoid contact with this dangerous entity.

So who is this mysterious entity? None other than his satanic majesty, the devil. A background check on him revealed that he once worked with God as an angel, a very high position. He was called Lucifer – The Angel of Light. Lucifer introduced PRIDE into Heaven. Seeing how God was universally worshipped, Lucifer foolishly tried to kick God out of heaven so he could take over and receive all the adulation.

It was Lucifer who got kicked out of heaven, not God. When he recovered from the fall to earth, Satan began recruiting disciples who could carry out his evil mission on earth while pulling in all the evil spirits in existence. It became a settled fact that where there is good, evil is nearby. Satan made certain of this so we wouldn't become too confident in life.

The one thing all the devil's disciples agreed upon was to do some satanic publicity strategies by circulating "information" that the devil does not exist but in the minds of feeble people. Attacks on the Bible itself began to arise, with efforts to keep all of Scripture under wraps. Hostility against Christianity became commonplace. The one thing Satan did not, DOES NOT, want is for the Word of God to get out in any fashion. Just to hear the Word of God can change lives, which brings us to the current headlines.

Rev. Franklin Graham has just learned that his preaching tour of the UK has been CANCELLED. By who?? No surprise here. By the LGBTQU, a mentally sick organization of misfits who want to keep Sodom and Gomorrah in place and who stated that Dr. Graham's views are incompatible with LGBTQU views. You bet they are. But it is to be recognized that God forgives sin.

ACC Liverpool, where Graham was scheduled to speak in June as part of a tour of the UK, made the announcement with this crazy statement: "We can no longer reconcile the balance between freedom of speech, and the divisive impact this event is having in this city." How's that again?

This is garbage! Rev. Graham and his father, Evangelist Billy Graham, have consistently done the opposite. They have brought people together as they learn that we were created by God who made us all in His likeness and has a purpose for each and every life on earth, meaning we must respect one another.

Remember, Franklin Graham was not coming to just talk to LGBTQU folk, even though they would be welcome to come. They are a minority of the citizenship of any country. There are thousands upon thousands of regular people who want to hear the Gospel of Jesus Christ, but apparently if the LGBTQU folks say, "You folks are not allowed to see or hear this because it offends us and we don't like it," then the wishes of a divergent group of people are allowed to affect ALL of us. This is insane!

What is most intriguing is that the so-called "gay" community, whose sexual habits would disgust most people if it was known what they do, is now able to dictate what the rest of the world sees, or hears. This is brainwashing and must stop. And Satan, their sponsor, has the goal to corrupt everyone on earth, meaning, to keep them out of God's Hand. Better think about that.

So what about the temptations Satan places on us? First of all, Satan cannot tempt you. He can only make a suggestion or idea that might be appealing. Stop his goal right there. When he makes a suggestion, be like the traffic cop – "keep moving – you cannot stop here!" His idea is to make you think about what was suggested. The more you think about it, the more appealing the idea becomes. THEN it becomes a temptation that you might not be able to withstand. Stop it before it starts.

This is why we need unchained Christian witnesses in the world today. Think about this, readers. Let us relearn what "courtesy" means, along with honesty. Let us all realize that, yes, there IS an entity called Satan. Do not fall for his wiles.

And for the officials in the UK: What on earth are you thinking? Your job is to protect the people, not hand them over to any enemy that wants them for any reason. Don't slam the door on the Rev. Franklin Graham. Welcome him. He is there to encourage the people.

God bless Franklin Graham. We need more like him in this world.