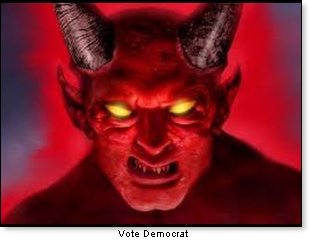 The Demoncrap bastards just did it again. How hold on, this particular word in that sentence is not a cuss word. Indeed it is a Biblical term to describe the questionable circumstances of one's birth. Christians are born of God. The others are born of Satan as described clearly in God's Word, The Bible Quote: ""Ye are of your father the devil, and the lusts of your father ye will do. He was a murderer from the beginning, and abode not in the truth, because there is no truth in him. When he speaketh a lie, he speaketh of his own: for he is a liar, and the father of it." (John 8:44)

This qualifies as "questionable birth details." As can be seen, one of the two races is a mongrel race with mange, which is an inflammatory disease in dogs caused by the Demodex (democrat) mite.

Man was originally made in the image of God. Then the Democrats materialized and corrupted the image of God by substituting their own words instead of God's Words. So how does such change come about and where are these thunderheads bred?

There are many briar patch breeding grounds that form and spawn democrats. One of those is the pathetic TV network, MSNBC with an announcer who stated that "hopefully, Americans dying from Coronavirus will "take down Trump's presidency." And who said this on the MSNBC Leftist Network? White House host, Nicolle Wallace and Princeton professor Eddie Glaude. They were actually cheering on for more Americans to die from the virus so that President Trump would get the blame which could make this, "President Trump's "Katrina."

The next segment featured Glaude and Wallace who both got excited over the idea that, now get this, "Yes, hundreds of people will die, but it would be worth it because finally some of President Trump's base would stop supporting him."

The next day, CNN's leftist voice, Christine Romans tore into President Trump for "really downplaying the virus," stating with delight, "some say this now looks like a Hurricane Katrina moment." Anything to knock President Donald J. Trump

Yep, this preacher came close to cussing when learning that leftist news disorganizations cheered on the fact that people would die due to the virus which would be worth it since it would cause some of President Trump's base to stop supporting him. Talk about uncontrolled hatred!! This kind of thinking can be classified as a mental health issue.

Actually, instead of framing my own words about this democrat outrage, I went to a non-Christian neighbor and asked him to say some appropriate words to cover this situation, which he did.

I suppose we should understand why the demoncrats would want all Trump Supporters to die. That way they could turn the entire continent into a democrat-Communist paradise. By that time NASA should have its passenger space ships completed for those of us who would book a trip to Mars...count me in.