Just when governors are ready to cancel the quarantine, with all citizens staying home and distancing themselves from one another during the Coronavirus emergency, a new virus has formed and is running loose in the United States, and this happened just when we were able to get rid of the face masks.

Unlike the Coronavirus, which affected all people, this virus, according to medical professionals, attacks a specific group of people, mostly democrats who seem to have been infected by a virus of stupidity. Stupid cannot really be fixed. It is an inbred condition.

Three Muslim women, members of the Democrat Party, have been voted into congress. They would not take their oath on the Bible as is tradition in America, but used a Koran instead. What in insult! Every decision that they influenced was to serve their country not ours and to serve their "religion" not Christianity. From there the muslims will multiply until they are the majority in the house and can take control which is their goal.

Democrats have invited all immigrants to simply cross the border, come in and go on the government payroll, meaning housing, education and medical assistance and even food, while genuine Americans have to struggle to obtain such services.

The stupid democrats have encouraged all illegal immigrants to simply cross the border, come in, and go on the government payroll, meaning housing, education and medical assistance. These immigrants have caused more crimes, rapes and disruption than real Americans who pay their way....not like the illegals who do not pay their way.

We have just barely managed to survive the Coronavirus pandemic. Most Americans have lost their jobs since businesses were ordered closed, cannot pay their rent or mortgages, nor food bills while the illegals get everything they need.

The government is doing its best to help Americans over the ditch by sending relief money to help Americans who have lost their jobs which was absolutely not their fault. They are receiving stimulus checks and unemployment insurance payments to help them as they try to get back on their feet.

California, a fully democrat Communist state just defended their title of being the land of fruits and nuts by allowing their governor, Gavin Newsom to....now sit down....approve $125 million in relief funding FOR ILLEGAL ALIENS. Yes, you read that right.

At a time when 22 million (and counting) Americans are facing unemployment and are struggling to pay their bills, that state and their local officials insist upon putting illegals first. Well, they DO vote.

Congresswoman Alexandria Ocasio-Cortez managed to get voted in as congresswoman from the Bronx, serving the 14th Congressional District.

The first thing she accomplished was to kill a wonderful boost to New York with jobs galore. Amazon wanted to set up their headquarters there where they would employ 25,000 people. and SHE KILLED IT! Deliberately killed it! Why? She is an avowed socialist (Communist) so what does that tell you?

Twenty Five Thousand people would have good paying jobs there and she killed it, then bragged about Amazon not coming to the city. This is from a tweet, one of many, she sent to her friends in the Communist Party as soon as she sabotaged the deal.

She was so unbusinesslike and non-welcoming, that Amazon felt, and stated publicly, that Cortez would provide a hostile environment for their company. And that action by her and her socialist leanings cost New York 25,000 lobs that instead went somewhere else. She should have been impeached then and there .

This is just plain dumb, which is why we declare this virus that has wrapped around the democrats is called, the Virus of Stupidity. So watch out....don't get too close to a Democrat or vote for one, less the virus comes upon you. 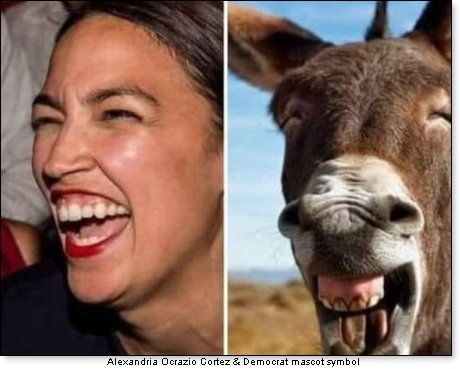