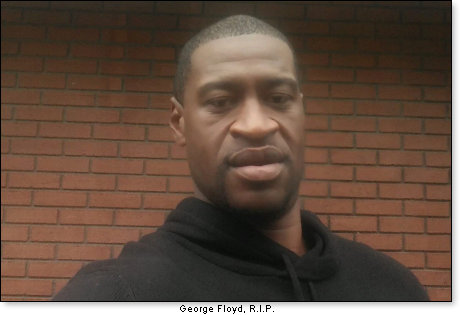 The reason given by police for taking down and choking George Floyd to death was that he tried to pay for something [with] what turned out to be a counterfeit 20 dollar bill. What? He could have gotten that bill in another transaction and had no idea it was bogus. This writer knows this since it once happened to me.....only I was not tackled to the ground by a cop and strangled to death. I immediately surrendered that bill when it was discovered to be counterfeit, and tried to determine where I received that as change.

There was no such benefit-of-the-doubt for Floyd, since the cop, Derek Chauvin was quick to label him as a counterfeiter, overpowered him, threw him to the ground and pressed his knee with full body weight onto Floyd's neck while he weakly gasped, "I can't breathe.....I can't breathe." After nine minutes of what can only be described as hideous torture, there were no further breaths. George Floyd, who had himself been victimized by being given a counterfeit bill, was dead. Killed by the cop who should have helped him.

So that rogue cop who killed Floyd immediately identified him as a counterfeiter even though there was no printing press anywhere in the area. However, for that particular cop, Floyd was guilty because, well, he was black.

It is to be noted that God created only one race, please let this soak in....one race, and that was, and is, the human race. As Ching Chow, the philosopher said, "A bum in any group is a bum, but do not blame group." We are all God's people even though not everyone knows it yet. It is up to us to always reflect God in our own lives to give others a chance to understand this.

Every human being deserves to be treated with dignity. How about the cops? Some feel that the use of the name, 'cops' is degrading to police officers. Actually it is not. That name started in jolly ole England many years ago. The police officers carried copper shields to defend themselves from objects thrown at them. They were such a familiar sight that when trouble erupted somewhere, knowing they carried the copper shields, someone said, :Call the coppers." From that time on, they were called coppers, then later on, just cops.

Living an enjoyable life is difficult today because of the unrest, caused by Democrat Communists who have made it known that they must conquer America, the only country standing in the way of a One World Order Dictatorship due to the fact that our entire country is dotted with churches. A Christian mind cannot be enslaved by strange doctrines. Communist China just this week tore down hundreds of churches, 47 in Beijing alone. Got the picture? This is what is behind all the confusion, fights, unrest and stereotypes.

This writer loves people, knowing that every human being is uniquely designed and created by God. I've known many very famous people, a couple of presidents, movie stars, many who are not famous, and indeed, people from all walks of life and I have learned from every one of them without exception. Everybody can teach us something.

Let us be determined never to allow any other person to warp our perception of any human being again.

Remember, that every person we meet is the only one of him or her in the entire world. That makes it a real treat and privilege to meet and talk to that person. It costs nothing to simply be kind.

Again, the ONLY reason for such hatred amongst people is the agitation constantly poured out by very evil people who want to take over the world for their perverted agendas, giving them the unbridled power they desperately crave which seems to be the undermining motive of all who are trying to wreck the United States of America.

Let us not allow them to get away with it. Their secret is now out. Let the space we occupy be a positive space and an encouragement to all we meet.