The nations' newspapers and news reports state that the recounts of this presidential election show no evidence of voter suppression or manipulation. Basement Biden is the new president, by golly, like it or not. You will like socialism-Communism once you get used to it. At least that's what they say.

Every news provider, all of which are controlled by George Soros, the Hungarian Communist infiltrator, has instructed all news outlets to discount any challenges to the voting machines, called Dominion Computers, which Soros also owns. These machines have been proved to switch votes from Trump to Biden.

The Soros Media have all published that any challenge to the 2020 election votes has proven positively that no tampering or fraud was involved. The Trump supporters have no proof to claim otherwise, say they. Well, ok.

Thousands of voter registrations have been found dumped in trash cans with the name Trump on them. Probably just a coincidence. Something else rather unsettling is that many voters have risen from the dead in order to vote, provoking unusual traffic in the cemeteries at night, which could be a bit spooky if you took a short cut through the graveyard. 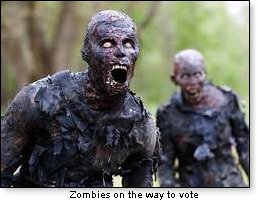 The movies prove that there ARE zombies, y'know, and they have been all over the place during this voting season. The proof is in the hundreds of ballots with their signatures. They had to be zombies to sign those ballots. If they were just plain dead, they could not have furnished signatures. Yet the news media says there is no evidence to prove vote tampering. So who are we going to believe, the news media or the zombies?

What we did not count on was that all zombies seem to be Democrats. This should not come as a surprise to researchers, as most Democrats are deadheads. Plus, these cadavers rise out of the graves from the left side of the casket.

Election observers are given full constitutional rights to be there and see the ballots, even though they have to be back 100 feet from where the ballots are stacked and moved. Now don't resort to conspiracy thinking. This has to do with distancing for our own safety from the Covid 19 coronavirus. It has nothing to do with not allowing anyone to see the ballots. Really. We know because they said so.

We must trust all leaders, never wavering in our obedience to them. Do as they say and we will all prosper. After all, they are only doing this for our own good. That's what the Communist Party wants us to know. But they will not give us a guarantee that it IS for our own good. Until they do, this writer will simply be an observer.