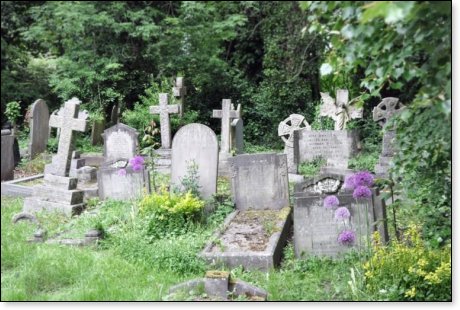 Having heard numerous stories of dead people voting during this past election, apparently there has been activity in the grave yards for longer than we have suspected. Not sure if these are actual sightings or simply mirages amongst the voters, who have bravely documented this fact. Not Republican voters, mind you, but Democrats who have walked through the still black nights with a mission. A mission, say they, that will provide a satisfactory climax to the most important presidential election in history.

Upon checking thoroughly, thousands of voter ballots did come directly from the cemetery. Even though this writer believes in life after death he does not agree that there is voting life after death. But apparently, there is. It Is reported by reliable sources that there has always been strange activity in the grave yards. Gulp! Especially during the 1970s.

During that time, while in the evangelistic field, preaching in churches throughout the U.S., I did a swing through Pennsylvania.

Acting as my manager while arranging the churches where I was to preach, was Grace Nicodem, who lived in Latrobe.

Nobody could have done a better job in managing this tour.

While touring, this writer very much enjoys visiting historical places. During a couple of free days, I asked to see any historical places that could be visited. Yep, there is a historical cemetery that one might find interesting.

It was located out in the boondocks. So off we went. This was before I learned that those buried there could come out of the graves as zombies in the future and vote with their phantom signatures that were so prominent in this past election.

The cemetery was on a dusty road in the middle of nowhere. Grace and I got out of the car, shut the door and made our way into the facility. It could be seen by the dates on the tombstones that this marble orchard had been there for longer than a guilty person's excuse.

As she showed me the various, almost antique graves, we hit a beehive with our feet. The bees did not consider whether this was intentional or not and charged us fiercely to make us pay for our trespass. They began by stinging our ankles as we hopped up and down, on one foot, then the other.

Dust was rising in the distance as a car was lumbering down the dirt road. As it went past the graveyard, where we could be seen hopping up and down, it became a ghost dance to the driver of the car, who shifted gears and spun his tires getting out of that area. He would never come down that road again. This happened a few times.

It is to be wondered if those who drove past at that moment, shifted gears and raced down that road, had any thoughts about dead people voting. They might have since they saw firsthand, what they thought were two dead people dancing in the cemetery.

Since this current election which is still being debated, 280,000 Pennsylvania ballots disappeared. How convenient. Yep, the zombies are still very active during certain election seasons and will continue to be in the future. Be careful walking through the cemetery. Especially at night.