Rev. Austin Miles
Is U.S. the latest banana republic? Not by Trump’s order! 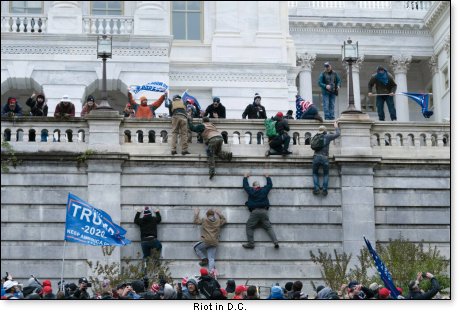 WASHINGTON, D.C., January 6, 2021. It was an event nobody expected to see even though this writer saw it coming years ago. On January 6th, America was seen as just another Banana Republic by its unruly chaotic protest that virtually shut down the Capitol of The United States. It was mobs breaking into the Capitol of America, breaking windows in so doing while destroying property and tearing apart offices and dumping desk contents on the floor.

These were the desks of congresspersons and senators. Nancy Pelosi’s office was also trashed and her papers scattered on the floor.

So how could this happen in the greatest country in the world? We could expect this kind of conduct in Venezuela and other Communist-controlled countries, but it was never expected here.

Fasten your seat belt. The one unwittingly responsible for this outrageous conduct in the nation's Capitol was recently anointed as the most respected man in the U.S. for 2020. That man is Donald J. Trump, who went on to become the most admired president in history and accomplished everything he said he would do.

President Trump DID NOT BRING MOBS TO THE NATION’S CAPITOL to threaten or to destroy property. Now get this straight: He had asked publicly for those who still support him to gather in Washington, D.C., to demonstrate that they stood with him. It was to be a visual only, with a quiet march down the streets of D.C. This way the citizens would be able to see his solid support.

He absolutely did not tell his followers to storm the Capitol building and cause violent destruction, nor did his actions result in the four deaths which should never have happened.

The Communist Party, the most patient adversary in the world, is like the lion in the circus cage who watches carefully for the trainer to slip so they can pounce upon him and tear him apart. That has been witnessed by this writer. The Reds were waiting for the right moment. As soon as they heard that President Trump was bringing many supporters to the nation’s Capitol, they immediately made plans to have their own people there to infiltrate, turning those peaceful persons into a violent mob and turning Trump’s supportive gathering into a riot.

And yes, Antifa and BLM (both Communist organizations) were rushed to D.C. in buses, according to several sources, and would overpower the number of people who simply supported President Trump.

There is much controversy regarding the last presidential election. There is no doubt the election was tampered with. We could name at least a dozen bad actors, including the Dominion voting machines allegedly tied to China that turned Trump votes to Biden. There were also thousands of signed ballots that wound up discarded, many dumped into rivers. Meanwhile, all the Democrat media were dismissing voter irregularity and called each of those FACTS "false" and misleading. Residue of a bull!

This writer is sick of the news media’s lies published to further their own misguided political plans. Yes, this election was totally rigged and what’s more, there is solid documentation to verify this.

And it is time to charge the Democratic Party with malfeasance and charge them with four deaths of innocent people, including an Air Force veteran, a woman who served her country faithfully. She was shot in the Capitol building, and died there.

President Donald Trump would have no part in any of this. He, like the Air Force veteran, simply wanted to serve his country. The Dem Party should add on to this title: The Dem Party Liars.