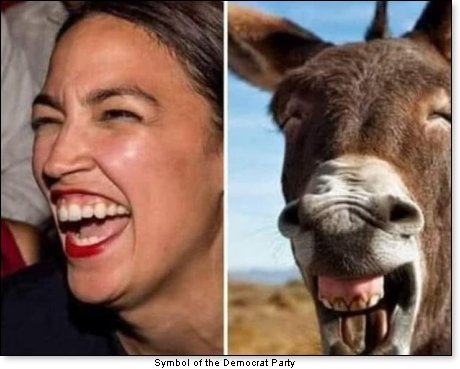 The Demonrat Party has now become properly known as The Party of Hatred. Their hatred for President Donald Trump goes beyond any out of control mental issues that have ever been recorded. They hate him so badly that it is said that democrats rise from their sleep two hours before daylight so they have a couple of extra hours to hate him with. OK, OK, this was added by this writer in order to enhance the story line.

But it is not completely exaggeration. Take a look at this:

Democrats have passed a law for a president (in this case President Donald Trump) to be banned from being buried in Arlington Cemetery when the time comes, using as their reason (?) that he was impeached twice, AND he is responsible for the January 6th riot at the Capitol Building. This has taken hatred to a new low.

First of all, He did NOT cause the riot that took five lives with dozens injured. Indeed, he told those who were going to march in his behalf to be peaceful as this was to simply show support for him. Of course George Soros's jumped in with his bank account to pay hundreds of others to join that march of support and cause havoc along with injuries, property destruction and deaths as our nation's capitol was attacked and invaded, giving an ugly picture of The United States for the world to witness.

And of course the mainstream so-called media sez that no guns were taken into the Capitol Building. RESIDUE OF A BULL!! One young woman was shot to death in the halls of the Capitol. That required a gun which was clearly there to shoot this innocent woman or anybody else who got in the way . She was a veteran. Just another lie from the fake news media.

But let's be clear about the plan to have him banned from proper burial due to the two phony "impeachments" that were filed against him. Both were lacking in any substance whatsoever. Indeed the second impeachment came after he was no longer president and did not live in the White House or have an office there. So the idea under those circumstances should have caused arched eyebrows everywhere since they were trying to impeach him from an office he did not even occupy. What the Communist Democrats really wanted was to have him taken down never to be seen again. He was the biggest threat to Communism that had ever been seen.

And he was the best thing to happen to our country. With him in the Oval Office, the economy rose to the highest level ever, he dealt firmly with China when our past leaders bowed to them weakly and let them walk all over us as they stole all our ideas for their own profit. And he kept us safe.

This 'no respectable funeral service' law is H.R.484 that states: "Twice impeached" presidents will be banned from being buried at Arlington National Cemetery and prohibit federal funds from being used to display their names or acknowledge their achievements."

So there! This so called law has obviously been hastened into the books to show the leftists contempt for a president who actually served the people and the interest of our country. Of course the reds hate that.

Here is another sick take on this gobbly gook, brought to our attention by Eddie Zippperer: "The No Glory for Hate Act" would ban the government from commemorating Mr. Trump in any way. The legislation would prevent federal projects, buildings, statues, or lands from being named after Mr. Trump."

And this question. What hate act did Donald Trump ever commit?? I can just feel the energy of democrats trying to come up with something. Anything.

How many have noticed that all these new laws, hastily put on the books, are specifically named after a living individual, not a law at large for the public, but aimed at a specific U.S. President that the Communists hate. Their idea is to make him a "non-person." This brings back many fond memories of the Old Soviet Union. Any notable person there who displeased the authorities in any way are shuffled into the non-person area, with no mentions of them or their accomplishments for the public to see ever again.

And if this is not enough, the officials have demanded that the two ice rinks in Central Park, New York, Wollman Rink and Lasker Rink put there by Donald Trump, be erased out of sight, even though many thousands of people have enjoyed those rinks including this author in younger years. They hate him so badly that they want every trace of him erased. We cannot let that happen.

This kind of hatred can only come from Satan himself. And here is the Scriptures for Democrats:

John 8:44 "You are of your father the devil, and you want to carry out your fathers desires. He was a murderer from the beginning and does not stand in the truth, because there is no truth in him. When he tells a lie, he speaks from his own nature, because he is a liar and the father of lies." Holman Christian Standard Bible

This is where the word Bastard begins...with uncertain birth details.

What does the bible say about the Left and the Right. Here it is: Ecclesiastes 10:2 says; "The heart of the wise inclines to the RIGHT, but the heart of the fool to the LEFT. It surely cannot get any simpler than that.

Democrats, with the exception of the time my cousin, John F. Kennedy, was President, has become indeed the party of Satan.