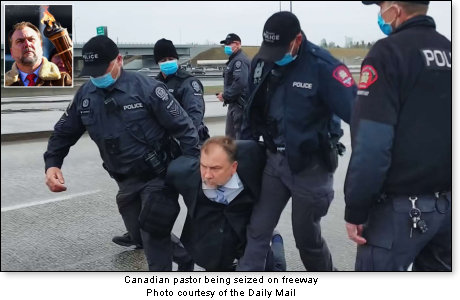 Pastor Arrested for, now get this, inviting people to come to church! WHAT???? And the exact charge? "Inciting people to worship." That is what is on the books. So it is now against the law to invite someone to come to church? Even though this specific case took place in Canada, it is goose stepping its way across the border to the U.S. Indeed the U.S. authorities have been working overtime to close all churches here. One who has been bullied by the government is Pastor John Maxwell of California.

They have tried their best to close his church down, but without success. Other churches have only been warned that the muscle needed is nearby.

The Pastor, Rev. Artur Pawlowski who came to Canada from Poland, an iron curtain country, where the Communists were in charge did not expect this in Canada. Make no mistake about it: Canada is a Socialist Country with Socialized Medicine. However if they find fault with any incoming patient, they will turn that person away. So what good is it? What advantage is there? So if you need medical help, they will do nothing if you are not on the accepted list. And there is nowhere else to go for help. That is some of the joys of Communism.

The Canadian Gestapo has tried more than once to close down Rev. Pawlowski's church. They were verbally thrown out. So they determined a way to get him. And where did that take place? They followed him from his church and in the middle of the freeway, they got behind him and with the sudden blasting of sirens and flashing lights by several police cars, demanded that he stop, then and there, which he did.

And where did they stop him? In the center lane of that busy freeway. They ordered him out of his car, threw him to the ground and handcuffed him with his hands behind his back. Meanwhile vehicles are speeding by in the other lanes.

What is worse, these no good bastards (now don't get your knickers in a twist – this is a biblical term meaning one whose parentage is in question) bragged about the takedown of this humble pastor by the Swat Team. And the Bible does say to them, 'YOUR FATHER, THE DEVIL" John 8:44, so that should settle it.

This column has been alerting readers for years to batten down the hatches as Communism makes its way to America. It is now here. I have spent time behind the Iron Curtain and learned all they planned to do in order to take over America. The first object would be to close down all the churches here. America, because of being a Christian Nation with active churches, was the only country standing in the way of World Domination. They know a Christian mind cannot be enslaved. You atheists, take note of this or you too could wind up in the gulag.

They needed to strip us of all religion and churches in order to accomplish their goal, with George Soros financing every step of the way, to become leaders of the world, with Soros being Potentate. Yes, we were the only holdout for this scheme.

Tough times are not only here, but the worst is ahead. The first thing we MUST do is to impeach Joe Biden. He is wrecking our country. There are plenty of charges to use. Churches, hold your ground. We must reclose the borders as President Trump did. Biden reversed Trumps rule and opened the borders to the world, telling everyone to "come on in." And did they ever. About 17,000 a day, which included gangsters, drug dealers, M.S. gang members, and human traffickers. Biden is determined to make America another Venezuela.

Biden (I will not refer to him as president Biden) cancelled every good thing President Trump accomplished. This column stated over four months ago that if Biden gets in, gas prices will skyrocket. We will begin with $5.00 a gallon and that price will continue to rise out of sight. That is taking place now.

Biden must go for the sake of all of us. Write letters to the editor of all publications and send them to D.C. Otherwise, we will hear the squeaks of the Iron Curtain being closed behind us.

And let it be known that it is a FELONY to interrupt a religious (church) service. Keep this in mind. And don't hesitate to use it if the police storm into a church during services. I have when a drunk came in with a loud cursing voice, disrupting the service.

And let us all stay in a state of prayer.

Photo Caption: Canadian Pastor Being Seized on Freeway-Photo Courtesy of The Daily Mail