October 30, 2013
For several years now, many of us have been wondering what it will take to stop the anti-American, anti-freedom, lawless Barack Obama (or whatever his name is), his administration, and the commie weasels in Congress.

As we watch the in-your-face criminal actions of Obama and his minions (the list of which seems interminable), it is clear that members of the other two co-equal branches of the federal government are either in agreement with him or are too scared of the shadowy powers behind Obama to lift a finger against him. This strange, debilitating non-resistance to Obama can't be based solely on the fear of being falsely accused of "racism," so I conclude it is based either on agreement with Obama or fear of something much worse. 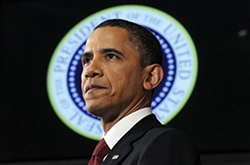 The courts and Congress rarely defy him, and Congress (so far) has proven itself too wimpy to bring articles of impeachment – so who is left with the power to depose this junior tyrant who's occupying our White House?

As I wrote over a year ago, "I believe only God can stop Obama" – intervention contingent on our worthiness as a people. But that's clearly not Obama's thinking, since he appears to consider himself "the one we've been waiting for." Not concerned, therefore, with divine retribution, he sees the United States military as the only real threat to his dictatorial usurpations. So, what has been one of Obama's chief goals since taking office? Destroy the U.S. military, remove the American patriots from it, and replace them with Obama drones – of the human variety.

We are regularly seeing stories of Obama administration outrages toward our military members. The homosexualization of our military is a big one. Obama has already packed his administration with homosexuals, and he has also shoved the radical homosexual agenda onto our military with his successful campaign to remove the 1993 "Don't Ask, Don't Tell" policy, which never should have been put in place to begin with. Our military, from its founding – prior to President Clinton – forbade homosexuals from serving, period. It should have remained that way.

We have seen the repeated evil treatment Obama's underlings have given Christians in the military. We saw military chaplains being threatened with arrest by the Obama administration if they dared to fulfill their duties, or even simply prayed with troops, during the "government shutdown." We have seen Christian troops harassed and even punished if they don't support the sham of homosexual "marriage."

In the latest of a string of similar cases, news broke last week that soldiers attending a briefing at Fort Hood were advised that TEA Party and Christian groups like the American Family Association were "threats" to America and that any soldier who supports such groups could be punished. The Army later backpedaled on the statements, but we know where these military Obamatons stand. Obama clearly hates Christianity and Christians in the military (and anywhere else, for that matter), and he's making sure his people are pushing them out.

Another outrage is the Obama administration's purging of top commanders in the military. Don't tell me "this is old news," because it is ongoing, and it must continue to be made known. Last Wednesday, Glenn Beck's The Blaze news site carried a piece by Sara Carter titled "Blaze Sources: Obama Purging Military Commanders," which outlines disturbing firings this year. Ms. Carter writes:

Nine senior commanding generals have been fired by the Obama administration this year, leading to speculation by active and retired members of the military that a purge of its commanders is underway.

Retired generals and current senior commanders that have spoken with The Blaze say the administration is not only purging the military of commanders they don't agree with, but is striking fear in the hearts of those still serving.

...Retired U.S. Army Maj. Gen. Paul Vallely, an outspoken critic of the Obama administration, said the White House fails to take action or investigate its own, but finds it easy to fire military commanders "who have given their lives for their country."

"Obama will not purge a civilian or political appointee [who has] bought into Obama's ideology," Vallely said. "The White House protects their own. That's why they stalled on the investigation into Fast and Furious, Benghazi and Obamacare. He's intentionally weakening and gutting our military, Pentagon, and reducing us as a superpower, and anyone in the ranks who disagrees or speaks out is being purged."

A Pentagon official who asked to remain nameless because they were not authorized to speak on the matter said even "young officers, down through the ranks have been told not to talk about Obama or the politics of the White House. They are purging everyone and if you want to keep your job – just keep your mouth shut.

Naturally, there will be those who say our troops and officers should not be speaking out against their Commander-in-Chief, that they should just do what they're told without question. But these military members have sworn to uphold and defend the Constitution of the United States of America. At what point should they stand up against the anti-constitutional lawlessness of this administration? Do they have a duty to defend the Obama regime in its criminal behavior? Do they not have a duty to resist it?

I have no doubt that Obama fears a military coup against him and his administration. He knows the U.S. military is likely the only earthly power with the capability of removing him from office. Yes, I know Congress could move to impeach him, but do you see any hint of those people growing the guts to do it? He's not worried about Congress or even the courts stopping him, but he is worried about the military, so he's doing all he can to commandeer it, to squash opposition, to rid it of those pesky patriots, Christians, and any others who might question his communist sensibilities.

Barack Obama desperately needs to be removed from office. While we have certainly had bad presidents in the past, his lawlessness is unprecedented. His disdain for our nation's Constitution is despicable. His disregard for the limit on his power is breathtaking. His systematic deconstruction of our once-free Republic is beyond treasonous. If he is not stopped, then by the end of his current term, his destruction of our freedoms, our economy, and our American way of life will likely be complete.

Again I ask, what will it take to stop Barack Obama?