September 21, 2017
It was a chance encounter at our neighbors' annual summer party in which I was fortunate to meet Thomas E. Simmons. I learned that he's the author of several books, including, "Forgotten Heroes of WWII, Personal Accounts of Ordinary Soldiers, Second Edition." It's a compilation of the stories of fifteen World War II veterans in the European and Pacific theaters, land, sea and air. 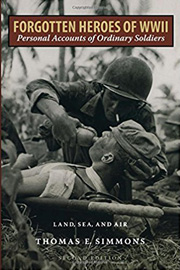 This is not a new book. It was first published in 2002, with the second edition out in 2014, and Mr. Simmons told me that all but a few of the men featured have since passed away. I cannot adequately express how deeply moved I was in reading this book and how strongly I recommend it. With each man's story, I cried. It's an excellent, though brutal, book, and one I wish every American would read, especially the young, who aren't being properly taught our history anymore.

Like many, if not most, war veterans, these men didn't want to talk about their horrific experiences, but as Mr. Simmons wrote in his prologue:

At first, without exception, these men refused to talk about the war... All made similar statements: There's really not much to tell. I was just there like everyone else. All I wanted to do was get home. Each was uncomfortable at being singled out to speak of experiences he felt were common to so many others. Each professed, "It was so long ago I don't remember much."

I was gently persistent, beginning with simple questions. In each case a strange thing happened. Speaking quietly, shyly, honestly, and often painfully, vivid experiences began to flood from bottled-up memories that had been locked away decades ago, locked away because they were painful and because those who were not there, including loved ones, could surely never understand. Once memory's gate was opened, each man spoke with clear recall in remarkable detail.

Each chapter is one man's account, and one chapter is of two men on the same islands in the Pacific. One chapter features entries from the diary of a medic in Japan's imperial army on Saipan. The entries are from the last few terrible and desperate weeks of his life as the Allied forces closed in, and as Mr. Simmons notes, they illustrate, "America faced a determined, fierce, and fanatical enemy on the islands of the Pacific."

Mr. Simmons seamlessly interposes each man's firsthand account with his own extensively researched narrative, which provides context and a great deal of educational and incidental information. While this is a history book, it's unlike any history book I've read. In reading the personal stories these men recount, it's as if we're sitting in the living room with our father or grandfather listening as he transports us with vivid descriptions into the center of the awful action. Those of us who've not seen war cannot remotely comprehend the hell on earth these men and boys endured.

While the men featured in this book are mostly from areas on or near the Mississippi Gulf Coast, there are countless untold stories just like them from World War II veterans all across our nation. These are the tales of the common men and boys who were thrust into the last great and terrible war the United States and her allies entered and won with decisive force. The book is a precious reminder of the dreadfully dear cost of our freedom, freedom that far too many today don't regard – or worse, aggressively work to stifle.

At the very least, we owe these men our remembrance, to learn their stories and thank God Almighty for the mercy He granted to our nation in giving us the victory in World War II. In his epilogue of "Forgotten Heroes of WWII, Personal Accounts of Ordinary Soldiers, Second Edition," Mr. Simmons writes:

Old men now, the surviving veterans of World War II are dying at a rate of more than three hundred thousand a year. Let us not forget what they did, how hard it was for them daily – the physical discomfort, fear, pain and mortal danger – and that they somehow found the strength and courage to prevail in the face of it all. Every American, regardless of age or station in life, and each generation that follows has an obligation, individually and collectively, to make certain that the leadership of America, however imperfect in this imperfect world, nonetheless maintains our nation's strength, moral character, courage, and determination to remain a free republic founded upon individual liberty. We owe nothing less to that quietly departing generation as we ride the freedom they preserved for us into the twenty-first century.

I urge you to order a copy of this book, and read it. Get gift copies for your friends and family. You'll be glad you did.