July 26, 2016
I have a deep concern for those who are warring against the Lord Jesus Christ. I'm speaking of men and women who are spreading a false gospel around the globe, a gospel that saves no one. In Mat. 23, Jesus rebuked false teachers for being full of "hypocrisy and lawlessness." He also referred to them as serpents and a brood of vipers. Ouch!


Beware of false prophets, who come to you in sheep's clothing but inwardly are ravenous wolves. You will recognize them by their fruits. Are grapes gathered from thornbushes, or figs from thistles? So, every healthy tree bears good fruit, but the diseased tree bears bad fruit. A healthy tree cannot bear bad fruit, nor can a diseased tree bear good fruit. Every tree that does not bear good fruit is cut down and thrown into the fire. Thus you will recognize them by their fruits.


Yet "ravenous wolves" are frequently given a platform to reach millions with their rotten fruit through "Christian" events. I'm talking about the events that evangelical patriots attend for the purpose of praying for our nation. Moreover, wolves are given a platform on popular "Christian" news and opinion sites. Sad to say that visitors to some esteemed "Christian" blogs really should seek God's protection before entering. Three such examples are Christianity Today, Christian Post and Christian Today. But by far the worst offenders when it comes to spreading a false gospel are cable stations such as Trinity Broadcasting Network (TBN) and God TV.

During the Republican National Convention, Donald J. Trump allowed a door to be opened for false teachers to impart Word of Faith (WoF) theology to the massive audience in attendance and those watching on TV. WoF, a.k.a. prosperity gospel, name-it-and-claim-it, health and wealth is a theological cult. According to Berean Research:


The world's fastest-growing false religion tells us that our faith is a "force" and the words we speak have the power to create something new. The Word of Faith proponents promise we can obtain health, wealth, success, and more if we simply have enough faith. Biblical Christianity says no. (Source)


So what are God's people to do about this? In 1 Timothy 6:3-5 Paul tells Timothy what he thinks of false teachers:


If anyone teaches a different doctrine and does not agree with the sound words of our Lord Jesus Christ and the teaching that accords with godliness, he is puffed up with conceit and understands nothing. He has an unhealthy craving for controversy and for quarrels about words, which produce envy, dissension, slander, evil suspicions, and constant friction among people who are depraved in mind and deprived of the truth, imagining that godliness is a means of gain.


Those who teach a false doctrine create huge problems in the Church? Yes! And 2,000 years after Paul wrote to Timothy, modern-day wolves "puffed up with conceit" are still around, creating constant friction.

Two people who propagate "teachings of demons" are Paula White, senior pastor of New Destiny Christian Center in Florida and Pastor Mark Burns of Harvest Praise and Worship Center. Both of these individuals were invited to take part in the 2016 Republican National Convention. It's no secret that The Donald has an affinity for affluent prosperity preachers such as White; Joel Osteen calls the mogul a "friend of his ministry." Both White and Burns serve on Trump's "Christian" Advisory Committee that was established to help him win the evangelical vote.

In verse 12 Paul tells Timothy to "fight the good fight of faith." Before that, in 1 Tim. 1:19, he told his friend to hold on "to faith and a good conscience, which some have rejected and thereby shipwrecked their faith."

Could it be any clearer that Bible believing Christians, who are faithful to the teachings of Scripture, are to "out" wolves?

With Donald Trump now in full presidential campaign mode, there is no doubt we'll be hearing more from the woman who is known as Trump's "God whisperer." Thankfully, discernment bloggers have kept us apprised of Paula White's shenanigans (see links below) and why she is considered a serious threat to the Church. So there are many of us who are not in the dark. One discernment blogger, the late Ken Silva of Apprising Ministries, warned the flock about Ms White back in 2012:


Pastrix Paula White has told us that Jakes is as Paul and she as Timothy; she's also revealed that she's Elephant Room 2's T.D. Jakes' Spiritual Daughter. Today she shows us that she's learned well his WF positive confession. 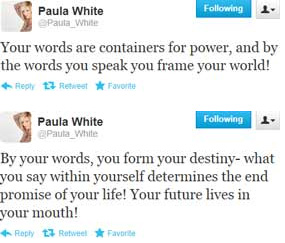 
In another blog post, Ken included a video of Pastrix Paula "preaching the classic Word Faith sow a seed of money so God will be obligated to bless you." Furthermore, says Ken, "she's doing it for her spiritual father T.D. Jakes at his Potter's House in December of 2010." He included a video that can be viewed here. (Scroll down toward the bottom of the page. Directly below White's video is another video that shows modalist T.D. Jakes selling WoF snake oil to the crowd, if you can stomach watching it.)

Paula White denies that she teaches the prosperity gospel but the videos and her tweets say otherwise. I have combed the web and was unable to come up with anything that indicates White no longer teaches WoF heresy. Moreover, there isn't any indication that she has admitted her sin, repented, and turned from it.

As if all this isn't bad enough, Paula White also claims the title of pastor and in so doing she is disobeying the command of God:


A woman should learn in quietness and full submission. I do not permit a woman to teach or to assume authority over a man; she must be quiet. For Adam was formed first, then Eve. And Adam was not the one deceived; it was the woman who was deceived and became a sinner. (1 Tim 2:11-14)


So you see that Paul plainly taught that women are not to be in a position of authority over men within the Church.

Since space does not allow for the details of Paula White's heretical teaching, research links will have to suffice. Several links are included below. Now to Mark Burns...

The man who has been dubbed "Donald Trump's pastor" made headlines by delivering "the most partisan prayer in convention history." What did Rev. Burns say that was so controversial? He referred to Democrats as the enemy and called on the Almighty to defeat Hillary Clinton. (Watch Burn's prayer on YouTube)

In a piece for TIME entitled "Meet the Evangelical Outsiders Who Are Flocking to the Republican's Campaign" Elizabeth Dias observed:


At a March Trump rally in Illinois, Burns leapt up to the stage, pumping up the crowd in chants of Trump's name. "Lord, this will be the greatest Tuesday that ever existed, come Super Tuesday Three," he prophesied in prayer, naming and claiming a Trump victory. He opened his eyes. "There is no black person, there is no white person, there is no yellow person, there is no red person, there's only green people!" he shouted. "Green is money! Green are jobs!!"

Until Trump plucked Burns out of the tiny town of Easley, S.C., few Christians knew the black pastor's name. But it is God, Burns says, who has economically transformed his life – before he found Jesus, he relied on food stamps, lived in section 8 housing, went to jail, and faced a charge of simple assault as part of his self-described "baby mama drama" past. Then last year, Burns decided to transition his ministry to a for-profit televangelism business, so he and his followers could achieve economic success.

"Jesus said, above all things, I pray that you prosper, I pray that you have life more abundantly," Burns, 36, explained to TIME in an interview, quoting a verse not from the Gospels but another New Testament passage. "It was never Jesus' intention for us to be broke." All of this is wisdom is now contained in a candidate for President. "I think that is what Donald Trump represents," Burns says.

Trump is making inroads in the evangelical world by cloaking himself with pastors like Burns, who represent a narrow and often controversial segment of the faith. The preachers who often stand with him are born-again Christians, but most are evangelical outsiders – many are Pentecostal televangelists who often preach a version of what's often called the "prosperity gospel," a controversial theological belief that God wants people to be wealthy and healthy.


Dias states in her closing remarks:


Burns meanwhile is praying Trump's way to victory. He started an #IPrayedForTrump hashtag and leads phone conference calls for followers to pray over Trump when he speaks. He says 10,000 people have joined for a five-minute prayer. Ultimately, Burns hopes Trump will help his hometown. "I fantasize about bringing a company like Microsoft to Easley, to bring car manufactures to Greenville, to create more and more jobs," he says. "You need people like the Trump family to learn."


As for the rich in this present age, charge them not to be haughty, nor to set their hopes on the uncertainty of riches, but on God, who richly provides us with everything to enjoy. They are to do good, to be rich in good works, to be generous and ready to share, thus storing up treasure for themselves as a good foundation for the future, so that they may take hold of that which is truly life.

O Timothy, guard the deposit entrusted to you. Avoid the irreverent babble and contradictions of what is falsely called "knowledge," for by professing it some have swerved from the faith.


Paul appeals to Timothy to guard the deposit which God had entrusted to him "by avoiding the empty speculations of the false teachers, who claimed to have knowledge, but didn't know what they were talking about. This brings him full circle back to the warnings of chapter one. Paul meant the deposit of the gospel as well as the spiritual gifts Timothy had been given." (Source)

Setting hopes on the uncertainty of riches:

Put no trust in extortion; set no vain hopes on robbery; if riches increase, set not your heart on them.

Whoever trusts in his riches will fall, but the righteous will flourish like a green leaf.

When your eyes light on it, it is gone, for suddenly it sprouts wings, flying like an eagle toward heaven.

WF Pastrix Paula White: As Paul is to Timothy T.D. Jakes is to me – Ken Silva

Should Christians hold prayer vigils with apostates? By Marsha West

Marsha West is the owner and managing editor of Christian Research Network (CRN), On Solid Rock Resources, and Apprising Ministries. She is also co-founder of Berean Research.

For many years Marsha was a regular contributor to several popular blogs but now writes exclusively for CRN and Renew America. Her articles have been translated into many languages and distributed worldwide.

September 1, 2021
Bethel Church’s new megabuck megastructure will model ‘on earth as it is in heaven’

June 30, 2021
Is God really the one behind ‘The Chosen,’ as the creator of the series declares?

May 21, 2021
Blood Moons: Prophets who persist in prophesying falsely

May 14, 2021
Christian publishing houses are advancing the apostasy pandemic in the Church

April 21, 2021
The mainstreaming of neo-Gnosticism In Evangelicalism

March 12, 2021
Who or what is the force that drives the Left to cancel conservatives?

February 16, 2021
Shockingly, many Christians think nothing of using satanic practices to ‘experience God in a powerful way’