An open letter to the hierarchy of the LDS church 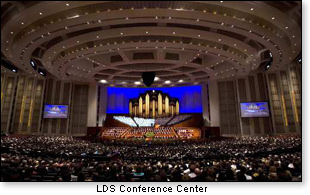 To the members of the hierarchy of the Church of Jesus Christ of Latter-day Saints,

I find myself writing on behalf of Stephen Stone for several reasons, not the least of which is that I am dismayed that you have a hierarchy that allows man to rule over man, and allows some to dictate to others when they have not the authority to do so.

(For background regarding my concerns, see "That's what families are for"; "Spiritual murder: allegations of wrongdoing by the LDS church"; and "In the world, but not of it" at RenewAmerica.com.)

As a member of the Jewish faith, permit me to explain that Judaism, the oldest monotheistic religion, is intentionally non-hierarchical because of the awareness of man's behavior once he's given a shred of self-importance. The rabbis who hold services in the local synagogues are not God-ordained priests, but are retained by and beholden to their congregants, and all worshippers may approach God directly and live their lives without an intermediary. Although they may be guided by God's Torah and assisted and comforted by man, they answer only to God. The laws of Judaism were given by God directly to the people and apply to all equally. For the same reason, the United States has no king, but a president with limited powers and tenure and a means of checks and balances.

What I see in religions such as yours, with its hierarchical authority, are men who are too easily tempted to exercise power over others in the name of God, and that, sirs, is what destroys people, religions, and countries.

I became a political writer when I retired, when I became more aware than ever of the iniquities in our world. In our own government administration, I have come to recognize the spread of un-American "ethics," the falling away from our Judeo-Christian heritage, and the almost fascist or communist qualities that have been adopted. I see our administration's intent to bring us to such ruin as their way of equalizing people worldwide – in keeping with Obama's hate of colonialism, and his not realizing that we can bring people up without having to bring others down as a consequence!

I see these same characteristics in your policies, where you have deigned to control a congregant and demand he live and run his business in accordance with your own personal preferences. Not only is this unethical and immoral, but by attempting to control the Stone family's political interests, you are thus ineligible for tax-exempt status. Therefore it is also illegal.

I have called into question similar wrongdoing by the Presbyterian church, and question the "600 rabbis" of the Reform movement, who are ignorant of encroaching Islamism and communism on our society, which are eating away at our democracy and intentionally bringing us to financial ruin. In their complete denial, these rabbis work and vote as they wish, but they are not to direct their adherents on how to deal with their businesses, their elections, or chosen candidates. Their job is to help their congregants in time of need, to guide according to the Torah, and to teach compassion.

My dedication to righteousness and justice does not permit me to condone the position of the LDS church in the political arena; neither can I look away from the intimidation and harassment that Mr. Stone has endured because of people who seek to supplant God. Your behavior has caused great suffering to a member of your church. You have neither legal nor heavenly authority to intimidate him into living his life and earning his living as you choose – or to dictate whom he may support in the American election system. He is doing what he can to save our Constitution and our Republic, and I admire his efforts and his love of our United States of America. To me, your shunning is a severe form of abuse and torture, and the epitome of sinfulness, for you have taken on a role not God-ordained, but totalitarian and harmful in its method of governance.

The Archbishop of Canterbury, whether out of ignorance or arrogance, has allowed Islamic sharia law to be accepted into English law, for which England will forever suffer. You should be expressing your gratitude to your own congregant who has stood up in the face of adversity, who is learned enough to recognize what our country faces today, and who is willing and able to fight for the survival of our Constitutional Republic. You should be immersing yourselves in the information he can share, if for no other reason than to try to grasp what he hopes to accomplish and why. Whether you ultimately agree or disagree, you should be at least fair – and you and your church owe him a full apology for your arrogance and despotism. His membership in your church did not give you ownership over his existence.

I am familiar with some of the LDS history, when you have oft-times strayed from courtesy and morality by implementing your own logic to do ill and spite to others. Your history of autocracy and inflexibility are well known to the outside world, and just two of the reasons people feared the Republican candidate!

I am astounded that Stephen Stone is striving amicably to resolve your persecution of him and his family despite the actions taken by your hierarchy; I have known people who have left their churches for far less. I ask that you accept the differences in people and learn to respect them, and allow them to live their political and professional lives unimpeded by the pettiness of their co-religionists. In the eyes of God, you are all equal, although Mr. Stone has proven himself to be far more honorable than yourselves.

In The Time of Your Life, William Saroyan wrote, "In the time of your life, live – so that in that wondrous time you shall not add to the misery and sorrow of the world." He added, "Be the inferior of no man, or of any men be superior.... Despise evil and ungodliness [but] have no shame in being kindly and gentle."

If Mr. Stone does not abandon his interest in your church, as I would heartily recommend, then I hope I have been instrumental in causing the church elders to think seriously of how you continue to conduct yourselves and whether you have learned to show compassion to others.