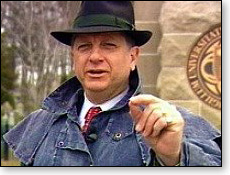 When Randall Terry, founder of Operation Rescue, and perhaps the premiere culture warrior in the crusade against abortion, says that Fr. Jenkins' invitation (and Barack Obama's acceptance) to give the commencement speech at the University of Notre Dame instantly made South Bend ground zero in the battle against abortion, it's impossible for a former Golden Domer to not stand up and take notice. And, since this most illustrious advocate of the unborn is adamant that you can't wage this war solely in cyberspace, I hopped a train to his Tuesday protest in Chicago to personally see exactly what break-Barack and jinks-Jenkins strategy the master had in mind.

Of course, it's fashionable to call the man whose life has been threatened, who has been imprisoned, and has lost his house, money and "even my frequent flyer miles!" due to his pro-life efforts, "controversial," but that's just another mainstream media myth. For example, Terry's arranging to have an aborted fetus shipped to Bill Clinton at the 1992 Democratic Convention was not terroristic but patriotic, and his recent "Resignation Letter of Rev. John I. Jenkins CSC," is not impertinent but polite, for, since it requires only the busy president's signature, it will save the harried priest time in both composing and typing.

But seriously, it would initially seem to the outside observer (as well as to THE Observer, the ND student newspaper) that Tuesday's protests were not among Randall's shining moments. First, only half a hundred anti-abortion backers showed for the 'Stop Obama at Notre Dame' downtown demonstration in front of the office of Notre Dame's chairman of the board, Richard C. Notebaert. And, to top it off, Notebaert didn't even deem us (by now I had picked up a sign myself) noteworthy enough to deal with in person, instead saying through a spokesman that not only was the "Baert Man" not there, but he had moved his office to another location!

Whether Notebaert's front man was truthful or not was debatable, but in any event, we moved on to our next protest destiny, the headquarters of Aztech Foods, where its president (and Notre Dame trustee), Arthur R. Velasquez, resided. And, despite the fact that only thirteen of us (Terry and his twelve apostles of protest?) made the trek to this extreme outpost of the Windy City, Randall said this trip was our most fruitful, as Velasquez turned out to be a real pro-lifer himself, and now promised us to do everything he could within the Board to promote our position. "At least we now have one of them on our side!" exclaimed Terry, and, after praising God for our victory, turned his attention to me.

"Tom O'Toole, Notre Dame Class of '81!" I said to Terry while reaching to shake his hand.

"The 'POPE Project' guy?" asked Terry, getting right to the point.

"And 'Fighting Irish Thomas' too!" I added, as only a starving Catholic author can.

"I ... hey, walk with me to the car," said Terry, killing two birds with one stone. "Tom, I need a connection on campus ... do you know any students who will fight this thing, who will work to keep Obama from coming?"

"What about ______ or _________ ?" I asked, naming several students involved in NDResponse, the official student anti-Obama protest group.

"No," said Terry, shaking his head. "All they're asking is that Obama not get an honorary degree," he added. "Basically, they've already caved in to what the administration wants. I need someone who will stand up and fight, who will do more than just have a friendly discussion."

I thought about the first chapter in Terry's prophetic book A Humble Plea, in which he told a futuristic tale where the opposition was now killing not babies, but bishops. One mild-mannered bishop, the next to be knocked off, is given a Dickensesque view of what the reaction to his killing will be. To his horror, his parishioners dismiss the frenzied member who holds up his former leader's bloody picture and exhorts about "bishop killing" and "murder," and instead approves of the message of the calm, tastefully dressed woman who says a short prayer and passes out a "Bishop's Untimely Removal Pin" to everyone as the solution. "So Randall wants fighters, not 'BURPers,'" I thought to myself.

"Yes, just as a war needs nurses and ammunition makers, we need people who petition and pray," Terry continued, "but for this war to succeed, we need someone on the front lines who is not afraid of battle. If you could get me even one student who could go between us and the other students ... I know we can win."

Well, students of Our Lady, you heard the man. According to Coach Terry, we have plenty of fans and cheerleaders ... and even a few players on the bench. If you have the courage to go over the middle against Obama, or the zeal to run down the field to stop Jenkins, then you are the man  or woman  Coach is looking for. For now is not merely the moment to honor our school's Name. It is time to live up to Her nickname as well.

If any Notre Dame students would like to work with Mr. Terry, please contact me  or his office ASAP. Of course, comments or volunteers from the alums or "subway alumni" are welcome too!