"I've got to go, Rock. It's all right, I'm not afraid. But sometime when the team is up against it...and the breaks are beating the boys...tell them to win just one for the Gipper. I don't know where I'll be then Rock, but I'll know about it, and I'll be happy." — George Gipp's deathbed speech

Last week, on the 90th anniversary of Notre Dame football legend George Gipp's death (Gipp died December 14th, 1920, of pneumonia), I was reflecting, in the aftermath of young Declan Sullivan's tragic recent death and the tributes that accompanied it, on the lack of official recognition the athlete that even Notre Dame's official (and politically correct) athletic website calls "perhaps the greatest all-around player in college history" has around the campus. And, in my typical politically incorrect (but Catholic) manner, I was wondering if we could kill two birds with one stone by erecting two stones with one politically incorrect, but very Catholic, theme...

For the uninitiated, George Gipp, whom Rockne called "better than [Jim] Thorpe or [Red] Grange," was perhaps not only the greatest college football player, but the greatest college athlete ever. What can one say about an Irish legend who rushed and passed for over 4,000 yards and returned kicks and punts for another 4,100...but never played football before entering Notre Dame? A player who once drop-kicked a record 62-yard field goal to win a game and never allowed a completed pass as a defensive back — but came to Notre Dame on a baseball scholarship? And yet, the player whom Rockne called the "perfect performer who comes once in a generation" and who led Rock's 1919 and 1920 Irish squads to two undefeated seasons, outscoring opponents 560-27 along the way, never quite got the pub this record seemed to deserve. Of course, some would argue that his tragic untimely death from strep throat at the age of twenty-five made him even more immortal, a kind of football version of A.E. Housman's "To An Athlete Dying Young." Combine this tale with Rockne's shocking death in a plane crash ten years later, and you have the makings of a Shakespearean saga that, future "Faustian" jousts notwithstanding, would forever put Notre Dame football on the map. Still, in Gipp's unique case, something is missing on campus; a tribute not to the legend but the legacy.

Indeed, George was, as Irish alum and famed sportswriter Francis Wallace noted, "a most peculiar kind of saint." Besides being a great athlete and a Hall of Fame football player (and universally admired and respected by his teammates for both his leadership and competitiveness), Gipp was a notoriously good pool hustler and an incredible card shark as well. His annual income from gambling during his college days, including betting on Notre Dame games (let the record show, he always bet on the Irish to win!) was conservatively estimated at $5,000, a figure easily topping $100,000 in today's terms. At most, Gipp made gridiron practice three times a week, and attended classes even less; he was actually temporarily expelled from Notre Dame his junior year until Rockne pleaded with the priests to at least let Gipp take the final exams — which he passed with flying colors virtually without studying. Maybe nothing sums up the unusual place Gipp has in Irish lore than a conversation Rockne had with his prodigy during half time of the 1920 Army-Notre Dame game. After dressing down his charges for their poor defensive play, Rockne turned to Gipp, who had just finished a long drag from his cigarette.

Rockne: "What about you? I don't suppose you have any interest in this game."

Gipp: "Look Rock, I've got four-hundred dollars bet on this game, so I'm not about to blow it." [The Irish won, of course.]

Although Gipp was recently named to ESPN's list of the top twenty-five college players of all time, it's a sure bet Gipp's betting couldn't have survived the scrutiny of today's sports media. Likewise, his lifestyle (besides gambling, George lived off-campus and unlike his contemporaries at the then all-male school, wasn't exactly shy about his relationships with the ladies) probably isn't something the current PC administration is proud of. But if the current fashion is to deny his deathbed speech (saying the story must be false since George never previously called himself the "Gipper" is like saying the frequently quipping Gipp was always deadly serious) a more curious denial is the University's recent silence (despite the claims of then University president Matthew Walsh, Father Patrick Haggerty, and Rockne himself, all of whom were there with Gipp at or near the end) on the subject of Gipp's last-minute conversion to Catholicism.

Since Gipp's parents were devout (and very anti-Catholic) Baptists, they felt, having not witnessed it themselves, that the whole conversion story must have been faked, or at best George "converted" when he was delirious with fever. The plaque containing his "Gipper" speech (in the Notre Dame locker room) notwithstanding, it was said his relatives were so furious with the conversion account that they (fearing a Catholic Gipp inscription) threatened retribution against Notre Dame if they built a campus monument to their son, a warning the University has heeded to this very day.

Which brings us back to Declan. True, Dec wasn't a famous athlete, but there is no denying his death also left a deep impression on his classmates (every single teary-eyed Notre Dame student attended Gipp's Sacred Heart funeral mass, and the students overflowed out of the Basilica and filled the quad and Student Center during Declan's Mass as well) and in the future his life will also always be linked to Notre Dame football. Indeed, both of their deaths can in some way be directly attributed to the program; although the team didn't realize it at the time, Gipp's strep, which in the days before penicillin could lead to death, was perhaps irrevocably aggravated when the already ill Gipper sat blanketless on the cold bench during the freezing season finale at Northwestern, and Declan's death could have been prevented if the University had heeded the National Weather Service's high wind warnings for the area and had grounded the camera lift for that day. Thus Declan, like the Gipper, should be permanently immortalized on campus — but in a Catholic way. Some have mentioned naming a street for Sullivan, but streets, like decals or plaques, aren't nearly enough. Catholics should be remembered with statues, and no one does statues better than Notre Dame. 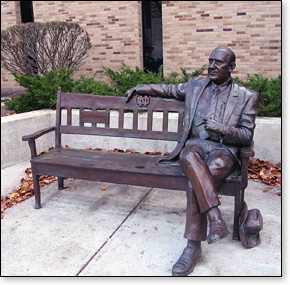 Besides the countless statues of Christ and Mary, the saints and the University founding fathers, there are now statues near the stadium of the many great Irish football coaches including Rockne, Leahy, Parseghian and Holtz. There's even a statue of the former popular athletic director, Edward "Moose" Krause, sitting on a bench in front of the basketball stadium smoking his trademark cigar. I like this pose, so in keeping with the sitting (and smoking) theme I propose putting a statue of Gipp and one of Declan sitting at opposite ends of the student section in the Notre Dame Stadium stands. That way, the students will always be surrounded by them, and the players will always look up to them (along with the Lady on the Dome) when they sing the Alma Mater. On the right will be the statue of Gipp, in one hand his irreverent halftime cigarette, the other reverently clutching a rosary like Bernadette did in the Grotto. On the left we'll find Sullivan, simultaneously texting his off-beat tweets while adjusting his scapular/Miraculous Medal necklace.

Yes, I know that despite their many acts of kindness while upon this earth (Declan was very generous with both his time and talent during his days at the Observer and the Gipper was known to give without fanfare great sums of his gambling winnings to South Bend widows or students behind on tuition) neither was given much to sacramentals during their stay here. These monuments are instead meant to depict the timeless, time-lapse style of Catholic art, such as the Infant of Prague already dressed as a King, or the Baby Jesus clutching the Eucharist; the before and after if you will. Gipper and Sullivan's humor wasn't always holy then, but it is so now, and by depicting them as not just "nice," which indeed they sometimes weren't, but Catholic, the University will be taking great strides toward the day when it will again be Catholic too.