January 14, 2011
"It is proper for the noblest hearts to discover the most urgent need of their epoch and to consecrate themselves to it." — Father Lacordaire, a famous French priest quoted by Father Euteneuer in the introduction of his book Demonic Abortion

"Sidewalk counselor: 'You can't go to heaven unrepentant, George; you are going to Hell.' Abortionist George Tiller: 'Abortion is worth going to Hell for.'" — from Demonic Abortion (pg. 82) 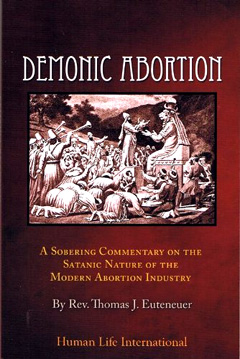 Commenting on the above quote by Lacordaire, the Rev. Thomas J. Euteneuer, former [my emphasis] president of Human Life International, perfectly sums up the purpose of both his powerful "little book" Demonic Abortion and his provocative pro-life ministry in saying, "There is little doubt that many of those who strive for holiness today will consecrate themselves to the most urgent need of our epoch: namely, putting an end to the wholesale slaughter of the innocents by modern day Herods and Pharaohs" (pg. 1). And, despite its modest length of a mere 120 pages, there can be little doubt that "this manual," which, according to Euteneuer, "is meant to wake people up and call them to the battle to save lives and souls" (pg. 1), has done its work well. Indeed, perhaps too well; for months after DA was released last year, Euteneuer mysteriously resigned from HLI, leaving many of his baffled pro-life fans to wonder if his latest book would also be his last.

Showing how being "pro-choice" is not a mere political opinion but in fact a worldview; one which John Paul II dubbed "the culture of death," Euteneuer then demonstrates how the "unholy trinity" of "contraception, comprehensive sex education and abortion" has undermined (and in some places killed) our traditional views on "life, marriage and family" (pg. 15).

"Passing from the idea that a child is an 'inconvenience' (contraception) to the idea that a child is 'irresponsible' (sex education) to the idea that the child is a 'problem' or 'crisis' that can only be solved by abortion is the slippery slope that the devil has created...a diabolically clever strategy...that subvert[s] everything God [made] sacred and is, in essence, 'another gospel' (Gal 1:6-7) entirely opposite the Gospel of Jesus Christ" (pg. 17). As for those Protestant brothers and sisters who are not quite convinced of the evil identity of the first person of the "unholy trinity," I would ask you to pay special attention to Euteneuer's discussion on contraception, which he calls a "gateway drug" to abortion. By "dividing the unitive and procreative dimensions of the marital act...contraception [drives] a demonic wedge into marriage...[not only] dividing...flesh and spirit...parents and children...husband and wife," but also dividing "family and society" by which it has led to the widespread acceptance of the most contraceptive (non-procreative) union of all; namely gay "marriage" (pg. 42).

Perhaps what amazes me most about the 21st century disciples of the pro-choice gospel is that, unlike when I was a kid and the official Planned Parenthood party line was that the unborn were just a bunch of cells so abortion wasn't the taking of a life, Euteneuer shows in DA that most current abortionists and their accomplices not only accept the ultrasound's proof that the fetus is a child when they murder it, but revel in the fact that they (as opposed to God) now have the power over life and death. Euteneuer quotes from a vast assortment of child-sacrificers, each one seemingly more demonic than the other. His infamous list includes Patricia Baird (former owner of three abortion clinics) who states, "Abortion is a major blessing...a sacrament [where] some women have an abortion out of love for the baby (pg. 87); Tess Kolney (of the Gaian activist Church of All Worlds) who contends, "The issues [the] control freaks bring up — Is the fetus alive? — Is it morally right to kill? — are non-issues...there's [not] even a question for most of us that life is life, fully divine. The issue is...Are we willing to [let] anyone else interfere with our choices as Mother/Goddess?..." (pg. 88), and finally, Ginette Paris (from her book The Sacrament of Abortion), "When my turn came, I stretched out on the table...[and] let my little darling go...occasionally...it is necessary to sacrifice the fetus to a higher cause...[a]bortion as a sacrifice to Artemis" (pg.90).

But as grisly as these girls are, in my book (and Father's) the soul who takes the "abortion celebration" cake is none other than that former champion baby-chopper, George "The Killer" Tiller. Not only did his website advertise your choice of "viewing, holding, and photographs or even Baptism [something Euteneuer stresses is demonic] of your baby after the delivery" (a.k.a. the abortion), but went so far as to include a "two to three hour bonding session with the baby" (aborted fetus) option (pg. 95). One can't imagine those photos of late-term (Tiller's specialty) skull-crushed victims to be very pretty, but they say beauty is in the eye of the beholder, and if Tiller was truly willing to go to hell for his craft, I guess that's the only place where such art is really appreciated.

Speaking of art, maybe the best comparison would be that, for the Christian, reading Euteneuer's Demonic Abortion is like viewing Mel Gibson's Passion of the Christ; although you know ahead of time what it is about (or even how it will eventually end) witnessing such a comprehensive, compelling display of Good suffering at the hands of Evil in such a short time is both a gut-wrenching and evangelization-spurring experience. If reading about how all the pro-choicers celebrated abortion could be likened to watching Jesus suffering on the Way of the Cross, then reading about how Yale art student Aliza Schvarts used the blood of her two aborted babies she conceived through self-insemination and then killed with the RU-486 pill (pg. 49) to paint her senior art project could be compared to Jesus being scourged at the pillar. And yet, as harrowing as those scenes were toward my soul, Euteneuer's following abortion victimization account remains for me his book's crucifixion scene:

"Before [the abortion] was done I thought of it as my 'right' and really did not think of it as wrong, but when they started the process I knew I had touched on something really evil. I asked them to stop but they said 'No,' and the nurse held me down while the doctor did it...I tried to scream...but no one even cared. It felt like a rape by the devil. I have nightmares about it...I hate myself for it. Will it ever go away?" (pg. 75).

But as much as I was touched by Demonic Abortion, it truly pains me to recommend a book that is currently not available. Since dismissing Euteneuer last September, Human Life International has refused to reissue any of Father's books, and a paperback copy of Demonic Abortion is currently going on the Amazon black market for over one-hundred-fifty dollars. Although HLI did not give a separate reason for pulling the plug on DA, their Facebook rationale for stopping the presses on additional copies of Father's most famous book, Exorcism and the Church Militant (of which DA is a sort of sequel), "[we are] not experts on, or promoters of, exorcisms," seems disingenuous at best. Not only does the HLI staff praise DA as "the fruit of many years of prayer in front of abortion centers in the US and abroad" on the book's jacket cover, but they endorse Euteneuer's performing of and informing about exorcisms as "a natural outgrowth of his work in the pro-life field." On the surface, removing the media-savvy Euteneuer from HLI president back to assist at a small parish would be like taking Archbishop Fulton Sheen off of his Life is Worth Living TV show during its heyday and putting him to work in Podunk; it makes a mockery of the man's God-given gifts. If, on the other hand, Euteneuer has fallen a la Gibson (a source close to Euteneuer, speaking on the condition of anonymity, told me that "Father Tom is, sad to say, in a serious situation of his own doing and may not be returning to public ministry"), his followers deserve a better explanation than a half-truthful cover-up. But whether Euteneuer's fallout with HLI was major or minor, these transgressions no more diminish the insight of Demonic Abortion than Gibson's sins could dim the power of the Passion of the Christ, and these books should not be blackballed.

In the final chapter of Demonic Abortion, Fr. Euteneuer called abortion "a huge spiritual vortex of sin, pulling people into it," and although we pray it not the case, considering his superiors' profound hush on the subject, it's not hard to not at least wonder if this frontline battler of spiritual demons has slipped up and gotten sucked down into its evil. Ironically, this also makes Euteneuer's closing statement, that most of the Church's sins relating to abortion are "sins of omission [due to their] terrible silence on this topic" (pg. 112) even more prophetic. Silencing Euteneuer's words can only compound his alleged sin, whereas publishing his warnings not only gives The Church Militant the battle plan to fight "the evil of our epoch," but may force Euteneuer to confront — and conquer — his own demons as well.