Tom O'Toole
Corapi corrupted part II: the curious court case and the lie of "lying down"

It's almost always wrong for a cleric to sue a congregant. It's especially wrong when a priest sues someone who is making sexual misconduct allegations against him. — David Clohessy, Director of SNAP, the Survivors Network of those Abused by Priests

1. I can quietly lie down and die, or 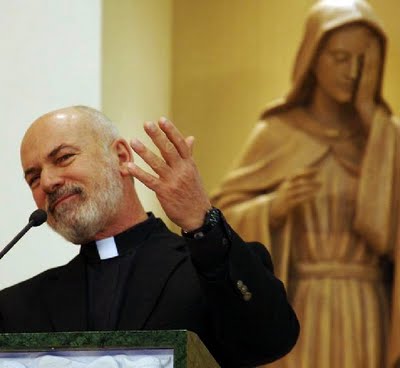 Fr. John Corapi
As the important secular 4th of July holiday (and important Catholic Feasts of the Sacred and Immaculate Hearts) approaches, we find John Corapi, aka "The Black Sheep Dog," continuing his uneven quest for relevance (if not reverence) vacillating between being a renegade Catholic preacher and a Fox News reporter. Still, there looms in John's past a couple of pertinent questions that must be answered before his future can truly be resolved. The first involves the curious court case he brought against his accuser, and the second concerns the "deadly" statement he made in leaving his priestly ministry. In other words, the age old struggle between fame and humility, faith versus fate.

SNAP Director David Clohessy's above statement about priests suing victims is true enough, and it's doubtful that even Corapi's lawyers would contest David's follow-up point that "[t]his woman didn't 'go public'...seek money...file a lawsuit [or] call journalists...[but] simply wrote a letter to a few Catholic officials, reporting...the wrongdoing." The problem is that although Clohessy may be morally right that "this woman" should not have gotten "hit with a lawsuit by a man who allegedly represents Christ," Corapi could very well hold the legal upper hand, since, taking a cue from the queen of media (Oprah) rather than the Queen of Heaven, Corapi paid this woman a goodly sum of hush money to stay quiet about Santa Cruz Media's internal matters when he fired her, and her disclosures of such alleged consensual acts after signing such a waver could easily be construed in court as "breach of contract."

To me, the most astounding thing about the lawsuit is the lurid details Corapi decides to include, details that, while showing she is not exactly a saint, do not do him any favors either. For example, the brief argues that "[her] Letter contained numerous false, malicious and unprivileged statements about Corapi including...Corapi met [her] when she was sent to meet him by an escort service whom Corapi had contacted; Corapi was a regular drug purchaser and user who...did drugs with [her] and...three of her sisters; Corapi engaged in sexual acts and sexual intercourse with [her and] ... one of [her] sisters; Corapi punched [her] in the face; and Corapi currently has a 'new mistress.'" Call me naive, but would a woman make up a bunch of not only embarrassing but illegal details such as doing drugs and being involved in an escort service; activities for which she herself could be jailed, if the rest of the story wasn't true as well? Of course, it could be that Corapi just happened to be driving through the bad part of town when he spied the sad sisters and, out of the goodness of his heart, hired one and left a care package of cash and his tapes on the Catechism for the others. Later, he reluctantly had to let the lead sister go from his employment after he finds her repeatedly raiding the liquor cabinet, which he kept only for the benefit of his many generous Catholic benefactors.

But even if the latter is somehow proved true, and the court case cleans Corapi up both morally and financially, there is still the immoral mantra Corapi keeps repeating since he left the active priesthood, a false choice he offers his followers that must be exposed. In the above salvo taken from Corapi's first "Black Sheep Dog" statement, Corapi lists his only choices as lying down to die (as a practicing priest) or going on to fulfilling work as a non-practicing one. A week later, in slightly harsher terms, "1. Crawl under a rock and quietly die; or 2. Don't crawl under the rock and don't die. I feel that I still have something to offer," Corapi again lists the active (if somewhat secular) life versus a sort of spiritual euthanasia as his only two options, completely ignoring the choice offered by his SOLT superior — and Christ. "We wanted him to come back to the community," said SOLT spokesman Father Gerard Sheehan, where they could support Corapi "pastorally and charitably, taking steps to clear his good name." But "it would have been a drastic change for him...[it] would have meant giving up everything he has." Like the Rich Young Man in the Gospel (Matt 19:16-22), Corapi, the Rich Old Man, could not do this, but unlike his biblical parallel he compounds the problem by pretending this option, not living under "a rock" but "the Rock" of Peter, wasn't even offered. It is said by all three synoptic writers that the Rich Young Man went away sad. But it will be far sadder if Corapi convinces his followers that his selfish choice will make them happy.