I have never had promiscuous or even inappropriate relations with her...I never paid anyone off to remain silent...I resigned because the process used by the Church is grossly unjust and...immoral...I [will not] commit to the suggestion of the Society [to] essentially crawl under a rock and wait to die. — John "Black Sheep Dog" Corapi, from his latest statement.

What would it matter if, for the sake of greater good and the Christian Church, one were to tell a good, boldface lie? — Martin Luther 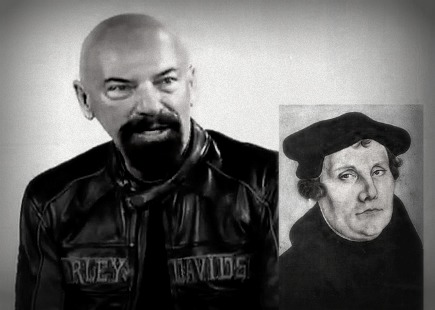 John Corapi and Martin Luther
While only the avid readers of the "Corapi corrupted" saga might immediately grasp the boldness and baldness of the lies on BS-Dog's latest blog, any ten-year-old can tell you that the Corapi statement of his innocence and SOLT's statement of his guilt both cannot be true. Like Luther's tract on the sacraments versus the teachings of Luther's one-time hero Augustine, they are simply incompatible, and you must choose one or the other. What is becoming increasingly apparent is that the "Church" championed by the Society of Our Lady and its famous former member (and his followers) might soon be different from each other too.

Corapi's five denials of SOLT's charges, while two more than Peter's three denials of Christ, are still ninety less than Martin Luther's Ninety-Five ["Trick-or-Treat"] Theses, so we (or any ten-year-old) can easily examine their contents. Now, on Corapi's refutation of SOLT's first charge, that the former Father violated his perpetual vow of poverty, we have to concede Corapi at least one point. "At every step of the way," maintains Corapi, "through the entire past twenty years, the Society of Our Lady's leadership knew of my financial independence," so why didn't they say something sooner? Few, and even I suspect Corapi himself, would describe a man owning over a million dollars in land, along with several nice cars, boats and motorcycles, not to mention a prosperous media company as living in poverty, but because he was living so long and openly in luxury, I (and many others) were extremely surprised he was bound by this vow. As Father Joe Jenkins said on his holy site, Blogger Priest, "I think that the leadership in SOLT must be faulted for allowing this situation to grow so out of hand. They should have reigned him in years ago. Their passivity has now made for a far worse and more scandalous situation."

Although Corapi's situation reminds me much of the downfall of Fr. Thomas Euteneuer, the exorcist priest who roamed the country abusing women until the outcry of the abused (with the help of the Catholic press) forced his bishop to put a stop to it, it is probably more similar (according to Phil Lawler of Catholic Culture) to the case of the late Father Marcial Maciel. "Like...the disgraced founder of the Legion of Christ, John Corapi has worked for years as a celebrity priest: encouraging a cult of personality, setting his own agenda, raising large sums of money that he spent at his own discretion, and — most dangerous of all — accountable to no one. It was a formula for disaster, and now the disaster has occurred. Again." If Corapi's choice words, "I set up my mission as any savvy businessman [as opposed to 'any holy priest'] would," don't strike you as a contradiction, the complaints on his June 20 rant should give you a better indication of his "Macielian" character. When Corapi moans here that "the Church never fed or clothed me, never lifted a finger to pay my $100,000 medical or $300,000 legal bills," when he chose to live apart from SOLT and was not exactly "sharing in common" his considerable financial empire with the community, we can only marvel at how shallow he sounds masking his greed as grace.

Speaking of greed, the BS-Dog's defense of SOLT's most detailed charge, that of sexual impropriety, is by contrast Corapi's shortest and vaguest. Corapi's one sentence statement, "I have never had any promiscuous or even inappropriate relations with her," is so legally nondescript it could mean he did or did not do almost anything to any woman on the planet. By "her," you're led to believe he's talking about his ex-prostitute, ex-employee and current accuser, but by using just the pronoun Corapi could very well say in court he was merely talking about his mother. Also, when speaking morally, a Catholic priest having sex with anyone is a mortal sin, but speaking legally (at least in a state where prostitution is legal) having sex with a prostitute is the whole point of the encounter, as appropriate as a kid in a candy store purchasing (and eating) a Snickers. And notice that Corapi didn't even touch the "sexting" charge, for not only did the Weiner case show that it is a lot easier for the defense to prove sexting than sex, but there are very few situations outside of marriage where even the smooth-talking Corapi could call sexting proper.

But if Corapi's sex defense is purposely misleading, his claim to have not paid hush-money is merely laughable. Saying "I never paid off anyone to remain silent" strains all credibility when Corapi turns around and sues "her" as soon as she does decide to talk — even when this talk is not to the press or the law but to Corapi's rightful religious superiors. Such "severance agreements" may be "standard" if you have a temper like Oprah or a "Weiner" like Anthony, but they are hardly "common" outside the world of big money and small morals.

And finally, Corapi's investigation and resignation explanations could really be lumped together, because they rely on a similar mixture of baloney and bravado. With his outright dismissal of both the legal and moral qualifications of SOLT's "so called fact finding team" and its "so-called evidence," Corapi is either bluffing four aces with a pair of twos, or he is so blinded by all the BS-Dog propaganda that he has come to believe it himself. For as much as I hoped my prediction that Corapi's lie "that if I were to commit to the Society...I would essentially crawl under a rock and wait to die," would become the BS-Dog's immoral mantra was false, the fact that he again repeats it both in his hole-y SOLT defense and in his ridiculous "Harley-Biker" video ("looks like a late mid-life crisis" says my wife) not only proves the prophecy true, but shows that John Corapi is now on the same road that Martin Luther once was.

In other words, by scoffing at the opportunity of returning to the SOLT community, and declaring the humble but holy choice of celebrating the Eucharist (which as late as June 23, Corapi called "the primary reason a priest is ordained") and hearing confessions not even an option, Corapi finds himself at the same spot as Luther did after posting his Ninety-Five Theses but before his excommunication and split with Rome. "Before God and all his creatures, I bear testimony that I did [not] desire to undermine the authority of the Roman Church or Papacy [and] will commit the most brutal murders [on those] who refuse him," declared Luther shortly after posting his theses, but not long afterward the Reformer called the cardinals who questioned him, "empty declaimers, impious authors [and] theological abortions," and the Church Fathers and the Pope "asses, beasts [and] antichrists." Likewise, Corapi (who like Luther seemed to go downhill when he lost his zeal for the priesthood) still declares as the BS-Dog, "I love the Catholic Church...and will defend to the death the Church's right to proceed" in his case, but then calls these same bishops and supervisors "immoral leaders" who "threw me under the bus...threw me out like yesterday's garbage [then] shot me in the head and watched me bleed to death." As Fr. Joe Jenkins says, what "really upsets me about this situation is how one segment of the Church is set against another. Father Corapi comes under investigation and [says] that the bishop and his superior have a right to do what they do; but next he [calls them] the real enemies of the Church. Then he claims obedience but his personal corporation makes a statement that they are under no one's thumb...Critics and fans of the priest can now take their pick and decry the other side as wrong-headed or evil. The impression is given that the Church is fighting with herself."

In Luther's case, history shows he was also fighting within himself as schism drew near, declaring to a friend, "I am at a loss to know whether the pope be antichrist or apostle." Furthermore, Luther himself writes (in his treatise against "The Mass and the Ordination of Priests") of a midnight encounter with Lucifer where "the devil spoke against the Mass, and Mary and the Saints," but gave him "the most unqualified approval of his doctrine on justification by faith alone." I don't know what kind of midnight meetings Corapi is now a part of, and can only guess what kind of contradictory statement he will utter next. But if Fr. Joe's discernment, that the "manipulation of good men behind all these tensions...is due to evil human machination and/or to the intrusion of something devilish," I would be foolish to dismiss The Black Sheep Dog's howlings as a mere "dispute among monks."