Cheer, Cheer for old Notre Dame
Wake up the echoes cheering her name,
Send the volley cheer on high,
Shake down the thunder from the sky. — from "The Notre Dame Fight Song"
I love Notre Dame and this is the first time I've ever picked against Notre Dame...I have a statue of myself [at ND] but I've been married for fifty years and if I have any hope of making another year, I better not cheer against her son...[let] the world know I'm for the South Florida Bulls. — former Notre Dame coach and current ESPN analyst Lou Holtz 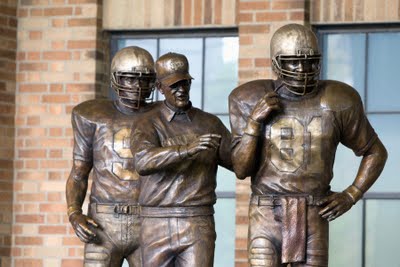 #9, Lou Holtz, and #81Tim Brown
When Lou Holtz, who has never before predicted an Irish loss, actually calls for a Notre Dame defeat, you have the feeling that something is up. But when thunder — and lightning — seemingly sent by heaven itself isn't enough to turn the tide of Irish turnovers, you start to wonder if Brian Kelly will ever return the Fighting Irish to its storied glory. And, after watching Lou's son, Skip Holtz, out-coach the much-hyped (and very hyper) current Irish head coach, I'm pinning all my hopes not on Kelly but on the permanent promotion of his little-heralded second-string quarterback Tommy Rees.

The afternoon in South Bend started out beautiful and hot, and so did the Irish. After beginning the game's opening drive at their own 20, Notre Dame, behind 2010 starting quarterback (and recently anointed starter for 2011 over last year's hero Rees) Dayne Crist, moved the ball almost effortlessly 79 yards to the Bulls 1. Indeed, when starting running back Cierre Wood (104 yards on 21 carries) was replaced by the bulkier back Jonas Grey to bowl over the Bulls from a yard away, the Irish touchdown seemed a foregone conclusion. But just when visions of National Championships began dancing in Irish fans' heads, South Florida star Kayvon Webster stripped the ball from Grey and rambled 99 yards the other way, and instead of touchdown Irish, the scoreboard read 7-0 Bulls.

If this 14-point swing tempered the Irish fan's enthusiasm, it seemed to totally deflate the confidence of the strong-armed but fragile psyched Crist. After completing six out of his first eight throws, Crist made good on only one of his last seven, his lone completion going for no gain. When he finally led the Irish back into the Red Zone (largely through Wood's runs) midway through the second quarter, Crist was intercepted in the end zone on third and goal from the four when he under-threw his receiver so badly it was like he was throwing to Bulls defensive back Devekeyan Lattimore rather than Irish wide out Theo Riddick. But Riddick (3 catches for 31 yards) did not do Crist (or the Irish) any favors either; not only did he drop more passes than he held onto, but his fumbled punt at the Irish 20 led to one of three Bulls first half field goals, and about the only positive thing you can say about South Florida's 16-0 halftime lead is that it could have been worse.

And if the first half wasn't strange enough, the halftime "festivities" were truly bizarre. Citing a coming storm, a meteorologist ordered an evacuation of Notre Dame Stadium, and an over two hour "weather delay" ensued. If you are used to seeing the Irish play not only through driving rain but snow, and thus were left scratching your head about the first-ever weather delay in the Irish' 123 year history, you were not alone. Still, after last year's weather-related death of team manager Declan Sullivan, one would figure that the politically-correct Irish are going to err on the side of caution, and the game would have to wait until any threat of lightning passed by. Besides, it not only gave the favored but battered and bruised Irish some extra time to regroup, but Kelly some extra time to rethink his starting quarterback, and judging from the way Notre Dame came out of the tunnel to start the third quarter, they used it to their advantage.

After the Irish defense forced the Bulls into a three and out, the Irish offense, now led by the back-up Rees, immediately went on the march down to the Bulls six. But just as in the first quarter, a seemingly sure-thing opening Irish drive was stymied when Notre Dame receiver T.J. Jones was not ready for a Rees pass, and the ball bounced off Jones' helmet into the waiting arms of a Bulls defender for a frustrating interception. But unlike Crist, Rees seemed undaunted by such adversity, and came back to lead the Irish to three second half touchdown drives and one short field goal attempt. Unfortunately, this error-packed Irish contest would also be the day that the always reliable Notre Dame kicker David Ruffner, who hit on 23 of 24 attempts last year, would miss a short field goal for the first time in his career, and this proved to be the margin of defeat.

Although the Irish gained twice as many yards as the Bulls (508-254) they also committed five turnovers to the Bulls' zero. As for the Irish defense, led as usual by Manti Te'o (nine tackles, one sack) it generally performed well, but once again seemed to play just well enough to lose. Sure, they let up only one touchdown, but this touchdown, coming after Ruffner's missed field goal, came at precisely the time they needed to hold, to pick the offense up and give the Irish a reasonable shot to win. This, combined with several late hits that kept Bulls' drives going, reminded one more of the undisciplined squads under Weis and Willingham than a true BCS contender.

On the other hand, Rees remained a revelation, completing 24 of 34, passed for 296 yards and two TDs in the near second half comeback, while Michael Floyd was magnificent, catching twelve passes for 154 yards and two TDs, with ten of those catches coming in the second half on balls thrown by Rees. But as well as Michael played, I hope Kelly, who let Floyd (his only legitimate big game receiver) start despite three alcohol-related violations, is currently watching his disciplined star closely, because Michael is on a zero alcohol policy now, and this last game would drive even the strongest willed of Irishmen to drink.

But if this game points out the lack of real physical and mental progress the Irish have made since seemingly turning the corner last season, the lack of spiritual progress was even more poignant. It is one thing for Notre Dame to be out-coached by an opponent at home, but when the opposing coach is also a more devout Catholic than Notre Dame's, your last reason for hope seems to fly out the window. I can see why Lou Holtz would choose to root for his son, but this pick feels like a veiled diss of the administration by the father, in effect saying that if his son Skip were coaching here (as Lou feels he should be) then he could also still root for his mother, the Lady on the Dome. And then there are those (including my wife) who can no longer root for the Irish as long as Lizzy Seeberg's perpetrator still plays for them...

Meanwhile, I am of the growing group of die-hard fans who pin their hopes for the 2011 Irish on the slight-but-mighty shoulders of young Tommy Rees, but as an orthodox Catholic, my Holtz-like dilemma still remains. Because the Notre Dame media guide has become so vague about the player's Catholicism (or lack of it), I have no idea if Rees is a devout Catholic, or even a Catholic at all. Notre Dame seems proud to proclaim Te'o's Mormonism, but apparently they are far less proud to say a player frequents the grotto or goes to daily Mass. So for now, I can only pray that as a natural-born leader, Rees has as much of a heart for Notre Dame as he does the Irish.

But as Lou Holtz once again returns to cheering for Notre Dame every week, the NBC coverage of the story has taught me an important fact about his monument outside the stadium. While most people assume that the player with the #9 jersey next to Holtz in the tribute is Tony Rice, Holtz' All-American quarterback who bore that number, it is really the likeness of a little-known Notre Dame walk-on who also wore #9 — none other than Lou's son, Skip. Which, when all things are considered, can only mean one thing. And that is, while you can occasionally bet against Notre Dame, never bet against a Notre Dame statue, especially when one of its figures is still commentating and the other is still coaching.