In the days of doubts, in the days of oppressive reflections concerning the destiny of my native land, you alone are my strength and staff, O great, mighty, true and free...if you were not, how could one do anything but fall into despair at the sight of all that has taken place in our homeland? -Russian novelist Ivan Turgenev

While I will not be continuing in this race...I thank the Lord God Almighty and this republic...I will always believe in the greatness of [America] and the greatness of our God. -Michele Bachmann, from her concession speech

Game on. -Rick Santorum, after his "tie" in Iowa 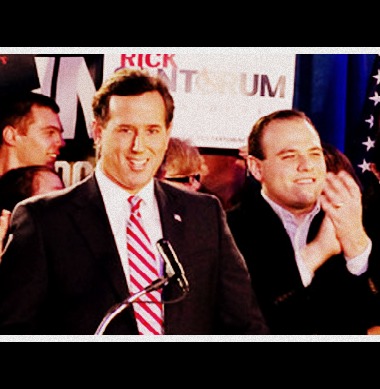 As stunning as Rick Santorum's miraculous "second place" finish (the unofficial total had Santorum losing by a mere eight votes, although another caucus source, citing Romney shenanigans, had Santorum up by twelve) in Iowa was, the former senator had little time to celebrate if he hoped to replicate his David v. Goliath feat in the far less friendly (to Christians anyway) state of New Hampshire. The good news; that Bachmann dropped out, that Santorum's national numbers were rising, and that his campaign (after struggling to take in a few thousand a week) was now raking in a million dollars a day, was dwarfed by the fact Rick Perry stayed in, Romney was still up in New Hampshire by thirty points, and Mitt often spent a million dollars a day before breakfast. The game may be on, but the oppressive "days of doubt" had just begun.

While it is much easier to predict Rick Perry's staying will hurt Santorum more than Bachmann's exit will help him, there is much to learn from Michele's ugly finish and graceful departure. It doesn't take a political genius to see that Perry's silly jumping back into the race (was his Texas A&M jogging suit picture supposed to show his sex appeal to middle-age southern woman?) makes the Texas governor the potential spoiler for Santorum's hopes in South Carolina, just as Fred Thompson was for Mike Huckabee in 2008. But Bachmann's "Christian" Tim Tebow TV ad provided the perfect example of what Santorum isn't — and what his candidacy should never be.

Stealing the Tebow comparison from Perry, who was the first to say "I hope I am the Tim Tebow of the Iowa caucuses" (a rare Perry prediction that came true, although not in the way he envisioned), Bachmann then made this infamous ad comparison; "The establishment...loves to hate Tim Tebow. He's not smart enough...he's not accurate enough...he's a born-again Christian...but he just keeps on winning. Well, the same could be said of Michele Bachmann. No baggage, Christian and...she just keeps winning votes." Not only was Michele's timing extremely unfortunate (after six dramatic wins in a row, by the time Iowa happened, the likable Tebow had lost his last three games in convincing fashion) but her conclusion was largely inaccurate. Michele did not lose Evangelical-friendly Iowa because she was a Christian, but because she dismissed the more devout Christian (Santorum) and imitated the one who had more money (Perry).

New Hampshire, on the other hand, is a different story. I'm not saying there is no Christian media (or voters) in the Granite State, but Santorum has gotten about as cordial a reception there as Christ did before the Sanhedrin. Actually, now that "Rocky" Santorum (wisely Rick has accepted the comparison between himself and an underdog fictional sports hero instead of an actual player who fell apart prior to the playoffs) has made it to the big time, he has had to fight the punches of three different opponents simultaneously. First, I think Santorum's counter-punches against the other candidates have been particularly effective. Not only did the voters not take Rand Paul's (son of "mad doctor" Ron Paul) claim that Santorum wasn't really pro-life seriously, but it got fellow candidates Newt Gingrich and Perry to publicly adopt Santorum's stance that abortion should be illegal even in cases of rape and incest. Furthermore, it actually provoked some usually non-committal pro-life organizations to speak out in favor of Santorum and against Paul. "It seems [Paul] values reducing the federal deficit higher than human life," said Keith Mason, president of Personhood USA, adding he had "serious concerns" about the other life stances of the man who made millions on racist pamphlets bearing his name in the 1990s and accused George W. Bush of "staging" 9/11 so "W" could invade Iraq throughout the 2000s.

Second, I've thought Santorum's sparring with the MSM, while not a knockout, has at least scored a decision for the Roman Catholic "Rocky." Although battered by CNN John King's attempt to paint him as "racist" and "religious extremist" (if only because King rarely let Santorum get a word in edgewise) Santorum nevertheless remained calm and answered that although his Catholic faith taught him that not only abortion but contraception was wrong, he had never imposed the latter on his constituents, and would not do so as president. When King smugly asked if Santorum said to his wife "I told you so," Tuesday night after his "victory" (Santorum had been steadfast in his conviction he would win or come in second in Iowa while his wife wasn't so sure), Santorum got the last laugh when he replied, "[a]ctually we were watching you on CNN to get the final results, but before we did she fell asleep."

Which brings us to Santorum's last battlefront, the voters in New Hampshire themselves. Many of you have seen the Concord College convention footage where Santorum was roundly booed for his views on gay marriage. While I don't think Santorum handled it as poorly as many liberal pundits proclaimed, there are a few "halftime adjustments" I think Rick could make in going forward. Although I like his idea of dialoguing with the students, instead of starting out asking, "[a]re you saying that everyone should have a right to marry?" (for this too-broad statement would include children and even those currently married to another), perhaps he should begin with something like, "[s]hould any two consenting adults be allowed to wed?" As this question draws almost universal approval on most campuses, I think Rick should then proceed not with the example of polygamy, as he did that day, but with the example of brother and sister or father and daughter to show how their logic then degenerates. Still, even if he handles it flawlessly and doesn't get flustered (as he did briefly then) chances are he will still get heckled, for as former presidential candidate Huckabee said while examining the video, "[w]e now live in a post-Christian culture in America, so such scenes are becoming the norm rather than the exception."

Does this mean Santorum is doomed unless he compromises his message? While most talking heads (even the few who like Rick) seem to think so, I believe just the opposite. Although Santorum doesn't have to go out of his way to talk about abortion or gay marriage, when asked he has to be ready for the worst, in order to answer his best. Instead of being less "Catholic," I urge Rick to an even greater practice of his faith, to not only pray and attend mass on Sunday but to say the rosary, study the Catechism, and go to mass daily, so the grace he receives from the Holy Eucharist will lead to an even more powerful, more filled-with-the-Holy-Spirit answer each time his beliefs are challenged. As Huckabee stated, "those who are heckling are probably not going to vote for you anyway," but there are always those quiet undecided souls in the crowd longing not for vague talking points (like Obama and Romney recite) or even a devout-but-lacking-depth faith like Bachmann or Perry, but someone who speaks the Truth with knowledge and conviction. You still may not win, but you must go out each day with the "full armor of God" (Ephesians 6:11) in order to stand a chance.

Like Turgenev (although the author writes about nineteenth century Russia, it might as well be twenty-first century America), I am sometimes tempted "to fall into despair at the sight of all that has taken place" in my homeland...and then something wonderful — or dreadful — happens that brings me back to He who is "great, [Al]mighty and true." Wonderful like the unexpected showing of Santorum in Iowa; dreadful such as the way he has been treated in New Hampshire. But just when I am about to settle for and accept the secular Republican sages' wisdom that Santorum's passionate Catholicism can't win and that Romney's moderate Mormonism is not cult-like, none other than my RenewAmerica editor, devout Christian Stephen Stone, intervenes.

Amazingly at the very moment I am about to waver, Steve e-mails the staff with an advance copy of A Mormon Story, his new book detailing how he not only just endured a decade of "unlawful, un-American, unconscionable persecution" at the hands of the "secretive and abusive" leaders of the Mormon Church, and later answers me with his insider's view that Huntsman is "thoughtful but liberal...wrong on too many issues," while Romney is "dishonest and crafty...unprincipled and completely unacceptable." So I must get back to work now on a man I can trust, so that we do not witness an election between two unacceptable candidates. Yes, Lord, I believe in your greatness. Help my unbelief that the greatness of America, a greatness that Santorum can restore, is not a thing of the past.