Rick is right. -Governor Mitt Romney, responding to one of Santorum's statements during the South Carolina debate 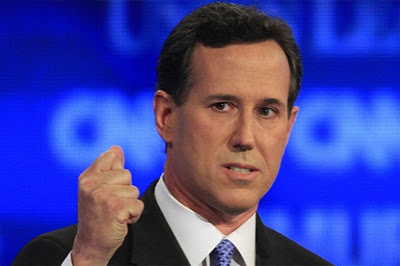 It's one thing when Rick Santorum is declared second — by eight votes — in Iowa despite widespread claims of vote fraud. It's yet another when the news stations say Santorum placed fifth in New Hampshire (behind fellow conservative Newt Gingrich) when the official tally later finds Rick finished fourth, ahead of Newt. But when Governor Huntsman drops out and Santorum still gets a sixth of the questions (in the South Carolina debate) in a five-man field, you start to wonder if the conspiracy; the Catholic conspiracy, is also "game on."

On the surface, it seems Santorum's campaign is not only doing all the right things (more about that later) but is getting all the right endorsements. Besides the "unpresidented" support of a group of 150 of the most influential Christian leaders in the country who met in Texas last week, Santorum is garnering support from groups ranging from Concerned Women for America and the National Organization for Marriage. And they are saying all the right stuff; from Tony Perkins, president of the Family Research Council (and one of the "150"), "Rick Santorum has consistently articulated the issues...both economic and social...that are of concern to conservatives," to Maggie Gallagher, the influential former chairman of the NOM; "What moved me the most were the words Rick Santorum used to 'connect the dots,' why support for marriage, life and the economy are not separate issues but bound together by principles." But the reason Rick is still trailing in South Carolina is not so much that Rick is not articulating these principles but that he is playing by them and the others are not.

While Santorum continues to run a clean and honest campaign, the others have done quite the opposite. Perry's attacks on Romney of "vulture capitalism" and on the others as "Washington insiders" are so juvenile and uninformed that most pundits agree he has lost all credibility. On the other hand, one is tempted to say that Ron Paul's presidential campaign(s) never had credibility, but the fact he has built up a sizable band of steadfast if unstable followers is a testament to the desperateness of the times. That Paul has made his reputation on a web of conspiracy, race-baiting, and lies (Paul consistently took credit for new-letter lines such as "the government created AIDS," and "[w]e can safely assume that 95% of the black males in Washington D.C. are...criminal," until 2001, when he about-faced with "...those words weren't really written by me"), shows that either his rabid group of disciples haven't thought enough to even examine their hero's integrity, or, more chilling still, have and still don't care. The "Paul-en angel" might not have enough minions in his cult to garner the nomination, but a third-party Paulian run is just another Obama re-election End Times scenario that is becoming all too real.

Still, if Paul's madness is obvious, Mitt Romney's evil is much more subtle. Not unlike the Mafia boss who is charming (or at least not violent) in public, Romney rarely dirties himself on the stage, relying instead on his hit-men and their PAC attacks to blow his opponents away. That these attack ads aren't truthful (his latest anti-Santorum ad claims the senator supports voting rights for imprisoned killers and rapists, while the senator actually supported a bill for former inmates who are out and have successfully completed their parole) seems not to matter to the mighty Mitt, as long as they get him into power. Like the Mafia Don, he smiles as he claims he had nothing to do with these goons or their crimes, while later reaping the spoils. Santorum did make Romney look guilty over his PAC ads for a brief moment on the South Carolina debate stage, but Mitt quickly recovered and, putting on his most pleasant presidential face, promised to look into it before they went to commercial.

For all these Machiavellian tactics, Santorum would still have a chance if Gingrich would step aside — and, along with the Evangelicals, the pro-life Catholic leaders would support him. Long the darling of the debate fans (no doubt why he gets so many more questions than Santorum), Newt never fails to get off a few good zingers, including Monday night when he talked about how, unlike liberals, conservatives actually think work is good. But being president is not the same as being captain of the debate team, and there is a reason conservative leaders keep choosing Santorum, a man who can not only talk the talk but who has (in both public and private life) walked the walk, over Gingrich. With his ridiculous "When Romney comes to town" PAC ads, Newt has not only lowered himself to Mitt's level, but actually helped his opponent by making an anti-Republican anti-capitalism attack on Romney's days at Bain Capital. As a professed friend of Santorum, I hoped the new Catholic "Newt" might drop out so that the longstanding, steadfast Catholic could present a unified conservative option to the "Massachusetts moderate," but as long as there's a debate to be had and an ego to be stroked, it appears the old Newt still holds sway.

Which leads us back to the pro-life Catholic leaders, a group that, even in this eleventh hour, could still "steal" the election for Santorum. While some, like former ambassador to the Vatican, Mary Ann Glendon (perhaps her time as Harvard professor has softened her to the charms of the "Mass. mod."), are openly endorsing Romney, and some, like Catholic apologist Jimmy Akin, who says, "to elect a Mormon, a polytheist who presents himself as a Christian, would be a disaster," are boldly denouncing Mitt, few are both warning against Romney and recommending Santorum. Still, worst of all are the Catholic bloggers like Mark Shea, who endorse nobody but still mock Rick.

In his log-in-his-eye post, "Murderers for Jesus," Shea takes to task Santorum for his provocative (if out of context) quote, "On occasion scientists in Iran working on the nuclear program turn up dead. I think that's a wonderful thing," and immediately compares Santorum to Planned Parenthood abortionists. "There's a reason for the Just War theory," the smartest-guy-in-the-room Shea pontificates, and "Santorum should try to learn it." While there is no doubt that Shea knows a lot about Catholic doctrine (for he has more time to study Church teachings than Santorum), his dismissal of Santorum based on one off-the-cuff campaign comment, considering the countless faith statements Rick has made that are rock solid, leaves one to wonder about the basis of Shea's bitter motives. It's one thing to teach by knowledge, it's quite another to condemn with it.

Indeed, by saying Rick's endorsing of the killing of an Iranian nuclear scientist is definitely not part of a "Just War," Shea is calling himself not only a scholar but a theologian (and one who makes magisterium-like decisions at that) and by declaring the scientist is certainly not an enemy combatant but merely a civilian is making himself not merely a U.S. citizen but a U.S. intelligence agent as well. Rick might be overzealous in his applying the Just War theory when it comes to defending his country, but trashing a Catholic candidate who, with the help and support of his wife and seven children is trying to live out his faith in the most difficult of places, is not only the height of hypocrisy, but the very definition of cowardice. Perhaps when Obama is re-elected and the Catholic blogs are silenced as purveyors of hate speech, Barack will let Mark keep his, since his writing did more to ensure Obama's re-election than most of his henchmen. On the other hand, if Romney wins, I'm sure he could always use a good PAC writer.

Back home, my wife is pleased to show me that her new site, Adoration for Santorum, now has people praying to Jesus for Santorum not only across the United States, but in Pakistan and Germany as well. I'm sure Rick would agree that this is the wonderful thing about being a Christian...there's always hope as long as you have a prayer. And when you have prayers from around the world, sometimes even PAC attacks and bloated bloggers aren't enough to stop you. Right, South Carolina?