Tom O'Toole
Mormons, contraception, and Santorum: will Rick be 'pierced' by Macfarlane's 'sword'?

John Lanning was a bishop in the Church of Jesus Christ of Latter-Day Saints, [and] the director of public relations for LDS...Lanning's job was simple: foster in the minds of Americans that the LDS was a family-oriented, harmless, and ordinary Christian church...For over forty years Lanning had served the LDS diligently and brilliantly...and by the 1990s his public relations campaign had worked...[but] over time Lanning's attitude toward his religion had changed from unthinking acceptance to an exciting search for inconsistencies...his doubts increased...Lanning...considered suicide. He could no longer pray because he no longer believed in God — or at least...not the cartoon Mormon version of gods. "Who are you!?" John called out, his voice filled with misery. "Are you Lucifer or Jesus or something else?" -from Pierced by a Sword, by Bud Macfarlane Jr.

Lanning had been dead for twelve minutes by the time the ambulance arrived at the LDS hospital. Lanning entered a tunnel of light...and a being of light stood at the end of the tunnel...the being took the form of a woman...in a [black] hooded garment. He was anxious to see her face...but when he did he screamed. There were dark holes where her eyes should have been, and giant warts on skin as old and dry as the desert...her name...was Death. "Contraception, my sweet. Contraception has made you mine!" she cackled, as her skeletal fingers beckoned him to...the flames [and] the lake of fire. -from Pierced by a Sword, by Bud Macfarlane Jr. 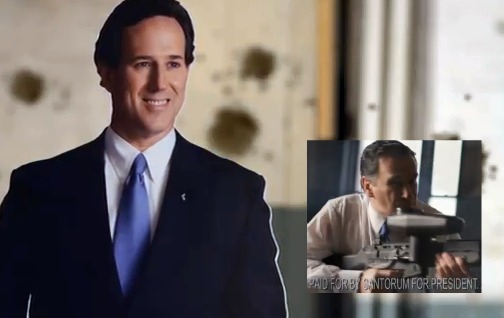 Having just finished re-reading Bud Macfarlane's Pierced by a Sword, his classic 1995 novel of Catholic apocalyptic apologetics, I am struck by how much his prophecy comes into play in the 2012 presidential election. For if Michael D. O'Brien's novel Father Elijah correctly predicted the increased promotion of abortion and loss of religious liberty the election of an Obama-esque president would bring, a "Pierced" Romney-like character shows that going from a lying, smiling socialist to a smiling, lying Mormon is like going from, well, the frying pan into the lake of fire. But if John Lanning escaped the flames (if not martyrdom) perhaps Pierced says there's still hope for us (and the US) too...

If O'Brien's tales endure due to their almost mystical theological depth, Macfarlane's succeed because of the utter simplicity of their Catholicity. This amazing fictional account of how a small group of Catholics, including stalwarts, reverts and converts, are called from across the country to band together in South Bend, Indiana, to save the world by proclaiming, with the help of modern technology, the gospel warnings of the various Marian apparitions is music to any orthodox believer's ears. Of course, to a Domer who blogs as Fighting Irish Thomas, the storyline, especially the climax when the exiled Pope Patrick I is called by the Holy Spirit to Notre Dame and given one last shot to convert the masses by celebrating a Mass on the steps of the Golden Dome just as the conquering World Union armies are about to blow it apart, is simply irresistible. True, because of the period piece nature of Bud's book, some details already seem dated — the "cutting edge technology" used to get the word out, included fax machines, "cellular" phones and a new computer tool called the "Internet," but its message remains timeless. Still, as much as I want to focus on the timeless factors, I must date this review by concentrating on a part of the story in an attempt to save something that has the potential to save the world; namely, the 2012 presidential election, stating with the Republican nomination.

Although Pierced (like Father Elijah) contains an anti-Christ Obama-esque character with the fitting name of Harlan Gello (whose "Omega Center," having eliminated many of the elderly and "retarded" are now applying the final solution to unenlightened clergy and priests) it also includes the Mormon saga of John Lanning. Until reading this novel I not only had no idea of how screwy and secretive this so-called Christian sect was, but how cutthroat of a political organization this cult really is. And, as crazy as the LDS's theological "diversions" are, including "Lucifer is the defiant brother of Jesus," and "every Mormon who is 'exalted' will become [like Jesus] the god and king of his own planet after death" (Pierced, pgs.155,157), Jimmy Akin, perhaps the most respected Catholic apologist writing today, notes that the main reason Mormons cannot be considered Christians is that they do not believe in "the central mystery of the Christian faith...the most Holy Trinity" (CCC 233). According to Akins, the "disaster" of a Mormon president is due not only to the fact that "it would spur [Mormon] recruitment," but "would mainstream the idea that Mormons are Christians, and that polytheism (which is what Mormonism really amounts to) is somehow comparable to Christianity." Still, the real root of the problem, in the eyes of Akins, is not even that Mormons are polytheists, but that they are the only polytheists claiming to be Christians. And, in the words of Macfarlane, they will do anything to accomplish their goal.

In Pierced by the Sword, John Lanning, after being granted his vision of hell, is brought back to life, and almost immediately converts to Catholicism — and then exposes Mormonism as the dangerous cult it really is. The LDS's million-dollar smear campaign on him does little damage to the media-savvy Lanning, so finally, while he is converting thousands of Mormons on the streets of Salt Lake City during the great Tribulation, he is assassinated by one of the Council of Fifty (the LDS's shadow government/police force) and later, when only the faithful remnant remain on earth, Lanning is declared a saint. Granted, the Romney camp is thus far only guilty of a multi-million dollar character assassination of Santorum (and the others) but their smear not only gives credence to the belief that Mormons will do anything necessary (including outright lies) to win you over, but adds a certain poignancy to Rick's seemingly silly commercial, where a figure who looks a lot like Romney is trying to shoot Santorum — only to find that Rick has tricked him and he is really shooting at a cardboard cutout of his Catholic nemesis.

And if the Mormon angle wasn't enough; contraception, which has amazingly become a major issue in the campaign, was a prime theme in "Pierced" as well. Not only was Lanning shown he was deserving of hell for contraception (despite the fact they used it to put off babies so that they could evangelize) but Nathan Payne, another main character, is converted when God gives him a vision of not only what the sons he fathered while sleeping around (and were killed by abortion) would have looked like, but of his two daughters "who had been destroyed because the pill did not allow them to adhere to [girlfriend] Gail's uterine wall...the second day of their life" (Pierced, pg. 293). Whether Santorum has handled the contraception issue as wisely as Macfarlane (or Pope Paul VI) is a debate for another day, but for those sincere Christians and lukewarm Catholics who are still baffled by Santorum's "staunch" contraception stance, Pierced by a Sword (not to mention "Humanae Vitae") is well worth the read.

As I write on this Ash Wednesday, on the eve of the important Republican primaries in Michigan and Arizona as well as the date of yet another crucial Republican debate, I can think of no more fitting (or entertaining) book to recommend for Lent than Pierced by a Sword. Read it while there is still time, and share it with a friend so that, whether by deadly socialist or lying Mormon, they are not fooled again. I'm not sure about you, but if we can be spared the Tribulation by prayer, fasting...and Santorum, I'm all in.

Pierced by a Sword, or Macfarlane's other two classic Christian novels, can be purchased for FREE (and a $1.00 shipping fee) at catholicity.org; (click on "free novels"...you'll be glad you did!)