Thank you for your support, for your encouragement, and for your prayers for our family, especially Bella...Suspending my campaign for President of the United States has been one of the hardest decisions Karen and I have ever faced...because I know my candidacy has offered you a way to fight for your convictions, and I do not want to let you down. — Rick Santorum, from his official website suspension statement

I am sad. There's been an enthusiasm gap for Romney from the get-go. We will work for Romney...but we had so much enthusiasm for Santorum and what he stood for — his character, his integrity. — Alexia Newman, head of a crisis pregnancy center in Greenville, SC, who also served as a liaison to SC's evangelical pastors. 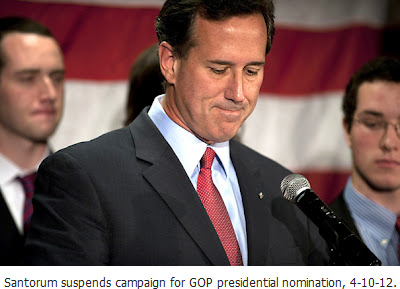 During his Easter Monday homily, one of our local priests, citing an ancient saint, said that during the Easter season, because of the unsurpassed joy of the Resurrection, "Christians are not allowed to be sad." Still, after hearing Santorum's fateful announcement Tuesday, I found myself siding with Alexia instead of the homilist. Surely heaven gives an Easter "blues" exemption for an Irishman, especially when the mourning involves the rare case of an honest politician...

Just as the odds were long for Santorum from the beginning, the reasons for his departure from his amazing race were legion also. As Santorum accurately stated, he won more counties (the vote of the "little guy") but without the support of the Republican brass and the way the primaries were set up, their votes did not translate into (enough) delegates. Not only did Rick lack the endless parade of GOP endorsements that Mitt brought, but Romney's endless stream of money bought a tsunami wave of Santorum attack ads. These ads flooding every major market with lies that, while disgusting to the informed evangelical, were enough to sway the casual Republican voter and carry the close states. Finally, on Good Friday, when Santorum's few wealthy donors (citing Texas' refusal to make the state a winner-take-all delegate count) threw in the towel and Bella entered the hospital for her second emergency in two months, Santorum knew he was through.

As Senator Santorum surmised and Ms. Newman accurately summarized, there is both sadness and disappointment when the good man, the virtuous man, finally goes down. If he could only hang on in Pennsylvania, you thought, and hold out until Texas...he could disprove that cynical theory that the man with the most money always wins! But in reality, Santorum was already broke, and while Gingrich (who was reportedly 4.5 million in debt) joked about bouncing a five hundred dollar primary fee check to the state of Utah, Rick risked the far more serious prospects of bouncing his daughter's college tuition checks if he stayed in. Still, if the devout Protestants proved that prayer and spare change could get a committed Christian halfway there, Santorum's quixotic quest also showed that without the equally fervent support of devout Catholics, such a bid will always come up short.

Ironically, Santorum's "Catholic problem," as dubbed EWTN, was depicted perfectly one final time on Easter Sunday in the person of Cardinal Timothy Dolan. Responding to a Bob Schieffer question on CBS's Face the Nation, Cardinal Dolan, sounding more like a waffling political candidate than an unwavering orthodox prelate, somehow managed to agree both with John F. Kennedy, who said in his infamous "religion" speech that the separation of church and state "should be absolute," and also with Rick Santorum, who said those same sentiments made him "want to throw up." Dolan then compounded his duplicity by stating that, while there may be reasons (lack of "character and integrity" perhaps?) not to vote for Mitt Romney, his Mormonism "is not one of them." Although Dolan's take on Kennedy's speech (he at least could have agreed with Archbishop Chaput, who called JFK "sincere but wrong") probably doesn't rise to the level of deception that, say, Father John Jenkins' misinterpretation of "Catholics in Political Life" (which allowed him to honor Barack Obama at Notre Dame) did, it does dramatically demonstrate the lukewarm Catholic support for Santorum that doomed his campaign. At the same time, while Dolan's statement on Mitt's Mormonism may not rise to the level of scandal, it lacks both the prophetic insight and potential heroism of Jimmy Akin's stark claim that Romney's election "would mainstream...the idea that Mormons are Christians, and that polytheism is somehow compatible to Christianity."

Way back in "Santorum forum I," I mused about the possibility of an election pitting the dishonest socialist against the pollyanna polytheist, and prayed I would not be put to that test. Now, faced with this very real decision, readers no doubt wonder if I can now support the at-least-currently conservative Mitt Romney against the no-doubt culture of death Barack Obama. And here is my answer: if Mitt picks a committed Christian pro-life VP (such as Santorum) I'm in. If not, I'm writing someone in or going third party, and praying that when the Lord comes again (probably within the next four-year term), I give a better answer to Christ than Dolan did to Schieffer.