Tom O'Toole
Our Lady of Guadalupe: a revelation wrapped in a mystery inside a miracle

I cannot forecast to you the action of Russia. It is a riddle wrapped in mystery inside an enigma; but perhaps there is a key. — Winston Churchill, in his first wartime broadcast 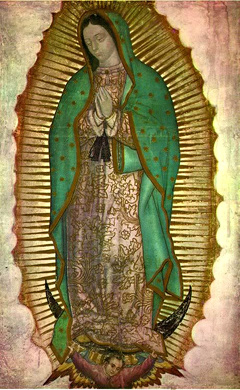 That Churchill's famous wartime statement about England's "ally" was also said about a country (like Mexico) that had a great devotion to Our Lady, despite government's every attempt to wipe out Christianity in the land, may be one of history's more interesting religious coincidences. But whereas the loyalty of Russia was "a riddle wrapped in a mystery inside an enigma," the Lady who brought faith to Mexico was a revelation wrapped in a mystery inside a miracle. But more commonly, She is known as Our Lady of Guadalupe.

From a Catholic historian's vantage point, things were so messed up at that time in history that God figured a simple revelation or mystery or miracle wouldn't do, but a combination of all three divine forces were necessary to once again stem the tide of Satan. Europe, in the throes of Catholic decadence and (false) Protestant Reformation, was fading fast; and the new world, complete with human sacrifice, wasn't faring much better. As the Catholic Encyclopedia Online stated:


Missionaries who first came to Mexico with the conquistadors had little success in the beginning. After nearly a generation, only a few hundred Native Mexicans had converted to the Christian faith. Whether they simply did not understand what the missionaries had to offer or whether they resented these people who made them slaves, Christianity was not popular among the native people.


To me, the latter is a bit more plausible; conversion through slavery is never a good mix. So Our Lord sent His secret weapon, His Mother, to fix this evil mess.

First, the revelation. Appearing as a beautiful young (and pregnant) native, the Lady from the Book of Revelation spoke.

"I am your merciful Mother," she said to recent Indian convert Juan Diego, "to you and to all mankind who love me and trust in me and invoke my help. Therefore, go to the dwelling of the bishop in Mexico City and say that the Virgin Mary sent you to make known to him her great desire," which included building a Mexico City shrine to Her Son.

As for mystery, the most obvious one in the story is the image itself. The tilma of Juan Diego has been the subject of much modern research, and a previous Fighting Irish Thomas post as well. The tilma, woven out of coarse cactus fiber, should have disintegrated after 20 years, but after 500 years, is still in perfect condition. Also, the pupils of Mary's eyes in the picture reflect the Indians and clergy present at the time of the first revelation of the image. Add the fact that no paint was used and chemical analysis has not been able to identify the color imprint. Lastly, studies have revealed that the stars on Mary's mantle match exactly what a Mexican would have seen in the sky in December of 1531. But the more practical mystery in this case is why She just didn't appear to the bishop in the first place.

Would not it have been easier for Mary to appear to the learned, powerful Bishop Fray Juan de Zumárraga than the humble Juan Diego? Does Our Lady just like to complicate matters, to make a good story? But to even ask this question is to forget "the reason for the season," the story of God humbling Himself to come down from heaven to be born as a babe to a devout but humble Virgin of modest means Herself.

And finally comes the miracle; the multilayered miracles of Guadalupe that to this day keep on coming. Yes the bishop got his sign; the requested winter roses, but so, so much more. There was the Virgin's cure of Juan Diego's uncle, Juan Bernardino, followed by Her surprise image on the tilma, an image that helped convert upwards of eight million Mexicans in a single generation, no doubt the greatest miracle of all.

So as we reach that significant milestone of 12-12-12, I hope that Catholics leave this article still captivated by the image left by Her 1531 appearance, and that Protestants will ponder its meaning in their hearts. For if one can accept a mega-pastor bringing thousands to his church with a message of health and wealth, can they not also accept the Mother of God bringing millions to His Church through an image of obedience and humility?